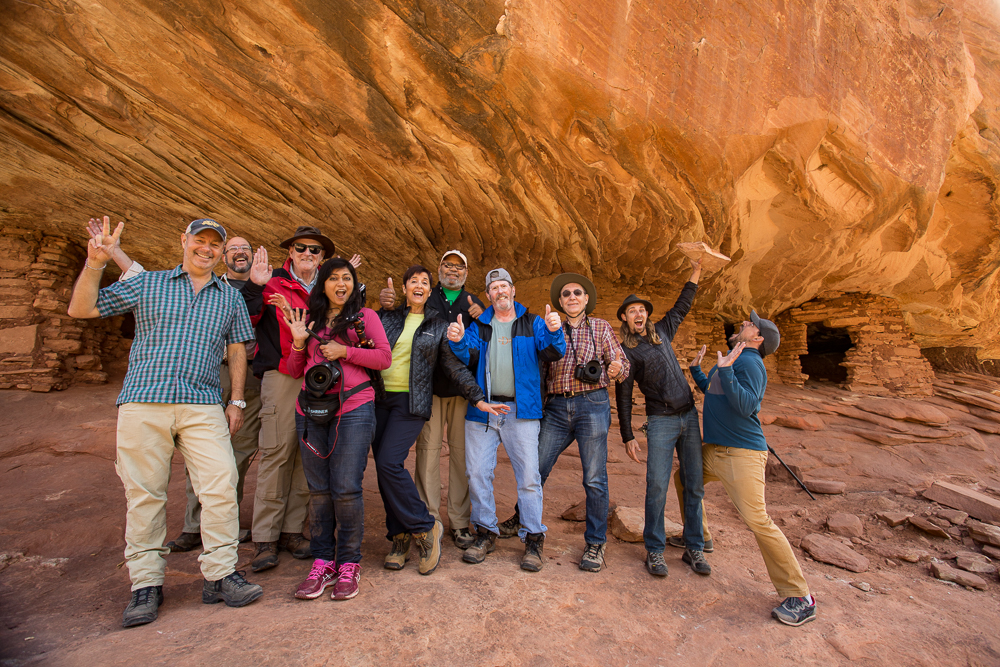 The American Southwest is a massive expanse of nearly inhospitable desert that spans four states. The bulk of this desert centers around a fascinating geological instance known as the Colorado Plateau. For millennia, the waters of the Colorado river and the underground faults, have shaped this region into one of amazing beauty and inconceivable individual formations. This puts Colorado Plateau at the pinnacle of areas for photography and documentary. The beauty here is just as staggering as its vastness, and the absolute absurdity of some of its features, has made this place a hotbed of the photographic arts. Every year, Aperture Academy makes the pilgrimage to the desert to share these extremely unique and remote areas with our clients.

Our meeting point was the hub of everything southwest, Moab Utah. People come from the world over to be hypnotized by the desert's beauty, and Moab is one of the best starting places. I was joined on the trip by fellow instructor and professional photographer, Mike Wardynski. And I think I can speak for him when I say that its always a pleasure to return to this town and have access to the many amazing photogenic vistas within such a short drive. We met our group after sunset at our hotel, and did our usual round of introductions and such, we went over the itinerary for our three-day workshop and best of all let everyone know just how early they had to wake up, and just how much hiking they would be doing!

Morning always comes unexpectedly when you are attempting photography. No matter how many times I teach workshops, or go out and shoot personally, I never really get into the swing of waking up super early every day. On this first morning, we took our troupe out to Arches National Park, home to many instances of its namesake. We were going to focus on two arches in particular for sunrise, the turret arch and the north window. So as we drove out into the darkness and then began to climb the stairs, I started to see some high wispy clouds above the turret arch, and we made the decision to stop and setup to shoot that for sunrise. And we weren't disappointed. The sun cleared the horizon behind us and lit up the sky with brilliant hues that lasted for twenty minutes. Shortly after that, Mike and I encouraged the group to explore the area and we walked around the giant arches and made photos as we went. We then ventured over to double arch, is actually bigger than the north window and help our students try to capture that monstrosity with wide angle lenses helping to distort the shape even further. After a midday break, we took everyone to a spot just north on the Colorado river for a glimpse at some ancient petroglyphs, left behind sometime in last 3000 years by the Anasazi Indians. We then made our way back into the park for the long hike up to Delicate Arch. This arch is Utah. Its on every license plate and is also one of the most iconic sights in the southwest. But first we had to hike 1.5 miles uphill to get there. And its never ceases to impress. This 65 foot high arch sits on a plateau hundreds of feet from the desert floor and is completely isolated, which a perfect view of the LaSalle mountains directly behind it. Totally worth the effort! 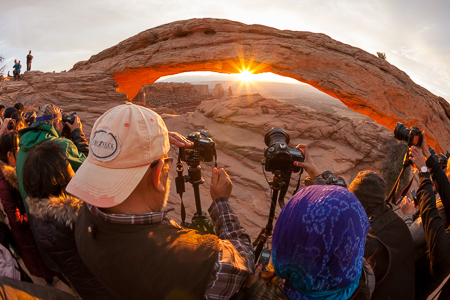 No sleeping in. On our second morning we didnt plan on shooting sunrise because we had a long drive to another awesome location. House on Fire. The best time to beat the crowds (and the harsh light) is early morning, so got started on the journey just before dawn and between the drive and the hike through the riverbed, we managed to get there right on time. House on Fire is an old granary supposedly used by the Anasazi to store food. Its location under a giant horizontal cleft in the rock means that it doesn't get much sunlight directly on its walls, and would have some time to fully suss out and explore the space. After a long while, confident that everyone had the shots they were looking for, we departed House on Fire and returned to Moab for some midday R&R, With Arches National Park having mandatory road closures, our sunset trip was cut a little short, but we made the best of it, stopping first at Park Avenue, which is a natural long corridor of high thin sandstone walls with a valley in between. This spot was made even better by the multitude of clouds that had developed in the sky. We spent some time there going over the techniques of capturing single-row panoramic images, and how best to balance the daylight and shaded areas of the canyon. Our last stop was to Balanced Rock. Again the clouds were everywhere providing for some much needed interest in the sky, as we hunted the area for interesting vantage points of the rocks and the mountains behind. Sadly, we had to be out of the park before sunset due to road construction, but it turned out to be a blessing in disguise, as we had more than enough time to get a tourist free dinner and have enough time to get to bed early before our 3am wake-up call the next morning. 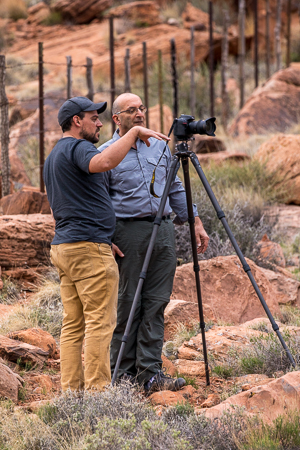 You're sometimes never early enough. After leaving the hotel at 3:30am for the drive into Canyonlands National Park, we were a little dismayed to find that at 3 hours before sunrise, we werent the only ones who decided to photograph Mesa arch for sunrise. However, the lovely group of Korean photographers (who had camped out at the arch the night before) were more than accommodating in letting us crash their party and setup for some night photography while we waited for sunrise. We worked with their group and helped to get our students some amazing shots of the arch perfectly lit with stars as a backdrop. The abundance of clouds in the sky was a little worrisome but as soon as sunrise began, the sky glowed a radiant amalgam of color and lifted everyone into a frenzy of activity, happily snapping away to grab the amazing morning light. With the droves of lookie loos coming in to catch a glimpse of the sunrise, it cemented to our group the necessity for the early rise, as nearly a hundred people came to the arch to witness sunrise. With our mission done, we all happily returned to base for some breakfast and much needed sleep. Mike and enjoyed everyone's company later that afternoon for some post-processing lessons in the conference center of the hotel. And for a couple hours we went over techniques in Lightroom and Photoshop to "sweeten" up the images that we had taken. We had one more ride into the desert that evening. We took everyone to an under visited spot along the Colorado river free from the crowds. From there we shot a couple different vantage points along the river, culminating with a gorgeous between to mesas. Mike and I helped everyone "work" the scene, as we ambled around looking for interesting foregrounds to balance out the giant tabletop mesas, reminiscent of Monument Valley. The clouds were thick, but the will was strong, and we got a shot of light just as the sun cleared below the clouds. And with that, our three day adventure had come to a close. Sharing these nationally protected areas is our passion. Having like minded folks to enjoy the scenery with and to teach and learn from is what makes these places so special. Thank you to all the workshop participants for your determination and pliability. We hope to see you all soon!