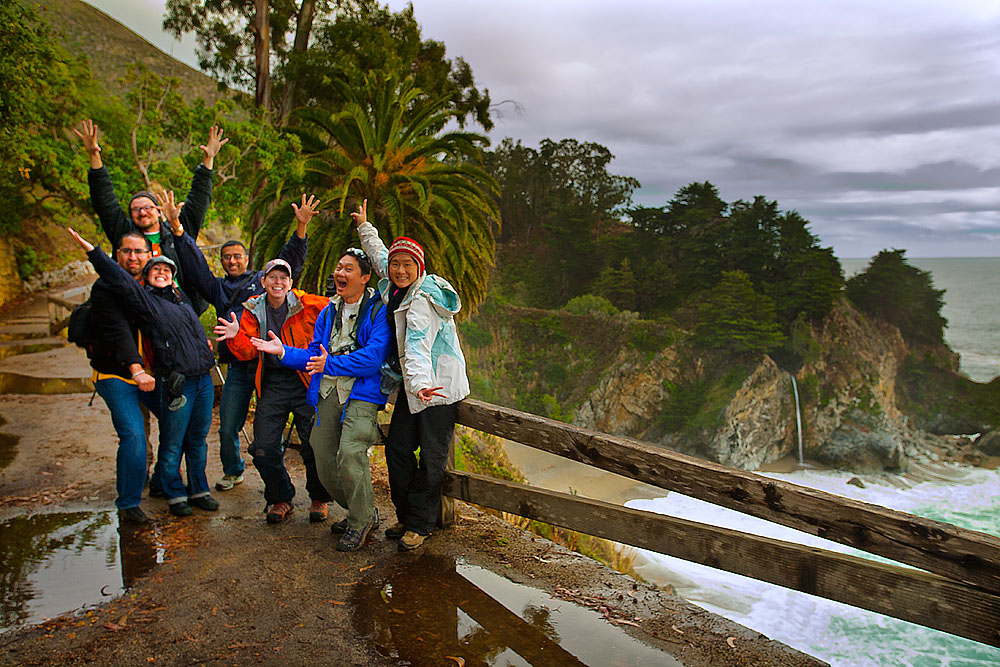 As photographers we're often in search of the perfect weather. This weather usually comes and goes at the ends of storm systems. For many who don't photograph on a regular basis in the outdoors the thought of rain and weather can be daunting. It's hard to convince people that the rain and conditions they see on the forecast is really desirable.

Luckily a group of six hearty souls took the risk and met Professional Photographer and weather enthusiast Brian Rueb for a day of photography in the Carmel and Big Sur area.

Even though it sprinkled through the morning and even a tad during the orientation Brian was optimistic that the weather was potentially going to be very good and after finding out a bit about what the class wanted to work on for their day together they set off for the short drive to Carmel Mission.

This ancient catholic stronghold used to be a meeting point for the locals in the area, and while its since been surrounded by development, it still holds much of the allure and history that it did centuries before. The class parked and worked the mission tactically exploring different alcoves and nooks as a team. Brian would go from student to student to point out interesting compositions and give insight on different ways to approach the scene.

Often places like the Mission lack the really iconic shots that a scene like the Golden Gate Bridge offers. Rather than one special shot for the mission, there are many that when combined tell a story of the location. Shooting the mission gives students a brief glimpse into the role a photojournalist would have in photographing a location.

Whether it was close ups of flowers, and interesting foliage in the gardens, or shots of ancient stairways and arches. The mission had SO many opportunities. There were great fall colors in the leaves throughout the grounds, and so many variety of plant that finding foregrounds and places to work on macro work was very readily available at every turn. 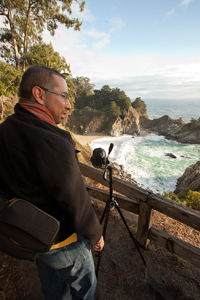 Even though we only had time for an hour in the fort everyone agreed they could've spent far more time. We had a short curvy drive down the gorgeous highway 1 ahead of us to see one of the jewels of the Big Sur coastline lying ahead of us. McWay Falls!

The drive down the coast was spectacular. The vibrant blue water crashing over the jagged rocks and sea stacks, and all the layers of cliff that are crisscrossed by the snaking Highway 1. The storm was breaking and light rays were streaming down illuminating patches of the turbulent sea. We could've easily stopped a hundred times along the way and found something beautiful to photograph, but we had a bigger fish to fry.

McWay Falls is a secluded private cove and offers one of the few chances on the coast to see a waterfall spill out and mix with the ocean waves. The sandy bottom of the cove brings out the cerulean blue of the sea magnificently. The whole area looks like it could as easily be Hawaii as opposed to the coast of California. 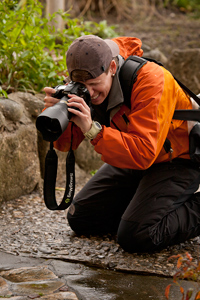 A short hike brings the class to the edge of a walkway overlooking this magnificent waterfall. Brian worked with the students to help see the benefits of the graduated filters and polarizers for the scene as well as using the curves of the terrain to help make an aesthetic composition. For some of the students who didn't have full frame sensors vertical compositions or different closer compositions could be useful to come away with great images.

The light at the falls couldn't have been better. Great sky, and the evening light illuminated the rocks and cove perfectly. Everyone was in awe of this terrific location, and had we not another location to get to I think everyone would've been able to spend another hour there easily.

The last spot for the day is the secluded, almost hidden Pfieffer Beach. Driving down this narrow one lane road the class hurried to A) find a restroom, and B) get to the beach to set up for what could be an amazing sunset. The rain that visited us in the beginning of the class, and even on the drive south was gone, and the storm was breaking up perfectly, just as hoped.

The class made its way to the beach and while a couple students stopped to photograph some reflections in a tidal pool the rest followed Brian to a spot in front of the iconic rock arch that draws the photographers in from all around to try and capture the rays of light passing through the arch and illuminating the surrounding rocks.

There was some color in the sky, but a row of clouds on the horizon kept out the really spectacular color. Despite that there was still some gold and red in the sky and perfectly awesome surf to photograph. Huge walls of water crashed into the rocks and flew out of the hole creating very dramatic long exposures.

Brian showed the class how to get right up to the edge, and time the exposures to begin with the receding surf in order to create the best movement in the images.

Those with wide angle lenses took some great shots of the whole rock arch situated like a monolith in the sea. Those without crop sensors focused on more intimate shots of the arch, rock textures, and interesting rocks near the arch. We stayed until after the light had faded and eventually everyone was able to take 20-30 second exposures that really created some great misty looking water.

Due to the extreme dark color of the rocks, Brian showed the students how using a couple different exposures could provide one with the information in order to make a more dynamic image in post processing.

The weather was great, and I think had there been more light, and folks who didn't have flights to catch we could've stayed and done some night photography as well.

It was a great day to spend photographing an amazing set of locations, and also a good demonstration on how weather can shift and give you amazing conditions even when it seems bleak

Until next time...Brian and the rest of the Aperture Academy team!