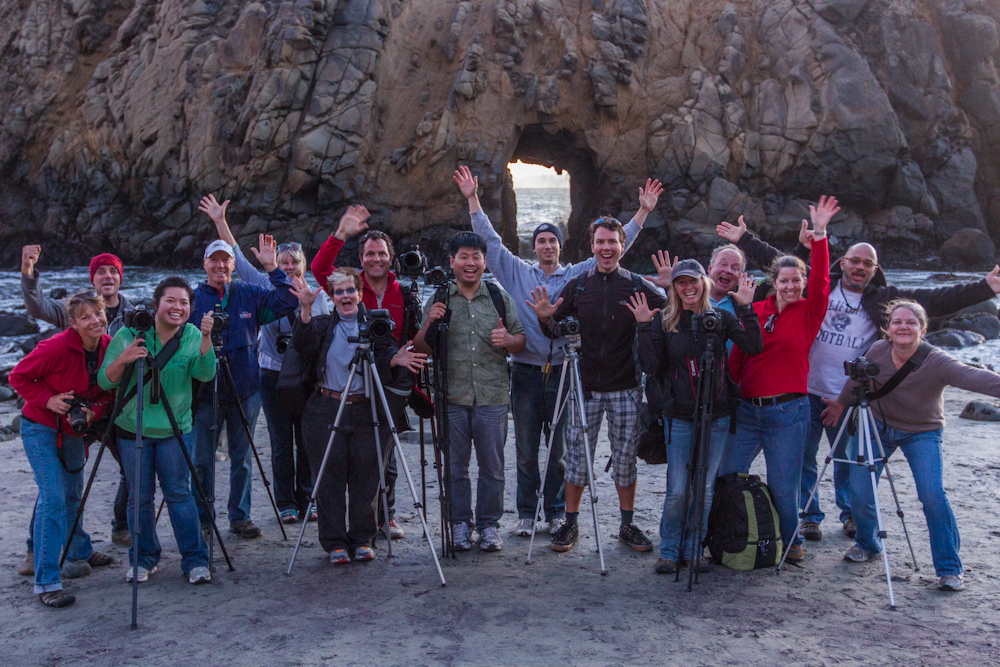 The coast of California is one of the most beautiful and expansive pristine places to photograph in the world. With hundreds of miles of coastline to explore, its photographic vistas are too numerous to name. But with regards to a specific section, namely the Big Sur portion, the fruits of millions of years of natures labors, provides us photographers in the greater Bay Area, with many of the best kept secrets in photography, right in our own backyard. With its 90 or so miles of coastline, masterfully guided by Highway 1, it is easier than ever now to explore this pristine wilderness. And with the Aperture Academy's Scott Donschikowski and Jean Day leading a group of 13 intrepid photographers, we would soon attempt to scratch the surface of California's Gold Coast.

The meetup was in the coastal hamlet of Carmel, a perfect place in which to start our adventure, as the iconic broken coast is but a short drive southward. With the weather looking ever so perfect for a day of photography, both Jean and Scott rounded up the group for a round of our customary introductions as well as en explanation of the days events. Sadly the Mission of Carmel is currently under construction and with no roof, so until early February when its slated to be finished, our instructors have opted to take our groups on an extended tour of the coastline to show off even more of this brilliantly beautiful section of California. 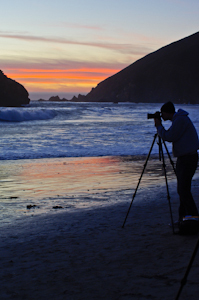 Our first stop is Garrapata State Park. The section around Soberanes Point is particularly photogenic with a a trail that winds around the rim of 30 foot cliff above the ocean. This section provides views of the north and south, with an especially beautiful view of a rocky beach and two enormous sea stacks. Jean and Scott point out how to properly compose shots for this area, as well as to use a variety of lenses depending on the desired effect. Telephotos for looking up the coast with compression, wide angles to fit in every ounce of coastline from the bluffs, and even macros to capture plethora of wild flowers abundant at almost any time of year. Further down the coast we stop a little after Rocky Point, to take in the jagged coast off in the distance and the perfectly framed Rocky Point Bridge with our telephoto lenses. 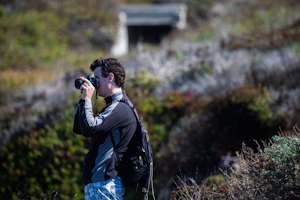 Next stop on the trip is to the famous Bixby Bridge, which is oft used in auto commercials showing off the iconic bridge and the handling of some unnamed sports sports car. The Bixby Bridge is particularly enormous considering the chasm it has to span, and that coupled with the frequent landslides this region has become known for, make it an even greater feat that it was constructed so long ago in 1932. Its stands as a testament to modern engineering and has been relatively unmolested in its over 80 years. The arching span is equally beautiful from the east as it is from the west, and there are a few trails leading down to lower vantage points on both sides of the bridge. Jean and Scott help the group to see the many ways in which to construct their own images of this beauty, from isolating its roadway against the backdrop of the Big Sur hills, to including the roadway and curvy highway one to the south, and also to use a more wide approach and fit in the coast as well. There are too many vantage points to capture all of them in day so its off to McWay Falls and the longest drive on todays workshop. 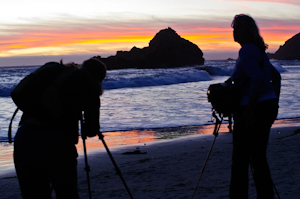 24 miles from the Bixby Bridge lies a little cove that hides a really cool secret from passersby on highway one. McWay Falls is an 80 foot plunge waterfall that is fed by McWay Creek and is only one of two tide falls (waterfalls that flow directly into the ocean) in nearly 300 miles of coastline, the other being Alamere Falls in Point Reyes National Seashore over 200 miles away to the north. McWay Falls fed onto a perfect little sandy beach almost entirely enclosed in a little cove, making landscape photography here a definite must. Scott and Jean help the group to find the optimal position on the rim walkway, and help them to understand about filters, namely neutral density filters, to slow down the action of the tide and create a more ethereal looking photo with respect to the water. With sunset approaching and some miles yet to travel, we packed everyone up in the van again and made our way to the final spot of the evening. 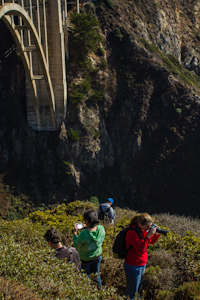 Pfeiffer Beach is almost an unknown beach to anyone but photographers and locals. From the Cabrillo highway, there is no sign leading down to its shores, and worse yet, the road isn't marked by anything that would let any passerby believe there was more than private residences down it. In any case, its narrow one lane bumpy road with pullouts is a short (or long if you're in the backseat) 2 mile ride to the day use area at the bottom. From there its just a short walk to the majesty of what has become known as "The Hole in the Rock." Once you lay eyes on this monstrous rock, you'll understand the nickname. And every year around late December starts an awesome phenomenon that attracts photographers the world over: during sunset, the sun passes down perfectly through the hole in the rock illuminating the rocks in the surf and bathing everything in a posh golden light. Today Jean and Scott explained how to capture this phenomenon even though its nearly 2 months premature. The tide and weather were perfect, allowing just enough light through the hole to keep our group busy well after sunset. And after the long and dark drive back to the crossroads, it was finally time to end what was truly a majestic day. See you next time!

Scott, Jean and the rest of the Aperture Academy team