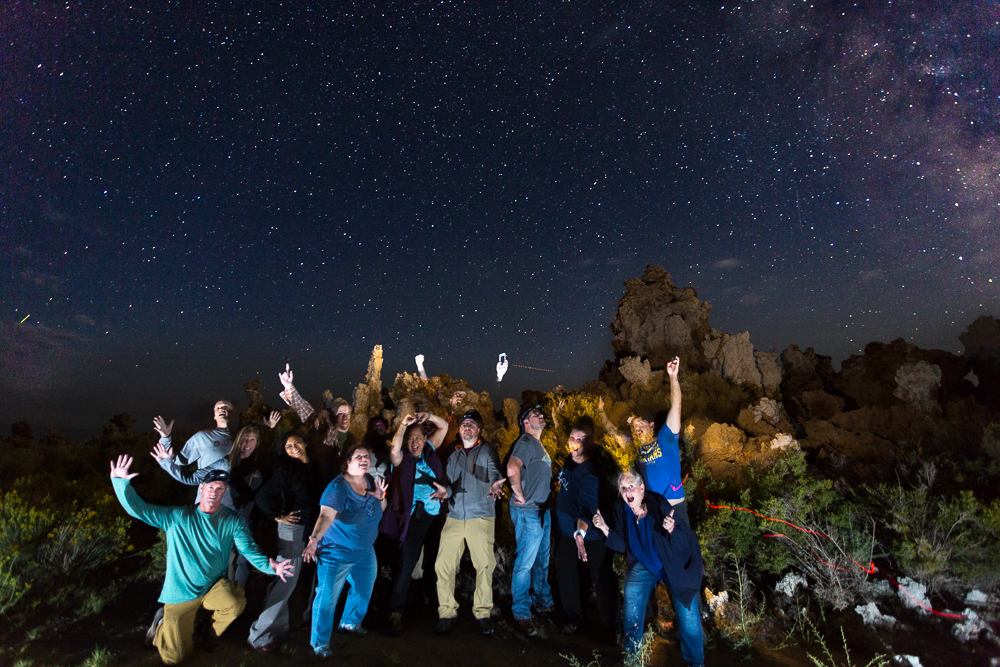 If you've ever watched an old western, I'm sure you have spent at least some time wondering what it must have been like to live during that era. Lucky for us, a few spots in the world can still provide us with a small glimpse into life in the old west. One of the best-preserved ghost towns in the world is Bodie. Built on the back of a mining boom this town grew to well over 10,000 residents in the early parts of the 19th century. Eventually the mine dried up, and combined with a devastating fire the townsfolk up and left…taking virtually nothing with them. What is left is a beautifully preserved old west town. Visiting Bodie during the day with the crowds of tourists can make it hard to get the feeling of what it must have been like to live here back in the day…but at night, it's a whole new ball game.

Our group of 12 eager photographers met us Friday afternoon for a weekend of night shooting in Bodie and Mono Lake. After our orientation, we gave the group a bit of time to go buy some snacks, or grab a meal before we set off for the park.

Having Bodie all to ourselves from sunset until midnight is AWESOME. It gives us the freedom to really FEEL the place out, and get lost in the solitude and quiet. Scott and I gave the group some time to explore at sunset, and grab some images. We helped point folks in the right direction, and give them some feedback on their images. This time of year is great on the eastern slop of the Sierra; sunsets often are filled with lovely monsoon clouds that change a variety of different colors with the setting sun. When the sun sets, the clouds magically blow away and give way to a clear star filled sky to photograph. 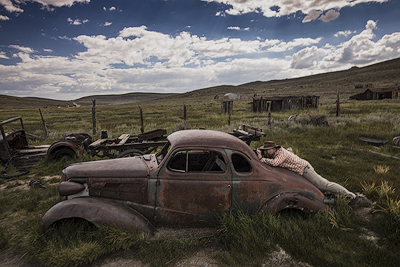 Once the dark descended on the ghost town it was time to get to it. Scott and I started the class out with some pinpoint stars. This the least time consuming night images…each exposure is only about 20 seconds long. It gives us time to deal with any technical difficulties on the student cameras, and get our light painting times and techniques fine-tuned. We used a variety of colors, and a mix of flashlights and hand held flashes to light up the old church. It was a lot of fun. Once everyone had several images of the church with the lovely sky filled with pinpoint stars it was time to start our long star trail shots. We set the intervolmeters up to take a series of 5 minute exposures with a second in between…then go have a seat in our little room. A few students had some technical difficulties with their remotes, so they had to monitor their cameras to make sure they behaved. Eventually, however, everyone got enough star trail shots that we could process them later in the workshop.

Once the star trail was done Scott and I broke the group up into 2 smaller factions and had them shoot some pinpoint stars over various parts of the ghost town. We also played with some colored gels, and had fun seeing how the different colors played out in our ghostly scenes. 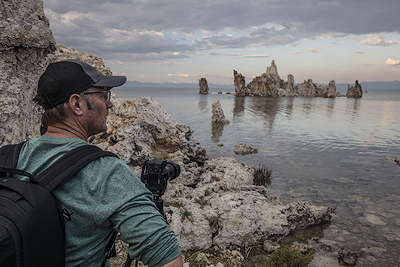 Midnight comes quick, before we knew it we were on our way back to the hotel with memory cards full of night fun.

Our next day began at noon. We were headed back to Bodie. Puffy white clouds dotted the sky, and we were all excited to get back and really explore the park and work on creating some magical monochromatic imagery. The park was fairly crowded, but we all found little nooks and crannies to photograph…we had a few folks work on some long exposures with solid ND filters, others really go lost and wandered from top to bottom of the park looking for their own special spots.

That night we were headed to Mono Lake…from a man made wonder to a natural wonder. We lucked out and had a really nice sunset again! Light rays beamed up from behind the Sierra range, and gave everyone some really nice images. Scott and I helped point people to the best comps, and made sure they were all grabbing some of the wonderful light. Once the sun was gone…90% of the people in the area packed up and left. We stayed to photograph some pinpoint stars over a couple of different scenes. We again worked on the settings, different types of light painting (using the colored gels) and various powered flashlights. It was a lot of fun. Unfortunately, we don't have Mono Lake all to ourselves…a few other folks were out doing night shooting as well…which means the areas we can photograph are a little limited as to not negatively affect the work of others enjoying this area as well. Around 11pm we packed up to head back to the hotel…the next morning we were on to get our processing technique learned. 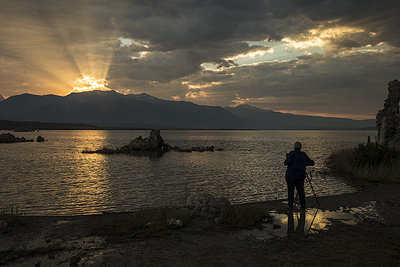 We set up at the Whoa Nellie Deli…a local institution. They had a lovely lawn and outdoor area we made into a makeshift classroom. Scott helped get everyone dialed in on the ways to process the star trails, and how to make them look the best they can. Once folks had processed the star trails, we both helped answer individual needs on tips and tricks to remove plane trails, fix lens distortion, and other little ways to help improve an image. There were so many nice images on the classes machines…it was fun to see all the different ways folks view a scene. Eventually the laptop batteries were dying and that was a hint that it was time to wrap it up.

The time really flew by quickly, and we all had a great weekend of exploring the wild west after dark.