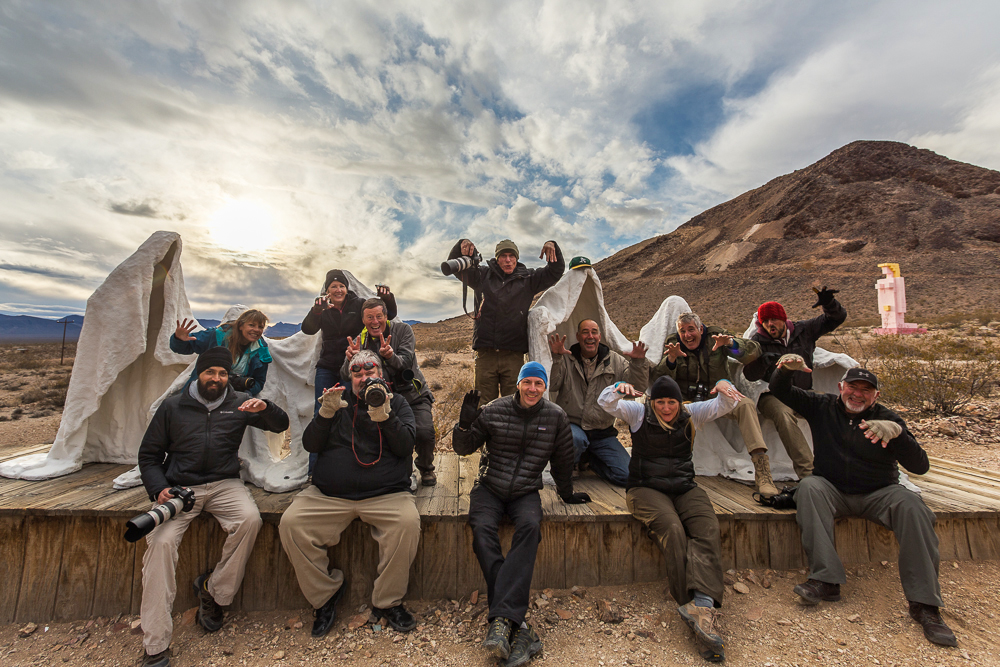 Starting at Zabriskie Point, sunrise on our first day was a little lackluster, especially after most of the group saw what happened the day before with the rain (which is a RARE sight). We were able to get some nice alpen glow from the sunrise and have some really sweet pinks show up on the Panamint Range just beyond Manly Beacon. The previous nights snowfall in the highlands helped accentuate the pink colors when the sun finally rose behind us. I have to give it to our group for braving the cold weather and wind sheer as it was pretty cold, seeing as we were in the desert. We made our way down into the wash as the sun rose to take advantage of the nice shadows on the erosion patterns at the point.

Our next stop was the Cottonball Marsh, which is a large expanse of flat mud and salt encrusted playa, just north of Furnace Creek. The Marsh is an awesome place for photography, as the water from rainfall and underground springs, keep the whole area moist and as water evaporates in the playa, very weird things start to happen in the mud and salt. The formations are endless and its literally a playground of endless compositions, which Jean and I were happy to traverse and show our group. But as the sun rose ever higher, it was time to go back the resort and take a nap and get some food. 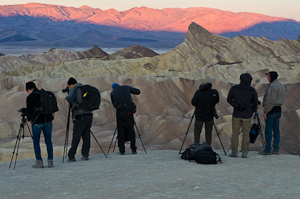 After break, we headed south and drove through Artists Drive, which is a one way loop that took us closer to the eroded hillside of the Amargosa Mountains. The area got its name from the deposits of various minerals, which over time have been exposed and then oxidized by the air. The different minerals turn colors when exposed and the whole area is full of pink, purple, green, and red. Its concentrated to one specific area known as Artists Palette, which is definitely the highlight of the drive.

For sunset we made our way further south to Badwater Basin, who's maze of salt polygons seem to go on as far as the eye can see. The is one of the few places on earth where this phenomenon happens. The water evaporates and the salt expands, creating these extremely photogenic hexagonal saucers. The only thing left was for Jean and I to create some clouds, which, sadly we weren't up for, so we had to settle for a hint of yellow glow far off in the distance due to the plain blue skies overhead. As the light faded, we headed back to the resort for some much needed food and sleep, and some praying to the weather gods. 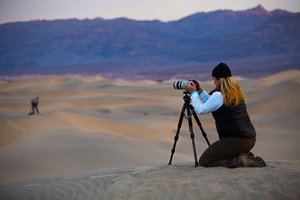 We began a little earlier today as we had a longer drive up to the Mesquite Sand Dunes. We took the group out to a spot a little further than the tourists go, which is great to reduce the chances of seeing others footprints embedded in the pristine sand. I guess all the praying worked, as walking out to the dunes this morning we were treated with another absolutely stunning sunrise. The clouds overhead were illuminated in all directions with a brilliant array of colors, just as it had the week before. We spent the next hour walking the dunes and finding interesting compositions with the swirling lines of the spines of the dunes. The sun did come out finally, and provided us with some nice shadows on the western sides of the dunes.

Next was Mosaic Canyon, which is a nice little slot canyon with walls of carved marble and breccia (gravel) which give the canyon walls a mosaic looking effect, with all the different layers. The smooth marble is especially nice and has different colored layers of its own. We took the group up to the slot canyon, and up to an outcrop providing an overlook of entire thing. The partly cloudy skies made the light inside and on top especially nice to work with. But we had a long day left, so it was time for a break. 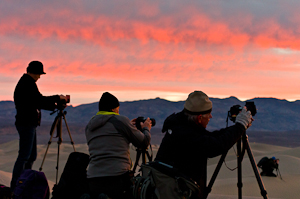 After a short break, we made our way to Beatty, NV, where we took refuge from the cold weather, and our empty stomachs, inside KC's Outpost, a quaint little eatery which boasts homemade everything. The food and people are always a treat, and so are the cakes! With food coma about to set in, we made our way to the little ghost town of Rhyolite. Started in 1905, Rhyolite was a gold mining town which made it claim from the nearby Bullfrog Hills Mine. Sadly by 1920, the entire place was deserted due the overvalue of the mine, and its operation running at a loss. Most of the buildings have been destroyed, but the ones that are still standing evoke that classical feeling of a ghost town and surrounding wilderness provides a nice backdrop. Another pretty cool feature next to the old town is the Goldwell open air museum, which is a collection of sculptures done by various artists years ago. The most famous and recognizable is the recreation of the last supper with ghost like figures. Jean and I had the class take our customary group shot here amongst the ghosts.

With almost no time left to spare, we hurried back to an arm of the Badwater Basin, just in time to see the sky above Panamint Range glow pink from the setting sun. Again, the weather gods were in our favor, as having an epic sunrise and sunset on the same day is very rare indeed! Once we arrived, there was a clamber of activity as our students raced out onto the salt pan, eager to capture the amazing light on the peaks above. If only fleeting, if was magnificent, and all of us were trying collectively to eek out more from the sunset colors. After a time, we retreated the darkening skies and made our way back to Furnace Creek. What an awesome couple of days!

Many thanks to all of our participants, you guys make this the most fun! And until next time…

Scott, Jean and the rest of the Aperture Academy Team!