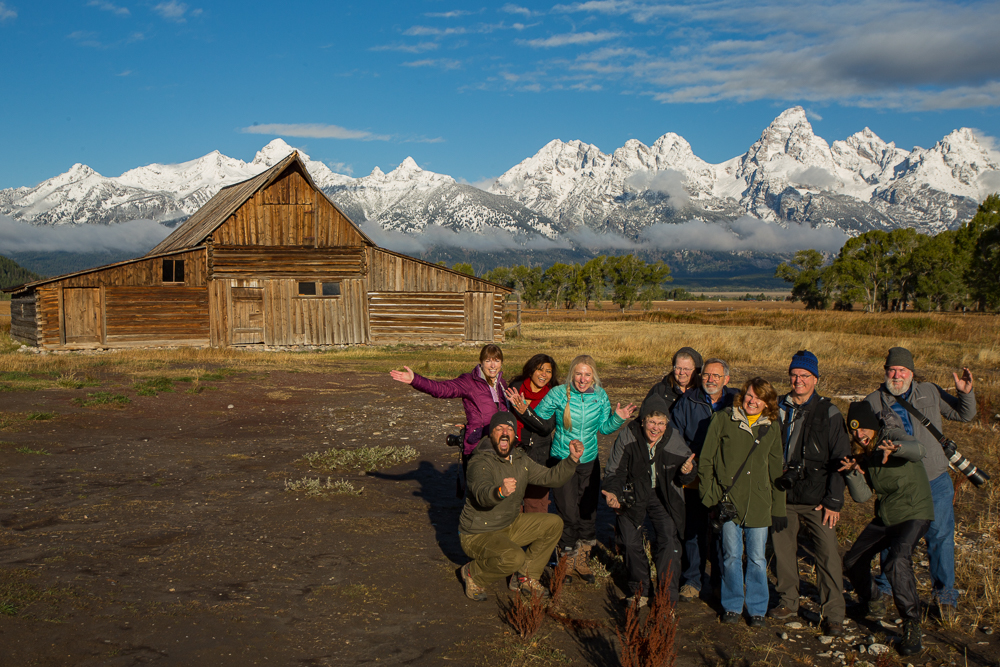 One my most favorite places to visit in the fall, is Wyoming. The air starts to turn crisp with the onset of winter, the foliage begins to turn orange, snow is always a possibility, and the Teton Mountain Range, my god, is so beautiful. Grand Teton National Park is definitely my favorite in the NPS system. The way those jagged peaks are ever present from any one of a hundred vantage points for miles around, is truly awe inspiring. Makes for some awesome photos too! As a bonus, there's plenty of wildlife to be seen in the park boundary as well. Moose, elk, brown and black bear, eagles, and osprey, all call the Teton range home. Its amazing that we can come to enjoy this wild frontier of the American West.

Every year Aperture Academy leads a group of ten photographers in Grand Teton National Park, keeping an every present eye for wildlife, and hitting the landscapes when the weather is advantageous. This year I was joined once again by my colleague and fellow professional photographer, Mike Wardynski. We had a ball leading this workshop together last year, and its a tough act to follow, but we always have faith, and never give the weather reports credence. We met our group at the Lexington Hotel in Jackson on a cold rainy night, where the mood of the group seemed a little dejected about the weather report. Never wanting to tempt fate, I cautioned about putting too much faith in weathermen, but was not overly optimistic either. 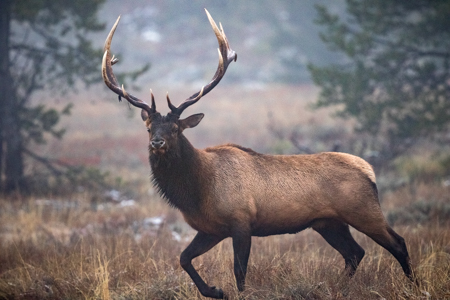 The snow that Mike and I had hoped for, never materialized from the rain. The weather looked a bit off for the first day, so we decided to go huntin fer critters instead. When the bulk of the elk heard passed us by in the darkness, we took a less traveled road to an open meadow, and on the way found a herd of pronghorn antelope with two calfs. It was a bit challenging with the thick fog but we managed to get some shots off before they retreated into the white. In the meadow we found a beautiful six pointed elk grazing in the foggy open space. We quietly exited the van and then tallied off a couple hundred shots as he passed by. Great opening for the day. But it wasn't long before we got word that a grizzly was seen in willow flats. While we waited patiently for it to emerge from the bushes, we struck gold, as we were in very good position to grab some shots before he went out of range. We stopped on the way back and shot some trail horses near the road at elk flats before calling it a morning.

After our lunch break, the park had quieted down significantly. A moose cow and her calf were rustling in the tree undergrowth near Moose, but there wasnt any good angles to pursue further without seriously invading their space. So we trudged on, not finding much, so right before sunset we took the group out to Schwabachers Landing, where there is seriously fantastic view of the mountains with the snake river right in front. Well the river was there, nice and glassy, but the mountains disappeared under thick clouds, it seemed, right when we got there! After trying to photograph some mountain bluebirds, the light was failing and it was time to call it quits. 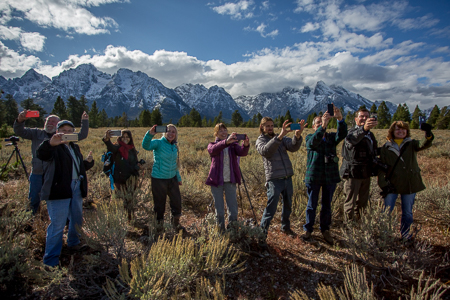 A much more fortunate morning! After driving all the way to Oxbow Bend, an extremely thick layer of fog was present that Mike and I didn't think was going to clear for sunrise, so without even getting out of the van, we hurried back to the Moulton Barn, where thankfully the skies were clearer. As we were the first group to arrive, we had prime position to witness a pretty decent sunrise with some color in the sky and eventually on the Teton Range.. So much for the forecast! The skies cleared up enough after that we had sun in our faces once it cleared the mountains to our backs. We spent the next hour photographing the two barns until we caught up with a couple rogue Moose along the Gros Ventre river. Two for two! After a quick break at a local coffee shop, we drove a popular scenic road back into town for our mid-morning break.

In the afternoon, we ran back through that same road but to no avail! The skies were starting to look really interesting at this point so we made a stop an overlook and grabbed some photos of the range, and some panoramas for good measure. Then we headed up to signal mountain for some more overlook fun. When we came down, we spotted a big bull moose right out in the open area at willow flats! Our group eagerly wanted to grab some pics, but Mike and I had a hunch he was going to cross the river, so we had everyone quickly get back into the vehicle so we could get into another position by the river and wait for him to cross. The hunch was correct, and we got situated down by the river with only a moment to spare before the bull crossed the river right in front of us!. And if that wasnt enough excitement, the sunset overlooking willow flats was spectacularly lit with pinks and reds and purples! Once again the weather forecast had been wrong, and we'ed scored huge! 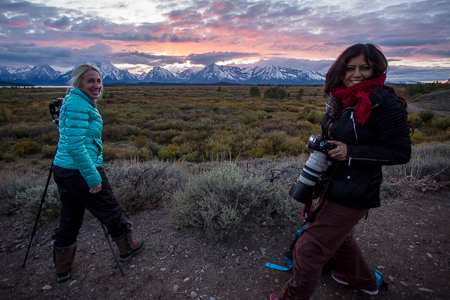 We decided to try Oxbow Bend again for the last sunrise of the workshop. We once again had clear enough skies to see the sun and we got some glow on horizon behind the mountains just before first light. After that we drove back to the Jackson Dam area hoping to run into that wandering grizzly or another moose, but what we found instead was a golden eagle! Perched on a leafless tree resting in the morning sun, there sat what looked to be a juvenile golden eagle. He let us work the scene and get pretty close, but everyone was respectful of the space and we shot him for well over 30 minutes; he was as calm as a cucumber. From there we got word that there were bears spotted up Pacific Creek, so gathered everyone and headed down the long road, but to no avail. So we spent some time shooting the fall foliage until we decided to wrap it up for the morning.

In the afternoon we headed once again down the Moose-Wilson road (this made it four times) and finally, finally we got lucky! Two bear sightings in less than 50 feet kept our group busy for the better part of an hour. We waited patiently as this black bear climbed a hawthorn bush and peaked out every once in while to grab some berries. Fourth time's a charm! The sky did begin to darken a bit after that, hinting at rain, which still hadnt come. So prodded on back to Two Ocean Lake and on the way we spotted another grizzly bear in an open field! We waited there and watched him for about a half hour as he wandered through the open field looking for food. As the light began to fade and the bear moved further out of the reach of our lenses, we decided to head back to Jackson with some awesome images from the previous three days! As luck would have it, when we turned onto the main road, it started to rain. Mike and I laughed and as we headed back into Jackson we thanked everyone for keeping their trust in us high, and for keeping their faith in the weather forecast low. But the rain at the end seemed like a fitting close to amazing adventure!

Until our next big adventure,