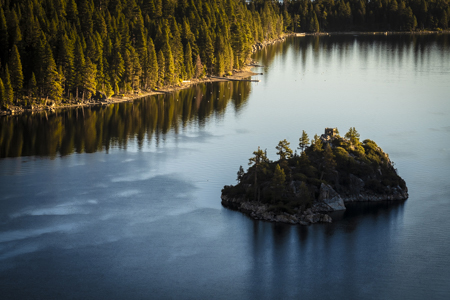 Tahoe is one of the prettier lakes in California. Lake Tahoe is also one of the prettiest lakes in Nevada. Photographically it’s a great place to explore as well. It’s been several years but I was happy to have this workshop back on the docket and lead a group of awesome photographers on a 2-day adventure.

We met Friday in South Shore for a brief orientation on what to expect for the weekend before getting a good night's sleep. The following morning we began our time at Emerald Bay. This is probably one of the more iconic views of the lake. Fannette Island sits in the middle of a small bay that sits off the main portion of the lake. The water in this part of the lake is typically calmer so you get a different look when photographing the lake.

We set up and began to shoot as the sun rose. While there were no clouds to be found, the subtle shapes and shadows of the lake are still amazing to photograph. I encouraged the group to shoot wide, and do more close-up shots of the island…as the light from the rising sun began to hit the treeline contrast everyone got some really nice images of the change in light and shadow. 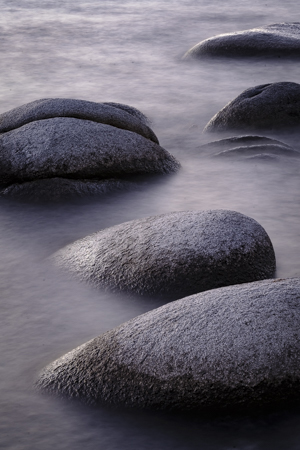 After the sun had risen we moved to Eagle Falls which was more like Eagle Trickle, but there were a couple of areas with pools and flowing water we utilized for foreground elements. In the spring this is a raging multi-tiered waterfall with a lovely vista of the lake and Fannette Island, but even without the roaring waterfall, it’s still a beautiful vista. The main reason to stop here though as it is also the trailhead for Eagle Lake which is arguably one of the best alpine lakes in the area with only minimal hiking. With only a mile in, it’s really accessible to everyone, so the parking lot fills early. Even though it’s only a mile, the hike isn’t all that easy, as it climbs about 1000 feet in that time, but the end is worth it! Glorious granite peaks are reflected in a deep blue lake. That’s hard to beat!

We stayed up at the lake using the rocky shoreline as the foreground and capturing all kinds of awesome reflections. Luckily the hike out isn’t quite as bad, and everyone returned with several nice images.

That night we went to Bonsai Rock, a sweet little beach on the eastern side of the lake. The granite boulders on the eastern shore of the lake are so cool. They’ve been sculpted by wind, water, and time to be smooth, and they make for great foregrounds or subjects by themselves. The wind on the lake tends to pick up as the sun sets, but for a while, we had some pockets of calm water to work with. This is a popular beach, so it’s not uncommon to have other photographers there as well. This particular evening we shared it with a swimsuit model shoot. After sunset, the group was up for a little night shooting so we stuck around to grab some shots of the stars over this small bay. The moon made it a little tough to get too many stars, but it was really pretty nonetheless. Staying after dark also adds to the adventure of getting out of the area once it’s time to leave. We all made it back up with only a few wrong turns…but even that was fun!

The next morning we started at Skylandia Park, which sounds like a kid's video game, but is actually a nice public park with a cool pier. If you see a photo of a pier in the Tahoe area at sunrise or sunset, it’s most likely Skylandia Pier. Going in the morning almost assures you’ll have it to yourself, and won’t be fighting with a portrait photographer and a bride and groom to get the goods. We shot from on top of the pier, under the pier, and to the side. This pier is cool from all angles! 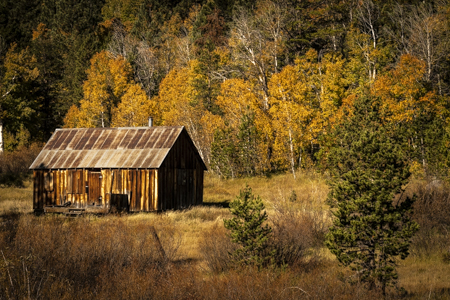 After the pier, we set off for Hope Valley to check on the fall color, and go to the Red Lake vista Point where we get a great view of the whole valley. The fall color was a little early yet, but we found a cool old barn with some nice patches of yellow aspen behind it. Some of the better groves of aspens were too harsh in terms of light, so we opted to return later in the afternoon.

The middle part of our day was spent resting and processing. Most people opted for more rest and less processing, but that’s ok. The photos I did see were awesome! Everyone had several keepers for sure.

The afternoon we returned to Hope Valley for some aspen groves, and then finished up at Sand Harbor. Sand Harbor is like a larger version of Bonsai Rock. More granite boulders, and bigger boulders. The granite holds evening light really well, much the way Yosemite Valley does. It’s fun to shoot these areas well after the sun has set because the glow on the rocks is still visible. Once the sun has really gone, it’s time to use long exposures to blur out the water. The smooth round boulders and silky-smooth water make for awesome abstract images. Again, I saw a lot of nice work on the cameras.

All good things must come to an end, and before long it was too dark to see, and time to call it a day.

Thanks to a fun group of adventurous photographers!