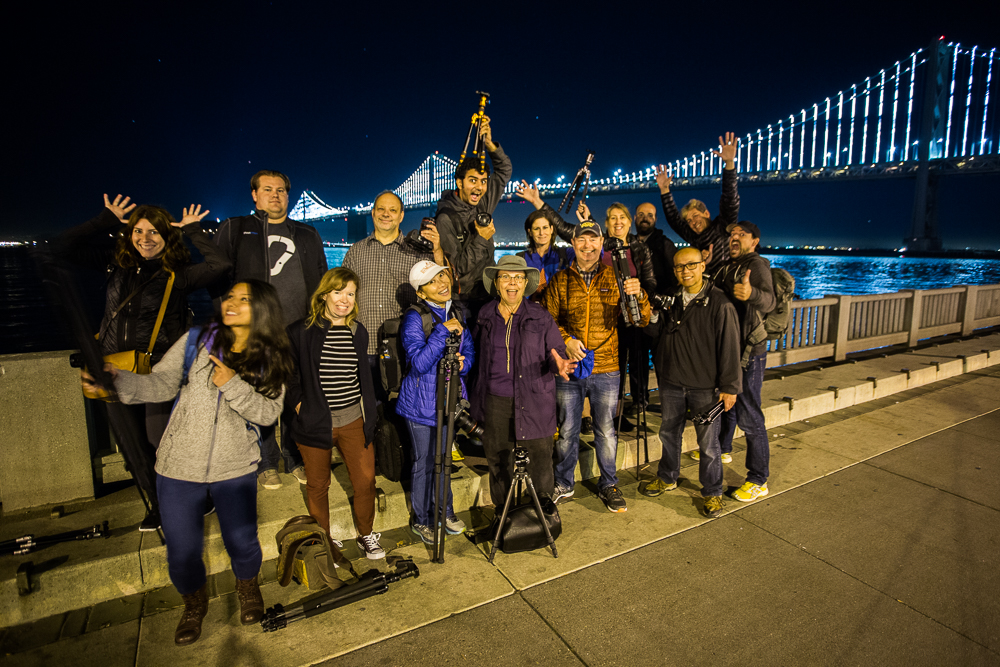 San Francisco is one of the most photogenic cities I have ever had the pleasure of visiting. There are so many places in the city to enjoy; from the bustling of businesses around downtown and the wharf, to the serenity of western cliffs overlooking the ocean, and everything in between. There is a multitude of adventure to be had in all corners of the city. Where most tourists come and visit San Francisco during the day, the city is equally as beautiful at night, when the city lights up from every direction. This is the time of the Night Owls, our most popular workshop.

At out meet up place in Sausalito, fellow instructor Joe Azure and I host an orientation in the confines of a calm parking lot. We go over what to expect on the workshop, the itinerary for the evening, and most importantly, an introduction to every individual student, and what specifically they would like to learn/glean from taking the workshop. After that, we pack everyone in and head out to shoot! 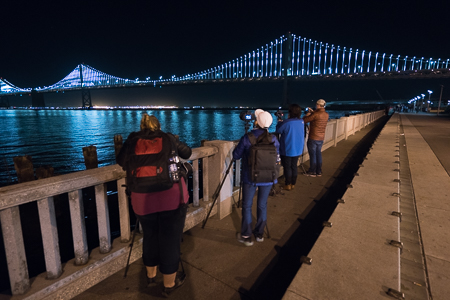 Fall is consistently a fabulous time to visit San Francisco. The weather is a bit more mild and predictable, and the fog is less of a buzzkill. We arrived at our first stop at the Palace of Fine Arts shortly after sunset. This first stop is essential in allowing everyone in the group to warm up and get more comfortable with their cameras and settings. The light here is best just after sunset, when the sky is still blue enough and light enough that the Palace lights and the natural blue hour glow, are relatively the same intensity. We use this time to help everyone settle in to their cameras and tripods, and as the light slowly begins to fade and the scene gets darker, our group slowly eases into to shooting at night. Once the sky turns black, the lights from the Palace easily overpower the rest of the scene and its gets harder to balance the exposure. So after about an hour or so, its time to move on and go to our next spot.

After a short break to grab some evening snacks, we drive up to the top of Lombard street, for our next spot. Lombard street is famous for its many switchbacks, often earning the name; "crookedest street in America." This plays well into the photo minded night owl, because the switchbacks allow us to shoot either down the street, or up it, and use the lights of the cars as streaking whimsical illuminated beams, dancing down the curves. We split the group in two, and had half come down the street with me, and the other stay near the top with Joe. For over an hour, every car (read:tourist) that drove down the street was another opportunity to have these amazing light streaks appear magically in the photo. After a while, our groups switch, so everyone gets a chance to see the effect of shooting up or down the street. Its a pretty simple exercise but one thats always sure to amaze, because we can't physically see the results of our experiment without a camera and a long exposure. After everyone got their fill, we headed further into the city. 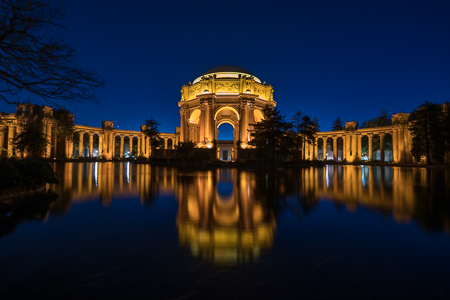 Our next stop took us to the waterfront, along the Embarcadero. The Bay Bridge is often overshadowed by its more popular cousin, The Golden Gate. But at night they are equally beautiful and awe inspiring. Along the Embarcadero there is a perfect vantage point of the Bay Bridge with some old pier pilings that one can use as a foreground. Its become a classic San Francisco photo. And since the introduction of the LED light show on the bridges' road cables, the scene is now even more dramatic. We took a quick group shot with bridge, and then Joe and I helped everyone settle into a composition using the aforementioned pilings and the bridge itself as the hero. Carefully tuning the white balance for this scene provides even more opportunities for a unique shot. Once everyone was setup and got some shots, Joe and I persuaded our group to try some different angles by moving up and down the waterfront to get a different foreground. As the time still allowed, we hurried everyone back into the van for one last stop.

The final stop of the evening was an overlook on the cliffs in the Marin Headlands. Our subject was the very visible Golden Gate Bridge. No fog meant a great opportunity to make one last quick stop and take some shots of our most popular state landmark. The views from cliffs on the Marin side are second to none. Especially at night. The bridge is perfectly framed with the city lights right behind it. The whole scene just screams San Francisco beauty. Sadly though, our time no the workshop was ending. Once everyone got some killer shots of the bridge, we had to pack it in and head down the hill. Heres to a great night out in the city!

Until next time, Scott, Joe and the rest of the Aperture Academy Team