September marks the beginning of the football season, but at the Aperture Academy we have our own version of ‘Friday Night Lights,’ it’s our very popular ‘Night Owls’ photography course. A group of 12 enthusiastic photographers met Scott Donschikowski and me in Sausalito for a brief orientation, followed by a night of fun photography throughout SF.

Our first stop was the Palace of Fine Arts…this is a lovely piece of architecture, and one that never disappoints in terms of providing beautiful photographic opportunities. Scott and I had the class spread out along the reflection pool and we provided them with instruction on the basics of evening photography, as it related to the scene at hand, and the eventual fade to blue hour, and darkness. That transition period between sunset and darkness is a fantastically beautiful time to photograph, but the light changes a great deal during that time…so we wanted to make sure the class really got some nice images during that window.

Our next stop was Lombard Street…for many this is the location where they really get their night images to start popping. We split the group up so one half can shoot taillights streaking down the street, and the other can shoot headlights. Scott and I each have the group doing slightly different takes on night photography, so that the group can learn that there’s often more than one way to achieve a desired result. For me, it’s always fun to watch the groups get excited as they see their images pop up on the screen and the streaks of light from the passing cars give their images added interest. 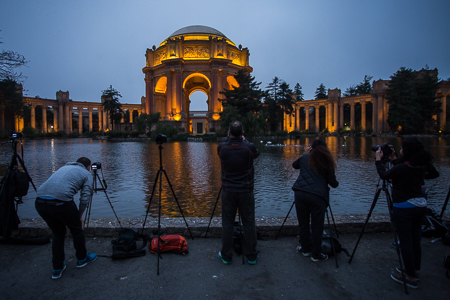 Our next stop is the Embarcadero…home to the night ninja, or whatever that creepy cloaked person that jumped up on the cement bench was. We always see something bizarre on this bustling SF street at night…tonight was no different. Night ninja aside, the photography from this location is the whole reason we come. Old pier pilings, and a beautifully lit bridge make for some great photographs. By this point in the evening the class is starting to really ‘get it’ and they only need mild reminders on settings, and little tweaks on their compositions. It’s been a full evening, with lots of images taken…but we still have to give the Golden Gate Bridge a go.

Fort Baker is the best chance of getting the bridge towers to show up when Karl the fog shows up…which he does, often, during the summer and early fall. Fort Baker offers a vantage point to the east of the bridge, which often shows the north tower as the fog begins to break. Tonight the tower was very well hidden, but the glow from the lights in the fog gave the whole area a really nice aesthetic…and the parts of the bridge that were visible gave added iconic context to the images…it was a lot of fun.

All good things must come to an end, and as the clock passed midnight it was time to get our group back to their vehicles so they could make their way home to sift through all their night images and begin to wonder…”how do I process these things anyway?”