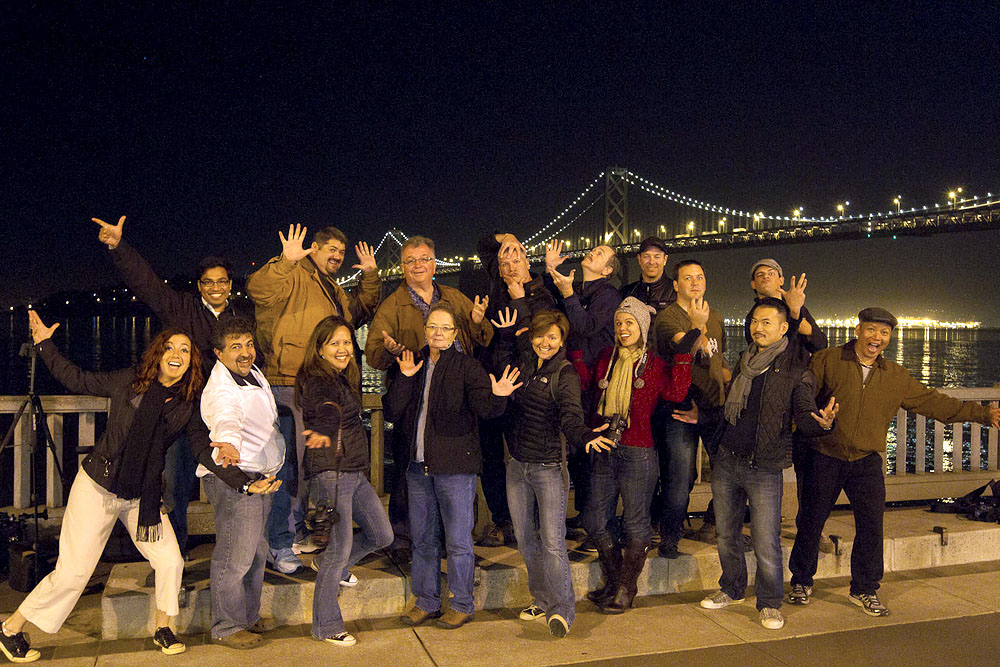 San Francisco, the jewel of the Golden Coast, gateway to the Pacific, and one of the most popular and iconic photographic destinations in the world. They come from all over to enjoy the architecture of the downtown skyline, the massive, hulking bridges that connect our cities, the food, the parks, etc. San Francisco is photographers delight. But happens when the lights go down? The city has an even more amazing skyline during the night and that’s why the Aperture Academy sent instructors Ellie Stone and Scott Donschikowski out to lead a group of budding photogs into the night and the lights of the city.

Starting out at Baker Beach, the group met up and we did our usual introductions and tried to get a feel for the individual needs of the group at hand. Anything specific they wanted to work on such as composition, HDRs, knowing the locations, etc. would all be addressed to tailor the workshop to their needs. After our round of introductions, we led the party out the end of Baker and had everyone “warm up” by setting up their cameras and taking some shots of the Golden Gate Bridge bathed in the setting sunlight. Ellie and Scott moved around getting to know the participants for the evening and doled out advice for comps and also how to magically erase people from the shot using some techniques in Photoshop (the beach was packed!) 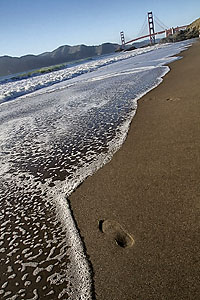 After the long walk back to the van, we headed to our second spot of the evening: The Palace of Fine Arts, where there are a multitude of vantage points for that perfect composition. The idea at the Palace is for us to arrive just after the sun sets. There’s a point in time after the sun sets and before it gets completely dark called “blue hour.” The Palace is colored in almost an orange hue, set that nice warm light against a cool even blue sky, and you have perfection. “Blue hour” isn’t nearly an hour long as it is blue, so Ellie and Scott had the group spread out and find their positions to await this crucial time before the blue in sky is replaced with the black of night. After this time, we packed up the gear and walked underneath the rotunda area of the Palace to practice some more abstract photo ideas. The columns, buttresses, arches, and grand dome of the Palace provide for some amazing architectural shots as well as abstracts. As Scott explains, “it’s pretty easy to get a great shot here, just literally point your camera up and shoot! You’ll be amazed with the results.” The fun here can’t last forever though, and we round the group up and took off to enjoy a little modest break to refresh everyone and talk about the places to come. 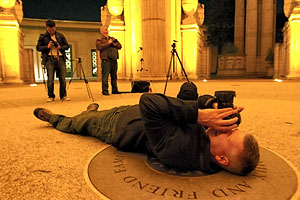 Just at the top of Lombard Street (and Hyde) begins one of the most popular and most talked about streets in the country. As it drops down the hill, Lombard abruptly shifts from left to right and back again down the hill at a pretty extreme angle. It’s a fun ride and an amazing place to shoot. But at night, most people don’t realize that car lights can provide an awesome ethereal subject for the static shots of the cascading street. Ellie and Scott split the group in two and half stay high, the rest go low. From each vantage point is a little different taste of the shot at hand. From up high, the group can see the majestic slalom of taillights weave its way down the street. And from the bottom they can get this mysterious beam of light entering and exiting their frame with a whimsical curvature. It’s a truly awesome spectacle that can only be seen after a long exposure in the night. As multitudes of cars passed through in our time there, our groups got some amazing shots from both vantage points. But we had one more place to hit before sleep. 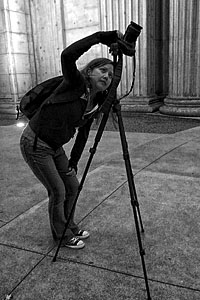 Along the Embarcadero there are hundreds upon hundreds of piers. Most are not in use today and are under the water, never to be seen again. But remnants of some of those old piers are still there, if only for a limited time despite rumor. Alongside the Bay Bridge, there is one such spot which provides a perfect foreground for our students, set in front of the Bay Bridge basked in the light from across the water. It’s an amazing place. Ellie and Scott hop around to discuss everyone’s compositions, and describe what changing the white balance can do to improve the look of the shot. Auto White Balance is notorious for being to “warm” at night, and at this particular spot, that rule holds true. When we help to switch the balance to a cooler setting, lightbulbs and looks of amazement appear. That’s payment enough for us. A quick group shot where the newly befriended group members make funny faces at our camera, and we have got all we wanted out of the evening. It was fun guys! Thanks for the good ride!

Until next time,
Scott, Ellie and the rest of the Aperture Academy team