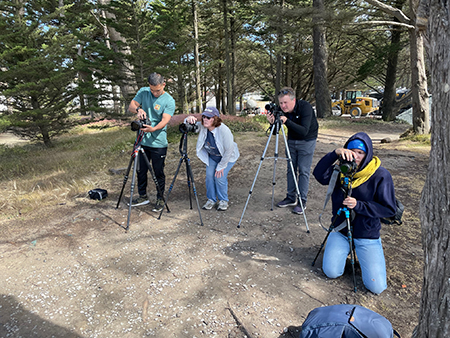 It was unseasonably warm for the start of our San Francisco Marin Headlands workshop with temperatures in the 80s in the Bay Area. The weather was still perfect though. Sunny, breezy, a little bit of fog and tine clouds. All signs pointed to another outstanding workshop!

Our group met at Battery Godfrey on the San Francisco side of the Golden Gate bridge. When everybody was gathered, we talked about the adventure we were going to have today. We introduced ourselves and went over our planned itinerary which included photographing the majestic bridge, an old fort, and the Pacific Ocean.

With the introductory pieces covered, we began our workshop. Battery Godfrey offers impressive vantage points of the Pacific Ocean and the Golden Gate Bridge. It is well known for several large cypress trees that frame the Golden Gate Bridge at certain angles. We moved around the battery a bit, shooting from a few different perspectives. We also discussed the use of filters and the benefits they can have when shooting in bright conditions. With dark filters, it is possible to shoot long exposures even in very bright areas.

After our group captured many images, we loaded up and headed to the nearby Fort Point. Fort Point offers awesome anchor chains as foreground elements. They are rusty, pitted, and full of character. They made great subjects by themselves or to accompany the majestic Golden Gate. We walked along the seawall shooting the sights, including witnessing the sun setting through the girders of the bridge. The sun rays blasting through the bridge were impressive and captured everyone’s attention!

As we were trying to ensure we got to a number of great locations, it was time to move on again. This time, it was due north into Marin County to the Sausalito side of the Golden Gate Bridge. Though still bright, the sun was just beginning to fade which allowed for beautiful light while at the same time allowing us to work on slightly longer exposures. This included practice with various filters. There were some great things to watch as well with large sailboats, wildlife, and large tankers. 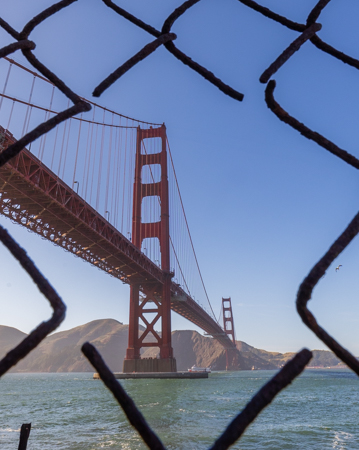 Our next stop was Rodeo Beach in the Marin Headlands. This beautiful beach is always fun because the weather is different every time. Today was no different. Incoming tide and large waves prevented us from getting to our desired location of the sea stacks, but there are still lots of other beautiful things here to photograph, so that's just what we did! We discussed longer exposures to create a motion blur effect in the water as we watched the sun slowly sink towards the ocean. Directly opposite the sunset, at the same time, we were treated to a very bright full moon rise. Despite not being able to get an amazing sunset shot for the lack of clouds, it was a great experience to shoot both the sun and the moon. We also watched large waves crashing near shore as they were backlit by the setting sun.

As the blue hour was now upon us, we trekked back across the beach to our cars and headed to our final stop for the night. Back up high in the Marin Headlands, we found a fairly secluded spot to shoot the Golden Gate Bridge with a great view of the San Francisco skyline and the Bay Bridge. As the skies were darkening, we were able to practice with long exposure techniques. This allowed us to capture light trails from cars driving on the bridge and allowed us to capture the light trails from vehicles leaving the Marin Headlands. We worked on numerous compositions and talked about various camera settings and techniques. Everyone got great and creative images.

After what felt like the blink of an eye, the workshop was over. We packed our gear and headed back to our cars. After a brief round of final goodbyes, everyone was off to find somewhere to rest up after a long day of shooting. I am confident everyone created memorable photos for themselves, which is always the goal!

Looking forward to seeing everyone again in future workshops.