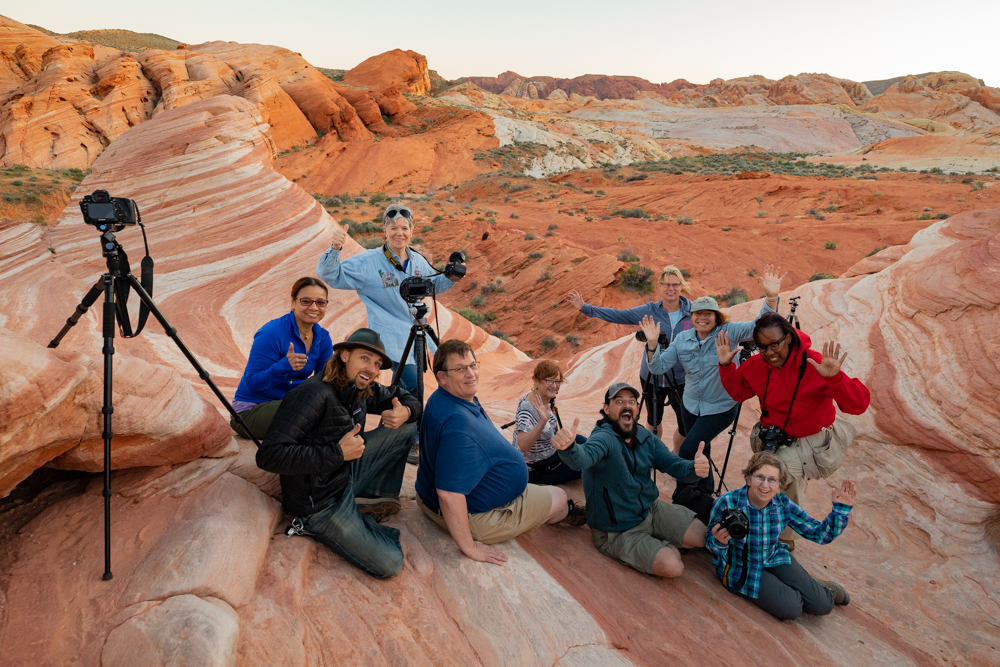 With a name like Valley of Fire, you know it has to be good! This quaint and incredibly beautiful state park is located just an hour outside of Las Vegas and is ripe with photographic opportunities. Striated sandstone lines lead from one rock to the next and you can hardly believe that you’re still in Nevada. March is one of the best times to photograph in Valley of Fire because the the weather is pleasant and the vegetation is green from the winter rains.

After an early rise and healthy cup of coffee we packed ourselves into Aperture Academy’s lean mean photography machine and hit the road for Valley of Fire State Park. As the first reaches of day began to show on the horizon, we parked the van and gathered our gear. We took a short walk and arrived at Nike Rock, our first location of the workshop. Exciting! Once everyone had their gear setup, Scott and I rattled off some settings and gave a few compositional ideas. The group photographed through sunrise before heading to our second shoot. Windstone Arch was next on the list. It is a little know arch as well as little in size, but it makes for a big picture. We spend a good hour or so crawling around in various arches and then headed back to Nike Rock to shoot a little bit more. Before we knew it, it was nearing noon and it was time to head back to the hotel. 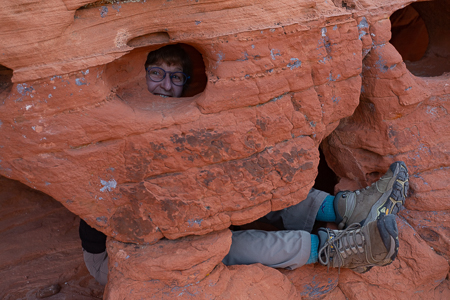 For the second portion of the day we headed out to the park's most famous rock formation. The Fire wave is an incredible formation that you have to see to believe. To get there, we hiked a half a mile though a pleasant wash and traversed a small slab of sandstone. The great thing about this location is there is a lot to shoot in addition to the Firewave. Gibraltar rock is also a prominent rock that makes for a mighty fine photo as well. The group scoured the area looking for compositions. After taking in the location, everyone patiently waited for sunset. We shot the Firewave into the blue hour and made the slightly darker hike back to our van.

We had a another early rise on the second day of the workshop, but you know what they say, the early bird gets the worm. In our case, photograph. We meandered our way through the park, eventually making it to the trailhead we would be taking. We took a short hike to another ridiculous rock formation. This one was know as crazy hill. It literally looks like someone dumped paint in the same location for years and it eventually became a rock. After sunrise, we carried on to Thunderstorm Arch to shoot a few more compositions. Our last shoot included a one mile round trip hike to a fantastic S-curve sculpted piece of sandstone right next to a slot canyon. 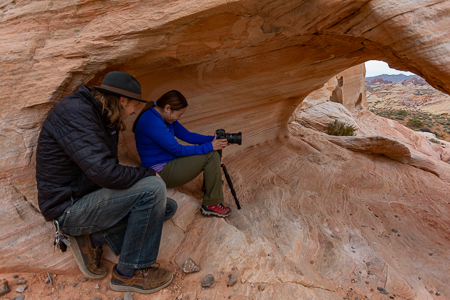 Our last shoot of the workshop was a repeat from the first day. The reason we shoot the Firewave twice is because there are multiple vantage points to shot it from as well was a bunch of other interesting formations in the area. As landscape photographers, it is rare to have really good light on the first time you visit a location. Shooting this area twice doubles our odds of getting that really sweet light. After sunset, the group hiked back to the van and we shared stories all the way back to Vegas. All in all, it was a great trip and a great group of photographers. Scott and I really had a blast teaching this workshop.