As I exited the Jomo Kenyatta airport I immediately recognized the sights, sounds and smells of Africa. The chaotic hustle of Nairobi and the earthy smells brought back a ton of memories – this was my first time back in Kenya in two years after workshops in Tanzania the prior seasons. I was anxious and excited to begin this journey into some of my most favorite areas of Africa, and specifically, the Maasai Mara. 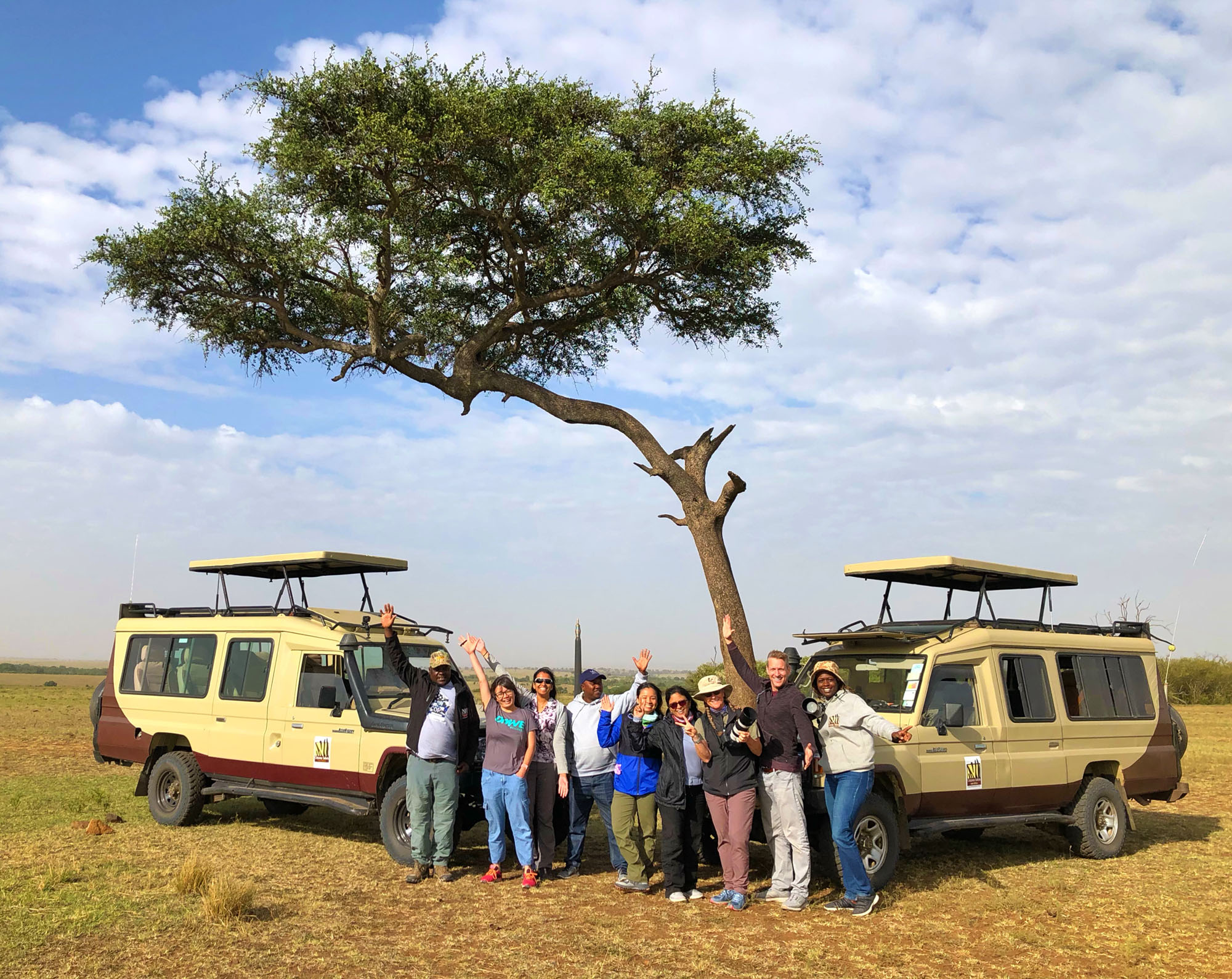 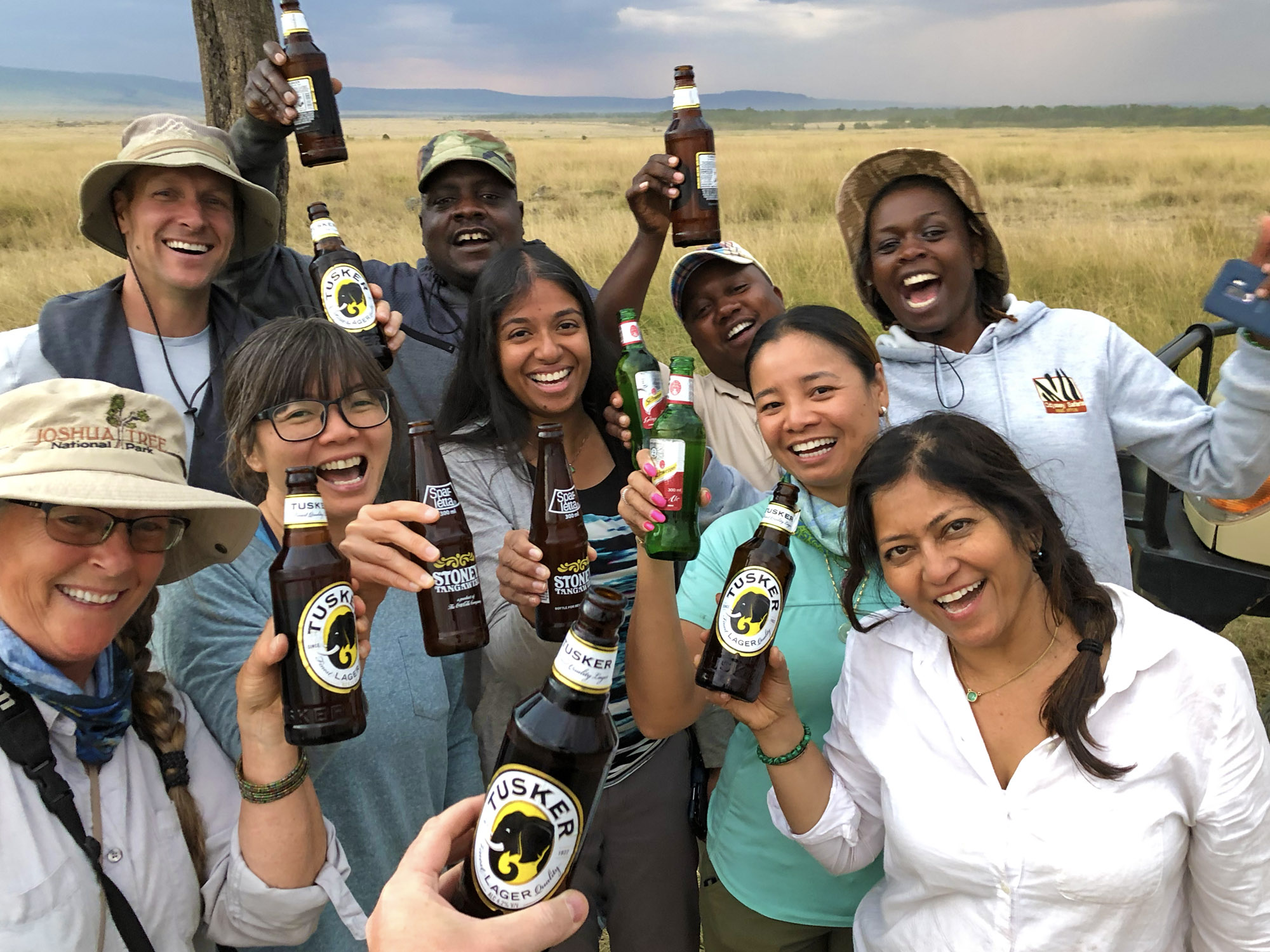 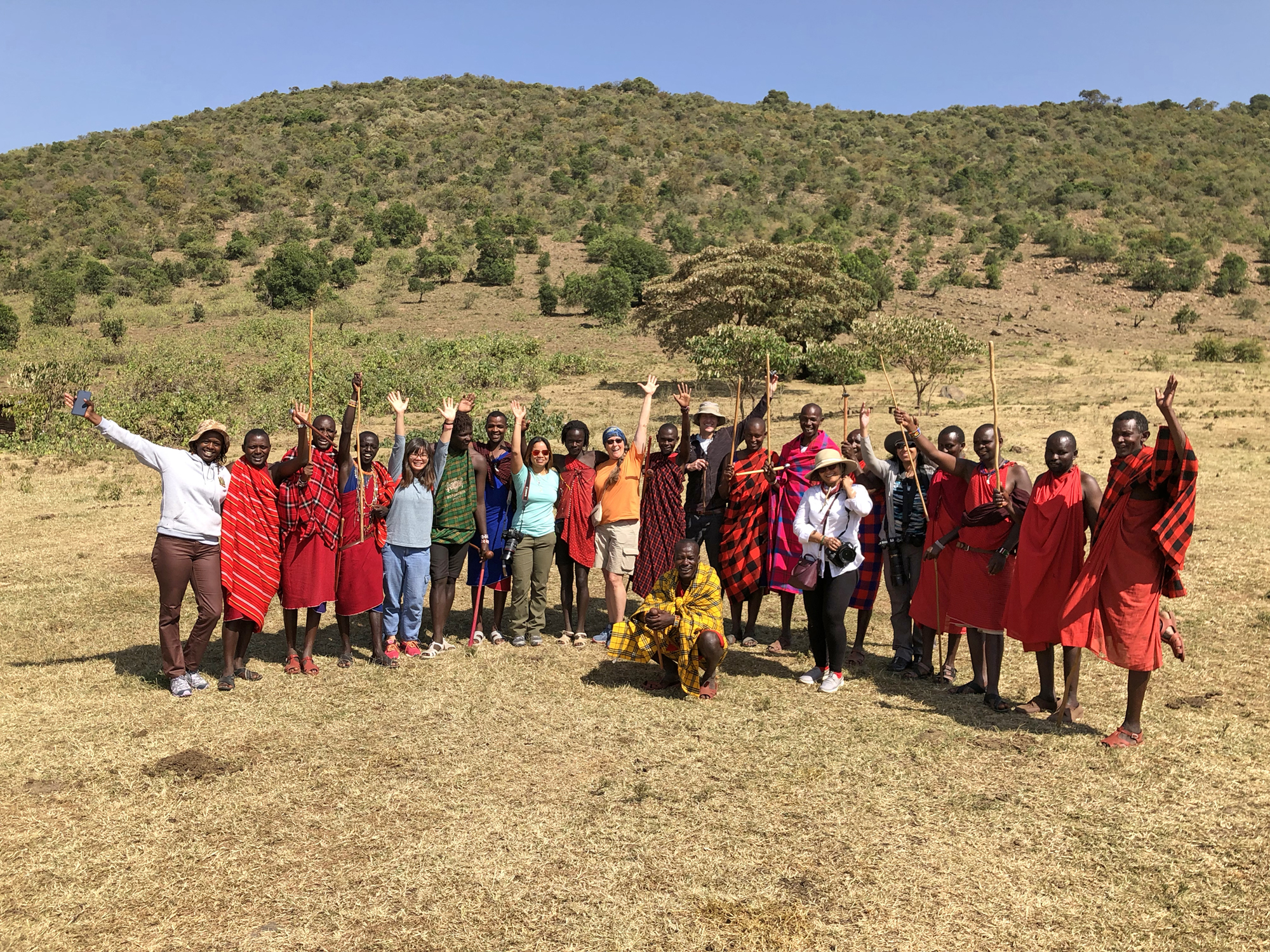 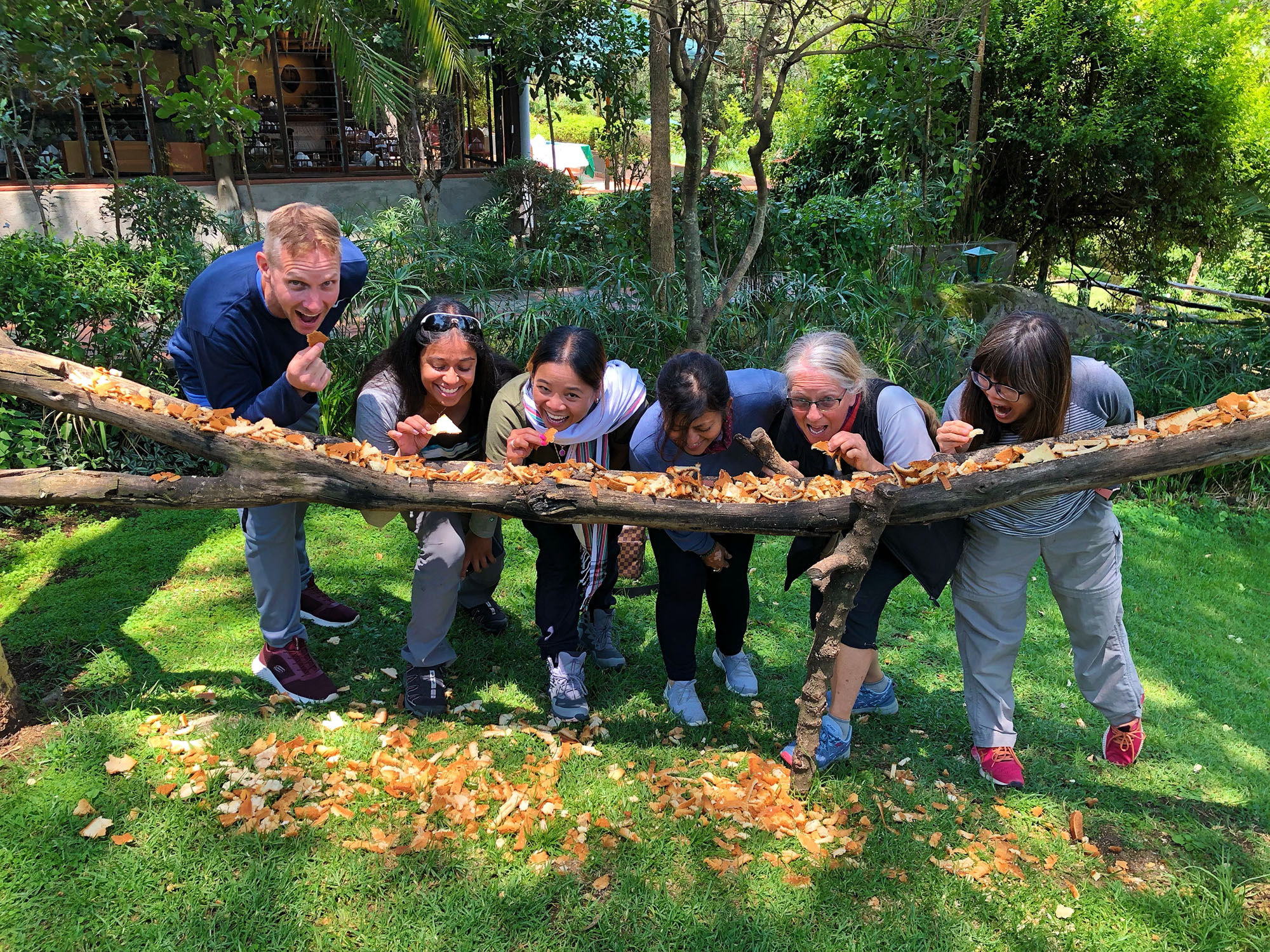 The next morning our guests arrived and we gathered for breakfast and I welcomed everyone with a detailed orientation of the trip. We discussed gear selections, light, weather, etiquette, and a few other topics to help ensure everyone would get the most out of this trip of a lifetime. We then packed up our safari vehicles and headed for our first stop, Lake Nakuru.

Upon arrival, we checked into our lodge and after a quick lunch we were anxious to get out for our first game drive. This was when the great luck of this trip began – in the first hour we spotted a female lion with 4 young cubs! She had them tucked into some bushes but we managed a vantage point to see the cubs nursing all while mamma Simba gazed at a small herd of Zebra in the distance. After everyone had many images we moved on and came upon many species such as Impala, Cape Buffalo, white rhino and many birds that call the shores of Lake Nakuru home. The next day and a half we spent exploring the region and we had so much success. On our second morning we came upon a tower of Giraffe’s in a really amazing environment landscape with the first moments of sunlight illuminating their hide and creating almost a glow from the animal…it was quite a sight! Then suddenly two male lions appear in the road. Brothers it seemed. We were able to capture some amazing images of them walking and interacting.

As our second day progressed, we spotted and were able to photograph a White Rhino family. The juvenile White Rhino was curious and playful with the Buffalo which made for some fun inter-specie images. After lunch we headed for the shore and photographed the Flamingo’s feeding in the shallow waters edge as well as a few other birds such as Egyptian Geese and Saddle-billed Stork.

Next, it was time to head to the Maasai Mara for the next leg of our journey. We made our way to the small dirt airstrip near our lodge and boarded our private charter plane which would take us one hours flight time south into the very heart of the vast and famous plains of the Mara. We landed to a slight breeze and giant puffy clouds in the sky. With cooler temps I had a feeling that our lucky streak would continue…and it did! After settling into our Mara tent camp we headed out to see what the Maasai Mara had in store for us. First sighting, a Cheetah laying in the tall grass watching prey in the distance. She was a beautiful cat and we had ample time to capture many angles and images of this majestic cat. From there we spotted even more lions and captured two male Tope fighting for dominance.

That evening at camp, as dinner was winding down the staff performed with song and dance to celebrate the birthday of one of our guests. They even baked a cake which was really good! With happy spirits we all turned in for the night, looking forward to what the next day might bring.

The next morning a few of our guests opted for a sunrise hot air balloon ride. The rest of the group went out for a game drive and we re-connected the entire group mid-morning after the balloon excursion was completed. And not a moment too soon…we spotted a leopard!! This stealthy cat was stalking a bush, but we weren’t sure why. Could it be a rabbit, a Dik Dik or some other small creature? Suddenly chaos ensues and out of the bush comes a full grown Oribi, with the leopard grasping the Oribi’s throat…the quickest and most effective way for the Leopard to bring down his prey. The struggle continued as the leopard was having trouble with the size of his victim. The power of the cat ultimately won out and the hunt was a success. While it is always emotional to see such raw nature, it is reality for the wildlife of planet earth.

The great action continued over the next couple of days as we explored across the Mara. We eventually made our way to the Serena Mara luxury resort for our final two nights stay. Our first stop after checking in was the Mara river just below the lodge, which is one of the more famous annual migration crossing points in all of the Maasai Mara. Here we witnesses our first crossing…hundreds of Wildebeest and Zebra make this treacherous crossing every year, often multiple times, in search of greener pastures. The challenge is that the river is full of danger... fast currents and oh ya…the Nile Crocodiles! That afternoon we found a couple of really nice herds of elephants that we photographed in very nice muted light.

That afternoon we returned to the Mara river for yet another crossing. This time though, lions were hiding in the brush along the rivers edge and the Wildebeest and Zebra could sense the danger. While we waited, we photographed the hippo’s in the river right in front of us. Their interactions made for some great captures. After an hour of trepidation, the large herd pulled back from the bank and we decided it was time to move on. Not five minutes after we left, we saw a giant dust cloud downstream so we rushed to check it out. Sure enough, another part of the herd had crossed and just as we caught up with them we realized they had been stopped in their tracks by a single Hyena. It was quite a sight to see! Hundreds of Wildebeest stopped in a perfect line, not one willing to move any closer. It was a stand-off on a giant scale and their pause created the perfect photo op for us to capture the plight of these amazing migrating animals.

Our last day proved to be just as eventful as each day prior. We had a short morning before our bush flight back to Nairobi so we decided to triple down and see if we could see one more crossing…AND WE DID! While it was a short, small herd this time, it was dramatic as they were crossing at a portion of the Mara river where the banks are steep. Witnessing them take that giant leap of faith, literally, to the water’s edge is always stunning to see.

A very big thank you and Asante Sana to our 2019 Africa guests – it was indeed one of the most incredible workshops I’ve ever had the pleasure of teaching!

Stephen and the rest of the Aperture Academy team.