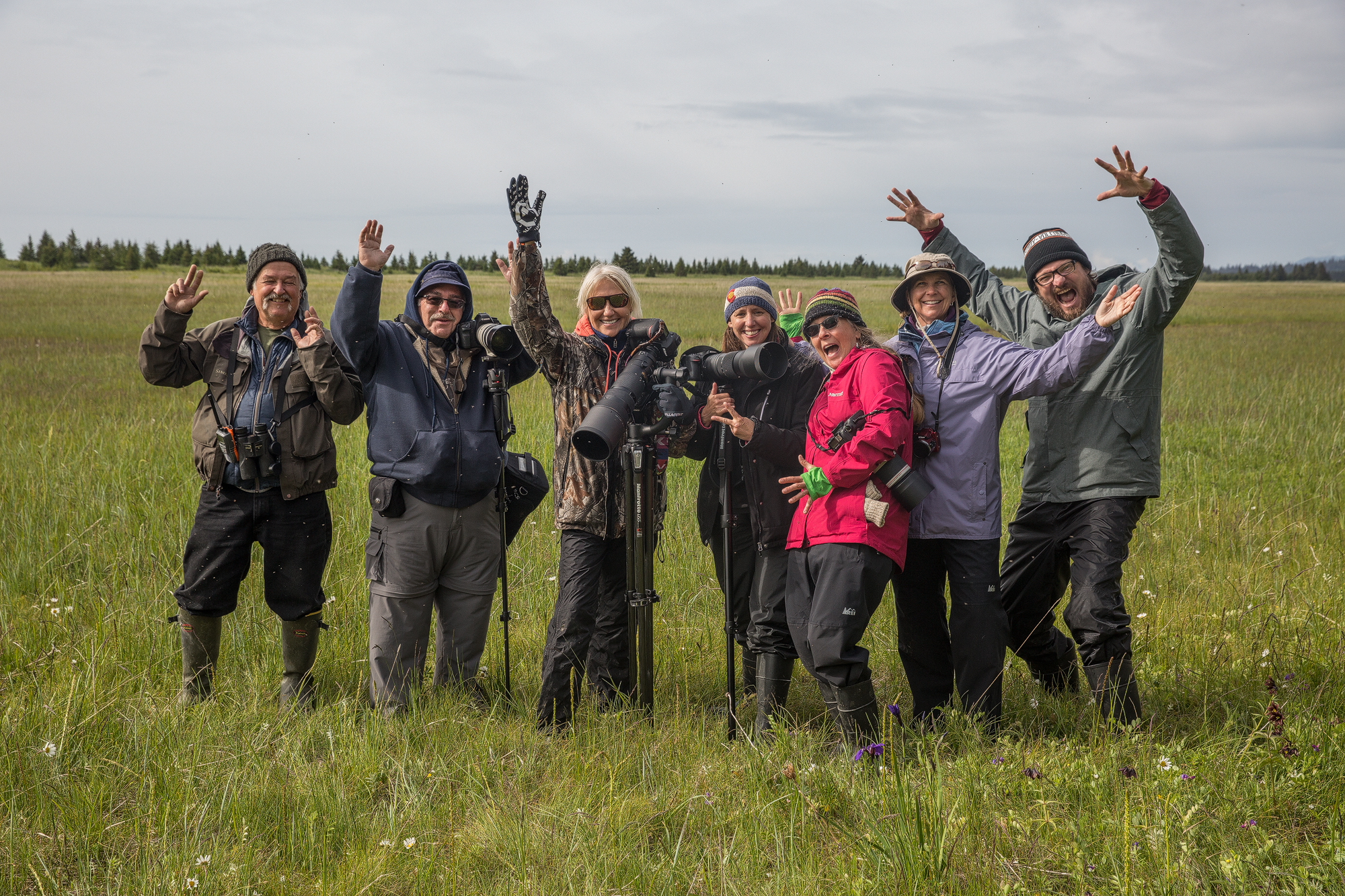 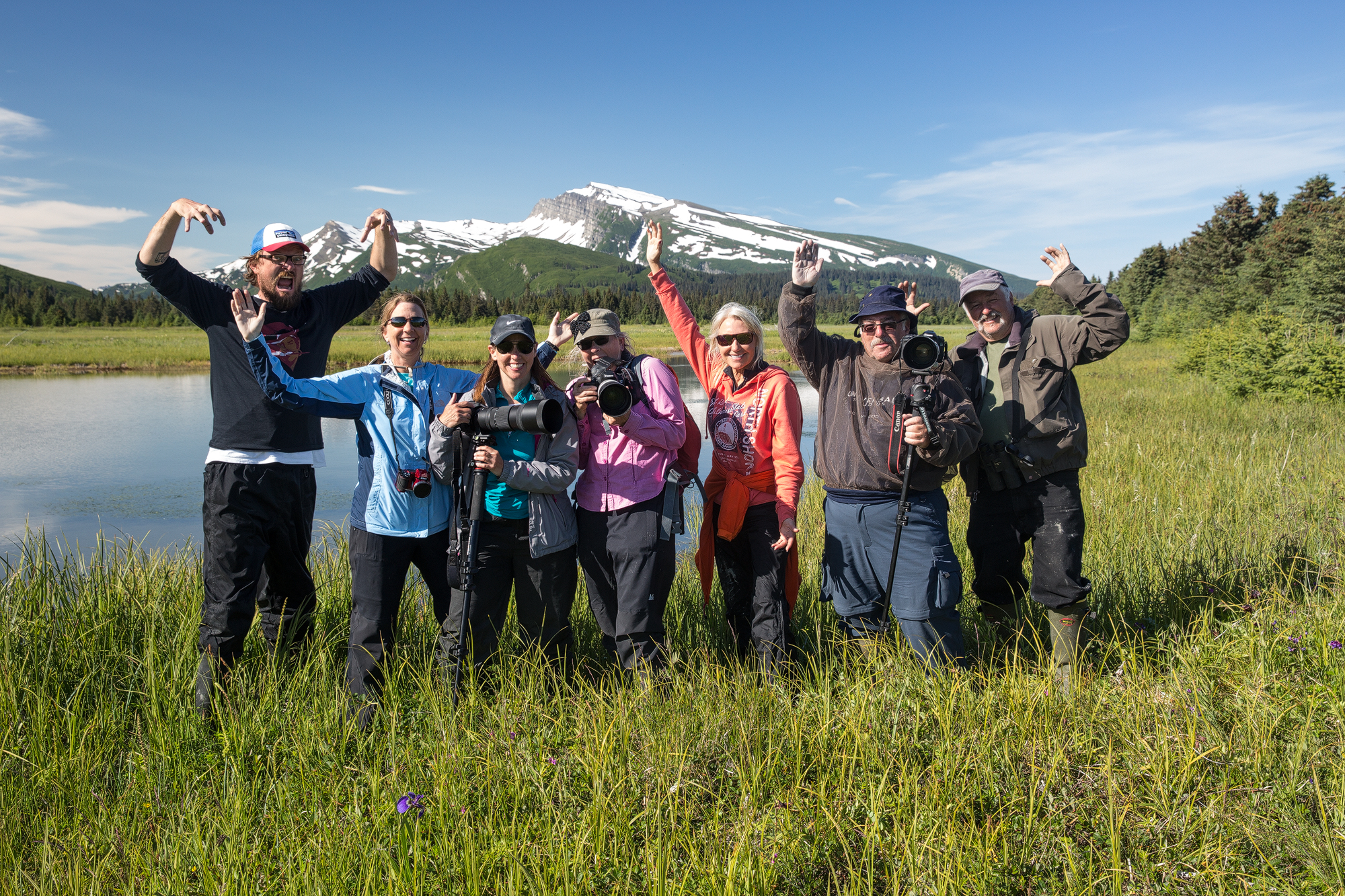 The grizzly bear is one of North America’s apex predators. Their sheer size and ferocity are the stuff legends were crafted from, and their presence in film has always left a lasting impression. If you don’t believe me, what’s the first thing most people would think of when I say, The Revenant? It’s bear attack, right? Well, for photographers, these bears are something to be admired and loved.

While these creatures are scary, and certainly need to be approached with due caution, there are places in this world where they can be seen and photographed with as much safety and peace of mind as possible. One of those places is Lake Clark National Park, where decades have passed and man and bear have learned to live relatively well together. Man doesn’t disturb bear, bear doesn’t maul and kill man. The plentiful food supply and secluded environment have allowed a healthy population of coastal grizzly bears to thrive here...and that’s why I brought my group here.

I met my group of five eager photographers in Anchorage, Alaska, early our first morning. We gathered there to prepare before boarding a small bush plane that would take us to a remote lodge, a short 90-minute flight away. Everyone was excited, and a little apprehensive, about not only their encounters with the bears, but also flying in one of these little puddle jumpers. Plus, the weather was a little dreadful, so we had to wait a couple hours before we were clear to take off. We used our waiting time well and had our orientation, during which, I spent some time going over the kinds of camera settings we would be using. Shutter speed is key for wildlife, so I wanted to make sure everyone knew how to get the fastest shutter speeds possible, and how ISO and aperture played into that.

Once we had the green light to board our plane and set off, Captain Ben flew us to the lodge. Besides the small exception of the headsets not always being reliable, the flight was smooth and without incident...just the way it should be.

We landed on the beach, and our guide, Rick, was there to meet us and take us (and our gear) to the Silver Salmon Lodge, our home for three nights. Once at the lodge, we were shown our rooms and given a delicious lunch cooked by chef Justin and his awesome staff. The homemade breads and cookies were huge favorites. We might be remotely located, but our food was gourmet!

After lunch it was our first bear outing, and we were quickly rewarded. Rick has been working with this lodge for eight years and knows most of the bears. He certainly knows the best spots to find them. Once on a bear, Rick will watch its behaviors and move us as close as is safe...as long as the bear is still engaging in its regular activities...which, in this case, was sedging (which means, grazing on a variety of grasses). 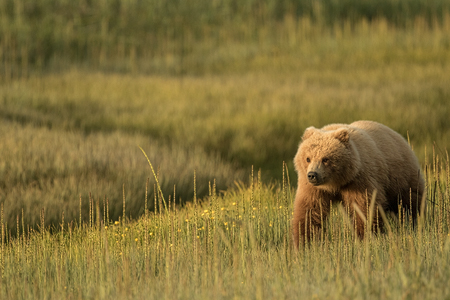 This time of year is still considered mating season, so the boars (male bears) are often in the meadows looking for females to occupy their time. This is a dangerous time for female bears with cubs, because a boar may kill her cubs in order to get her to mate. For this reason, mothers with younger cubs are often still back in the forest, where the babies can scamper up a nearby tree should a threat emerge. 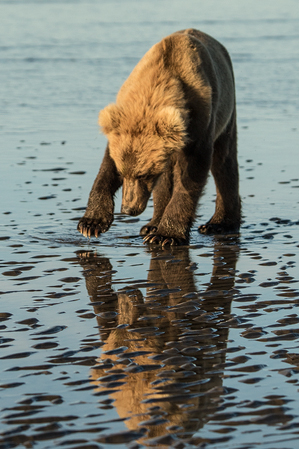 One of the youngsters looked like he was already getting to know the wrong side of being on your own...Rick told us he had messed with a porcupine earlier in the week and was dealing with some quills in his paw. When we saw the two cubs later in the day, one was limping quite noticeably. It’s sad to see this happen, but it’s very much a part of nature, and one that sadly happens often with cubs.

We saw three or four different bear on our first day, and everyone got closer than I think they’d ever been to one of these magnificent creatures. And, when I saw the shots they had gotten on their cameras, it was proof that things were really starting to click.

Our accommodations for the week included a house with a living room, where we could socialize and go over images in the evening. So, that first night, after a tremendous dinner and another drive looking for bear (which we found!), it was time to review images and go over some processing. It was fun to take some time to show them how to make the most of what they had captured in the field that day.

The process for our time in Lake Clark was pretty routine: every morning we woke up, and went for a bear drive. (Each morning we were able to find a bear in the meadow bathed in golden morning light, and really got some beautiful images.) Then, we would go back to the lodge for a home cooked meal, and head back out again looking for bear. Afternoon would fly by, and we’d be back for a delicious dinner shortly after that. Meals included, roast, pork tenderloin, and fresh halibut. Then, of course, there were the homemade desserts to go with it, like fresh ice cream, peach cobbler, and a mousse cake that was out of this world. After a full meal, we’d waddle back to the carts and Rick would drive us around looking for more bear. And, we were fortunate enough to find them every evening. 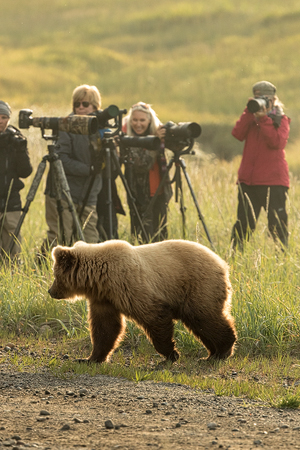 One night, we only had to walk into the front yard! The two cubs were there eating grass. They were still staying relatively close to the treeline in case danger showed up. The cub with the injured paw seemed to be doing better, too...each day we saw him and he was able to use the injured limb more and more. We were all happy that he would probably regain full mobility of his paw and life would resume normally.

Some of the other highlights of the trip included Rick getting us lost in the forest. The trees there are much less dense than you might expect by looking..once inside the forest, a maze of game trails opens up connecting the various meadows in the region. Rick took us on "the scenic route" during this one particular forest hike, which everyone got a kick out of, and we made sure we gave Rick a hard time the rest of the trip.

Our third day, we took a boat trip up the coast. David, the owner of the lodge, has a boat and he’ll take his groups out to see more bears in other viewing areas that aren’t as accessible to photographers, so we were able to walk out to a viewing area and see numerous bear. We counted 12 in one meadow and 13 in another. Most were too far to really photograph, but just seeing that many in one area was a lot of fun. 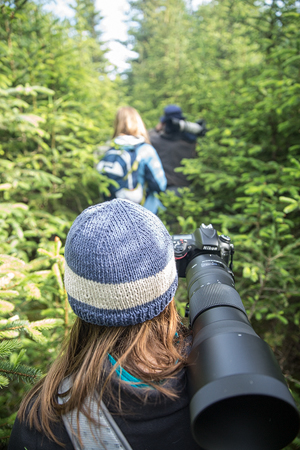 In addition to the great bear meadows, we also saw puffins (tufted and horned), and a whole variety of other seabirds. The weather was absolutely gorgeous on day three, and we were able to see the volcanoes off in the distance, as well. You couldn’t have asked for nicer weather on this day, or on the whole trip, for that matter! Of the four days we spent there, only half of one day was slightly overcast, the rest of the time was sunny and warm.

Later that afternoon, we saw a bear sleeping on the beach...that was a lot of fun for us to photograph. I encourage folks to make lists of the kind of images they hope to capture on a trip...and I’m not sure anyone had that on their list...but it sure was adorable!

Though the routine was set, the days still seemed to fly by. We were up early every day to go out looking for bears, and up late processing each night...and before we knew it, we were on our last morning. Nature saved one of the best experiences for last.

On our last drive out, we found a large male bear clamming...and the light was awesome. Not only that, but, the low water left beautiful reflections of the bear with some great mountain scenery reflected behind him.

He actually got within about 10-15 feet from us. We never approach a bear closer than about 25 yards away, but we don’t move if they come towards us...so it’s not uncommon for them to walk right by the group on their way to looking for more food. And, the resulting billion shutter clicks didn’t seem to phase them one bit. 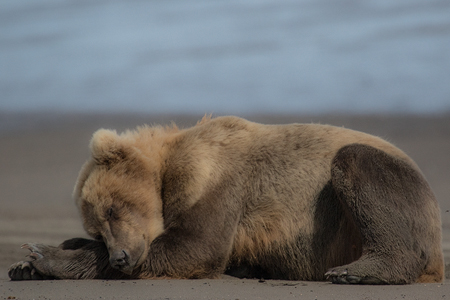 Everyone was super excited after that morning, and when we got back to the lodge and showed the other groups (who were too tired to go out that morning) what we’d seen...they were ALL envious.

Wildlife photography is all about putting yourself in the right space to let the magical moments happen, and we did just that, and were rewarded! Everyone came hoping to see bears, and get a couple good shots of them, and I think they succeeded!

We all got along so well that David thought we’d all known each other before we came on the trip. He was surprised to find out that we’d all just met a few days earlier. We gave Rick a pretty rough go of it a few times, but he threw it right back and joked with us as well. It really was a tremendous group with great camaraderie. The weather and the bears were more than cooperative, too. We really hated for the time to come to an end….but as all good things do, this experience had to, as well. Nothing but smiling faces loaded the planes back for Anchorage our last morning. They had come to photograph wild bears, in the wild, and they also came away with great friends and memories to go with their images.

Thanks for a great time!

Brian, and the rest of the Aperture Academy team