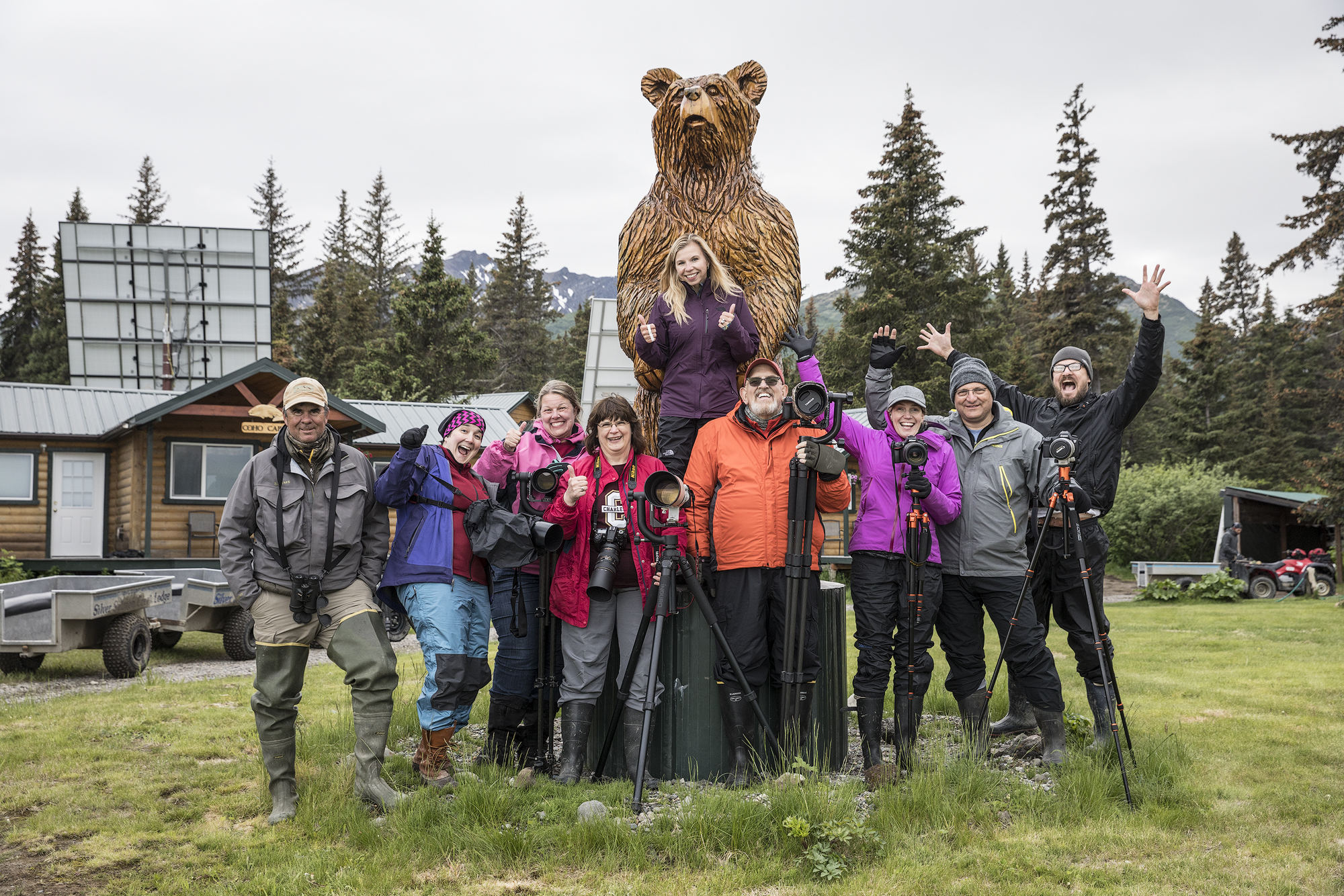 The Grizzly Bear is one of North Americas' most feared predators. They've long been the subject of tales depicting them as vicious killers. Movies have often portrayed them as the villain...and y'know what? Those tales are not too far from the truth! Grizzly Bears are vicious, and they are certainly dangerous in the right circumstances...that's what makes getting photos of them so very difficult! However, there are a few places in the world where these massive bears have learned to live somewhat harmoniously with humans. One of these places is Lake Clark National Park. Here the coastal brown bears have plenty of food for them during the summer months. The beaches provide ample clam beds for them to dig in. The meadows provide all the tender foliage that a growing bear could want. During the later summer months, spawning salmon and plentiful berries provide the added calories these bears need to sustain them through hibernation. These bears are still plenty capable of doing damage to a human, but there's so much darn food, that they'd waste time and calories to kill you...this makes them the perfect subjects for photography!

I met a group of 7 awesome bear enthusiasts one overcast morning in Anchorage's Lake Hood airfield. This air field is the largest float and sea plane airport in the world. While we wouldn't be landing on water, our bush plane was also taking off from the nearby runway. These planes are all tiny, and it takes 2 planes to take our whole group and all of our belongings to the lodge. Our flight was smooth, and everyone enjoyed looking out the windows at the patterns and textures of the wild Alaskan countryside. I'm not much of a fan of these little planes, but I made do as well. Once we crest the final mountains, it's time to land right on the beach where our lodge hosts are waiting for us with wagons towed behind an ATV. After unloading our gear, we met our local guide Dave. Dave has been leading tours in the area with the lodge for many years, and knows most of the bears behaviors, and is able to help us get as close as we can to our subjects in a safe and respectable fashion. Only moments after arriving at the lodge, we see our first bears making their way out through the lush meadows on their way to the beach for clamming.

We quickly unload our gear, grab our cameras and head out for our first shoot. Having been to this area myself for a few years, it's fun to see bears that I recognize from a couple years ago. A mom and her two cubs were on the beach clamming. When I was here in 2015 these cubs were just coming out for their first experiences on this beach...watching their mother clam. Now 2 years later, they're pros! I help the group to make sure their ISO is set properly, and their getting those nice, fast shutter speeds to capture the bears while they work. Everyone is packing some seriously large lenses, so faster shutter speeds are vital to making everything nice and sharp! From what I see on those cameras, everyone is really getting some cute shots. The overcast conditions are nice to help give us softer light, and less harsh shadows. 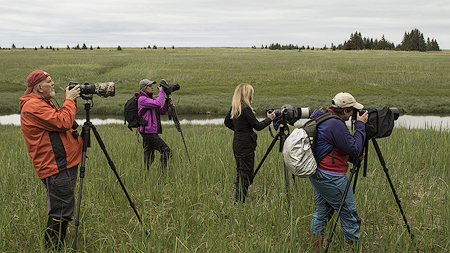 Our first day is barely beginning and we're already filling up those memory cards! After we follow the bears for a bit, it's time to get back to the lodge for lunch. The Silver Salmon Lodge really goes all out with the food...fresh desserts accompany every meal as well. Like the bears, you may actually put on weight when you come here! After Lunch we head back out to look for more bears, and luckily it doesn't take too long before we find another mother with her 3-second year cubs. These little guys are adorable! THey're so fluffy and cute. Mother and cubs are stocking up on sedge grass and roots in the meadows...but it doesn't take too long before 2 of the cubs get bored with salad, and want mother to nurse them...which she does! Being so close to the mothers when they nurse is AMAZING..seeing how loving, and gentle they are with their cubs really pushes out any of those nasty ideas of bears mauling people. (note: they still totally will maul you almost anywhere else in the world) Before we know it, it's dinner time...and we're back at the lodge looking at plates filled with food Justin and the rest of the kitchen staff have been busy preparing us all day.

After dinner we take one more loop around looking for bears. After diner we find the mom and two cubs in a nearby meadow...and it seems they've found a toy. The local NPS ranger had left her life jacket in a spot where the bears could get to it, and get to it they did. We had a good laugh as these two bears completely destroyed her flotation device (which is required for all water activity in the park) They tore out all the foam, played tug of war with it, and chased each other in the meadow trying to get it. It was so much fun a local red fox even showed up to watch the action. While I'm sure the ranger wasn't thrilled with the results...we all had a blast watching the bears and their new toy.

First day was a blast! And we still have two more full days. 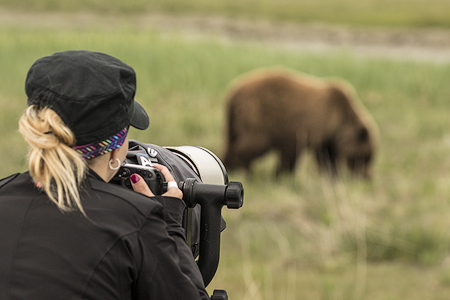 Day 2 started out with a good old fashioned Alaska rain. Rain is a common occurrence here in the park, so we all bundled up in our wet weather gear, and decided to brave the water. Turns out, the bears weren't fans of the rain either, and after one loop of our territory, we had no bears to show....so we opted to go back and dry out. The remainder of Day 2 saw us finding a large male bear who was courting a 4 year old female. June is the tail end of the mating season, so the larger boars are still in the area trying to sow their oats before heading out. The presence of these males is also what keeps the mothers with the first year cubs away. Dave thought the big male bear was a little bit of a creeper going after such a young bear...but nature doesn't seem to hold the same values as we do...so our group just sat and observed, wondering if we'd get a little lesson in the birds and the bears. The bears eventually tired of being in the meadow, and pushed off elsewhere. We took the chance to head out to the beach and photograph some more clamming bears! It was the same trio from the previous day. It seems that some bears are just drawn to clamming more than others. 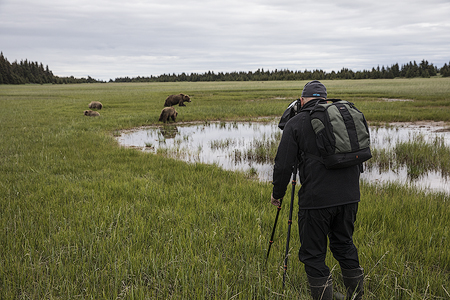 That afternoon we did one of our first post processing lessons. Here I used the large screen TV in the newly created media room to show folks how to bring out the best of all their bear shots...and there were a ton of great images. Everyone seemed to have 10-15 images already that they loved. Those are great odds for wildlife shooting! Our mid-morning we had a great experience with our mother and two cubs. We got to watch her nurse the cubs (which we all thought they were a little TOO big to be nursing) but afterwards they took a big old snuggle nap together, right in front of us! Then they lined up for a perfect shots side by side. It was a really great moment...so much so that I think everyone was about done with bears!

Day 3 we were so filled with bear shots that we opted for David the lodge owner to take us on a boat ride to a nearby bird sanctuary. The waves were a bit rough that day, but everyone was game. The first cool thing we saw was a hug colony of kittiwake. Their numbers were as impressive as the volume of their cries. Bald Eagles and crows flew through the area looking for eggs, and unsuspecting birds to prey on. This got the kittiwake even more upset...which was great for our cameras! 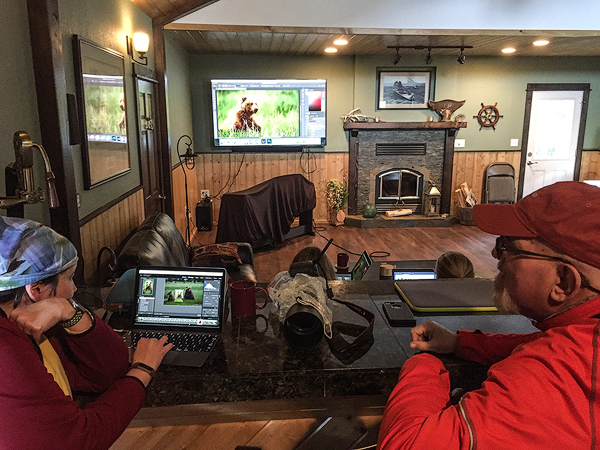 From this point it was off to the rock to look at puffins. The puffins were not perching this time...they were all out in the water looking for food. David was great at approaching them in a way we could grab focus and have them fly right past us. shooting moving birds from a moving boat, while bobbing up and down in the moving ocean is NOT easy...but everyone got a couple good images they liked. It was a true spray and pray situation...once you found the puffin, you had to try and track him while he was floating on the water, because as soon as they started to fly, it became even harder to find them.

The birding was nice break up of our trip, and we all got to enjoy the hectic surf on our drive back...

We finished our last night with a little more processing, and relaxing in the lodge. It was Ferns (the kitchen staff) birthday so we all had cheesecake for dinner (with the real food of course) What a great meal to top off our all around great experience! The next morning everyone opted to go out for one last loop to see if we could find any more bears. The bears were still sleepy, so we went back to the lodge four our last breakfast, and to get our things together for our flight out. Not many people will ever get the chance to experience grizzly bears the way we have the past few days. I think everyone came here hoping to have some special encounters with the bears of Lake Clark...and I think the bears delivered the goods. I hope everyone enjoyed the week...and I look forward to seeing you all again down the road!