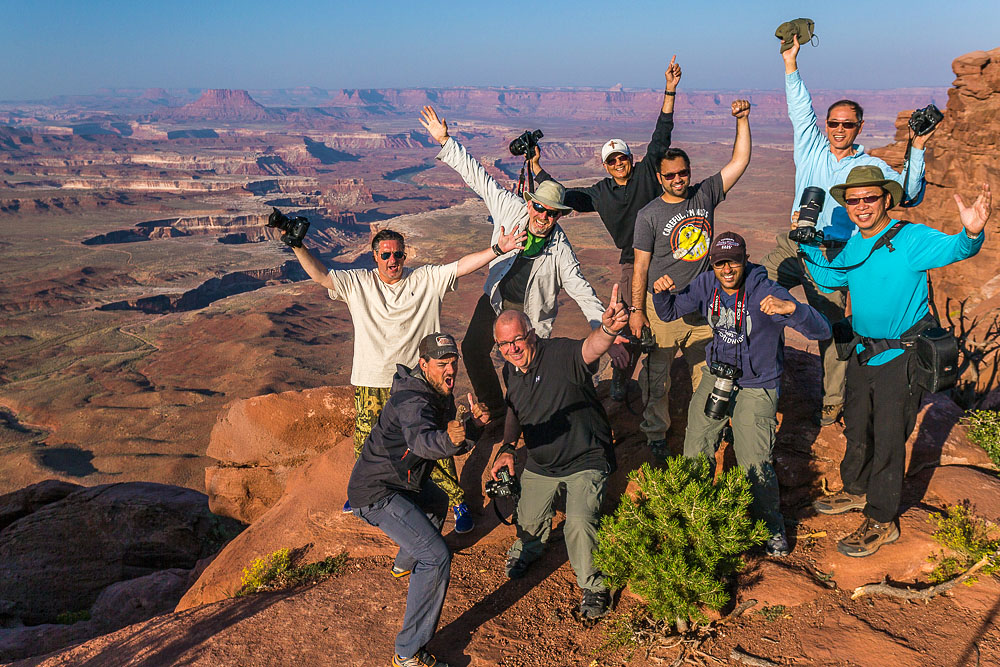 The American Desert Southwest is a truly massive area spanning nearly six entire states, and encompassing over 500,000 square miles, including 15 national parks and monuments. One could spend a lifetime in this area and not see it all. And some have! The Aperture Academy has conducted dozens of workshops in the area and we have literally only scratched the surface. Our Desert Southwest Landscape workshop is a three day adventure focusing on a only a tiny part of what this vast area has to offer. It was up to myself and fellow photographer and pro-instructor Paul Porter, to lead a smaller group of eight gentleman into the desert and take them to some of the most awe inspiring natural wonders in this part of The Desert Southwest. 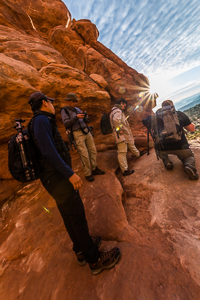 Moab, Utah. Sunrise in the desert comes early in the summertime. And even with a short drive and hike to our first location is was still necessary to wake up and leave before 5am. This particular workshop is notorious for the early starts, and this weekend was no different. Our first stop of the day was to capture the morning light at the North Window arch in the aptly named Arches National Park. After an easy scramble up to a little shelf, one is greeted by the North Window Arch, and looking through the arch, the Turret is perfectly framed with the desert in the backround. We stayed in the area for awhile after sunrise, working compositions around both arches, before heading down to Double Arch, which has a massive double opening to the skies above. The clouds were looking good this morning and provided the perfect backdrop as we pointed our cameras skyward. One last stop before returning the hotel was at the Courthouse Towers. This huge monolith just south of Park Avenue, is met by a large open slickrock plain, riddled with pothole looking formations, that fill with water seasonally after a big rain. We were lucky that just 5 days before our arrival, the area was hit with a couple big thunderstorms, providing some reflection pools for us shoot. We walked around the potholes for a while, until the skies cleared and the temps rose, and then it was time to retreat for midday. 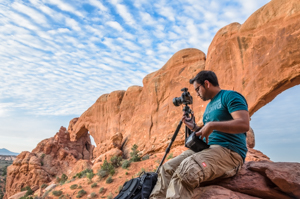 After midday break, we came back to the Park Avenue area, this time to walk inside the canyon, before stopping at a point not far away, for some panoramic lessons, before traveling north to arrive at our sunset spot amongst the monoliths in the Balanced Rock area. By this time the clouds had cleared almost completely away from the direction we intended to shoot in, but we were still treated with some spectacular light for sunset. After the show at sunset, our group was still amazingly giddy and had some energy, so decided to take them back to Double Arch for some night photography with the stars while lighting up the massive cavern underneath the arch. I think everyone was particularly amazed with how much of the night sky we could actually see once we (cityboys) left our hometowns. 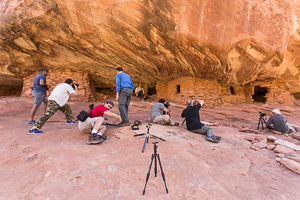 Today we had a long drive planned south into the Cedar Mesa area, which is chock full of ancient Pueblo Indian ruins. So we skipped sunrise, and headed over an hour south to the north fork of Mule Canyon, home of House on Fire. Its called that because of the way the light reflects off the canyon floor to illuminate the ancient granary, tucked underneath a fold in the canyon wall. Over the millennia, the rock face above the "house" has cracked away in a pattern resembling stria, full of different colored orange rock, which changes color under the right conditions. A small hike out the site and the group was immediately astounded by the site, took to photographing every angle for next couple hours. After everyone had their fill, it was time to head back to civilization for a midday break. 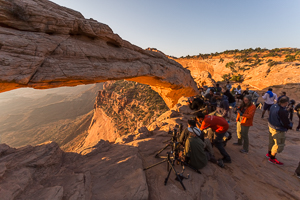 The entire area around Moab is full of natural beauty, although only a small portion of the wilderness is designated National Park. One of these areas, along highway 128, most people just drive right on through without stopping. The road follows the curvature of the Colorado River for about 33 miles before returning back to interstate 70. This small canyon has so much to photograph! We spent the rest of the evening driving up and down, stopping at multiple locations to take in the scenery, practice panoramas, shoot sunset among the monolithic mesas, and make a tire change (due to an untimely blowout). I cant say how happy I am that the whole crew was eager to help Paul and I change the wheel out, and with everyones help, we were able to get everything in order in less than 10 minutes, shoot a fabulous location, and then get down the road in time for sunset looking up at 4 mesas scattered in the canyon valley in front of us. 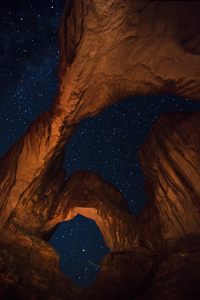 Labor Day, the day everyone was either looking forward to, or dreading. Mesa Arch is a small 30x10 foot arch in Canyonlands National Park; it is arguably one of the most photographed objects in all of the southwest. So many people come to the arch, in hopes of capturing its beauty at sunrise, when the underside of the arch is illuminated with a brilliant red-ochre light. Since the site has become increasingly popular in recent years, we have had to take steps (waking up REALLY early) to make sure our groups get a great spot to shoot it, since the area in which its rests is very small. Our group was not phased with the early rise time, and since we were first on scene, we spent 2 hours unabated, photographing the arch with the night sky above. As daybreak came, we jostled for positions in time to catch one of the most beautifully consistent sunrise spots in the world. And all was good. After the light show, we headed deeper into Canyonlands to check out Grandview Point and the Green River Overlook, both of which were hindered by the amount of haze in the atmosphere, but after a successful group shot and some moments to bask in the quiet (Canyonlands is on record as the quietest national park) it was again time to retreat to the comfort of the shade after our long morning.

Our last and final hike of the trip was to Delicate Arch, probably the single most reproduced image of a natural structure, at least in Utah (every license plate has one). The hike to Delicate has a 500ft elevation gain, and little to no shade from the sun (oh and youre in the desert). But even despite the challenges, nearly everyone that comes into Arches National Park, makes the journey, to see what all the fuss is about this little arch on a state license plate. Let me tell you the fuss is worthy. When you come around the corner for that first time after the 1.5mi hike, and youre greeted by the arch and its surroundings, your breath is literally taken away, and most moved to silence. Even though the sunset wasnt particularly spectacular, the scenery does enough to wow everyone not to mind.

After sunset, and the nice peaceful walk down the slickrock to the van, amazingly, our group didnt want to be done! So we headed over to Balance Rock once again to shoot it against the starry skies. The formation was illuminated by the soft light of the moon, so thankfully there was no need for torches. The haze we had experienced earlier was still persistent, but the night sky was still readily visible, as was the arm of the milky way. After about an hour of shooting, everyone was finally ready to call it a night. It was the perfect way to end the 3 day adventure in the desert.

Scott, Paul and the rest of the Aperture Academy Team