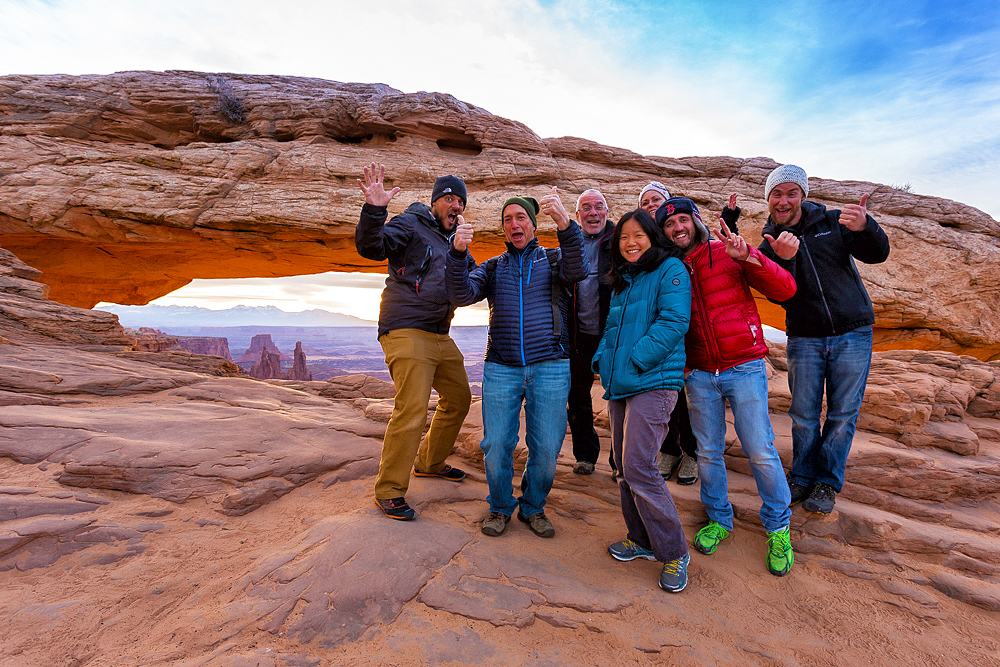 The Desert Southwest is a huge expanse of wild beauty enveloping parts of California, Arizona, Nevada and Utah. The desertification of the American Southwest has left behind some of the most beautiful and intriguing features in all of the United States, along with some of the most rugged territory and extreme environments. From the Joshua Trees in Southern California, to the high painted deserts in eastern Utah, the American Southwest is littered with things to do. So, where to start? The Aperture Academy has many offerings to probe the secrets of the southwest and this time, myself and fellow instructor Phil Nicholas had the pleasure of leading a group around the eastern high desert near Moab, Utah, where the Colorado plateau has become known as "Red Rock Country."

Moab is a bustling small desert town situated in the best spot for adventuring into the northern parts of the Colorado Plateau. Arches, Canyonlands, Cedar Mesa, and many more spots near the river are prime photography locations, as well just for hiking and off roading. This little desert town is our home away from home for the duration of our workshops here. And it all starts with an orientation at our hotel just outside of town. Phil an I led a round of introductions and talked about what was to come on the next three days of our adventure into the desert. Everyone seemed excited, even when we mentioned what times we would have to waking up in the morning! Sleep time! 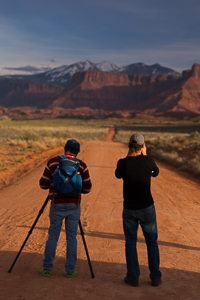 The weather reports had indicated full sun today, so we swung the workshop around and decided to head south into Cedar Mesa and check out the North Fork of Mule Canyon, where the famous House of Fire is located. Skipping a sunrise doesnt mean you get to wake up any later in our line of work, as the drive and hike out to House on Fire is still quite a long way from Moab and we had to get their before the sun got too high. And what a magnificent sight! Perched just below a rocky outcrop lies an ancient Anasazi granary where the rock face above it has striations and cracks in the rock to make it look like flames. Hence the name House on Fire! After a short walk back to van and longer drive back to Moab, it was time for a midday break. 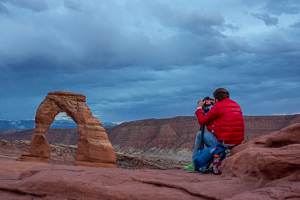 In the afternoon, with more favorable skies (and less traffic) we headed into Arches National Park, to Park Avenue, which is a gorgeous canyon with towering red rock walls and greenery down below. Phil and I took the group down and explored the area, working on composition and light with canyon walls and desert flora. We spent about an hour touring the canyon before heading to panorama point for a quick lesson in panoramic shooting while the skies were lighting up beautifully in anticipation for an awesome sunset. Balanced Rock is a monolithic pillar placed perfectly in between a sweet elevated vantage point and the La Sal Mountain Range. This time of year the La Sal's still have quite a bit of snow on the peaks, and that made for a great background against the red color of the Balanced Rock for sunset. The clouds overhead lit up perfectly as did the rock and fading sunlight cast a brilliant reddish hue on all that was viewable. What a way to end day one! 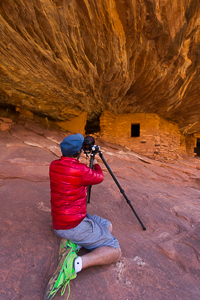 The early bird catches the worm! Today was an extremely early start for photography, as we headed out at 4am to beat the crowds and do some light painting at Mesa Arch in Canyonlands National Park. Mesa Arch is probably the second most photographed arch in the Desert Southwest, and with good reason. The trial is easy to follow, even in the dark, and its perched HIGH above Buck Canyon and provides an unparalleled view of the surrounding area and the La Sal Mountains. We got there early enough to do some star photography, which everyone was excited to do, and after a little setup time, we had everyone cooking shot after shot with the milky way and stars in the background. The sunrise was no slouch either as the skies cleared just enough to let the sun poke through a couple times and give us all a little sunburst treat! We made one more stop at Grand View Overlook, one of the quietest places in the National Parks System, before heading back to Moab for some more midday rest. 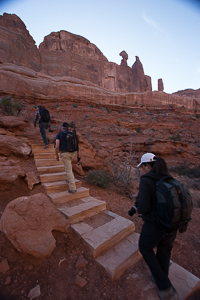 After an extended break to sleep off some z's from our super early morning, we headed north along the shores of the Colorado on Hwy 128, which snakes back and forth along the river and has many spots to take in some sights that arent in the National Parks. Fisher Tower, the Colorado River, and Parriott Mesa, Castleton Tower, and Adobe Mesa are just a few of the spots visible from the road. We drove around and shot each of them, hoping for the skies to do their magic upon sunset, where we settled down for views of Parriott Mesa and Castleton Tower. Although they werent as brilliant as the night before, the scenery is still no less beautiful.

Last day! Today we ventured back into Arches National Park for sunrise at the Windows. We again arrived early to beat the crowds, and our sunrise spot, perched above the valley floor, was open and ready for business. Getting everyone into position is a slight challenge this early in the morning, as there is a little bit of a scramble to summit the perch and all in the dark. But once positioned, everyone was in awe of the view! Through the North Window, the Turret Arch and surrounding area is framed perfectly in its massive hole, allowing for spectacular views of the park beyond. Sadly, the clouds we had wanted to see were behind us over the mountains, and dissipated quickly, but the light on the Window and Turret Arch were as brilliant as ever, and without the crowds on this Monday morning, there was nobody to spoil our shooting! After Phil and I safely got everyone down from the perch, we headed down the road to Double Arch to finish off our morning shoot. With clear skies above, the we had our group try to rethink how to shoot it, and focused instead on some more detailed and abstract shots using the curves of the arch and the light and shadow hitting it. 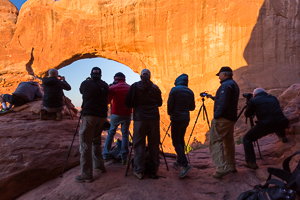 After a small break, and some post processing we headed back into Arches for the final shoot of our three day weekend. Delicate Arch is by my guess, the most photographed Arch in the Southwest, maybe even the US! Its an icon of nature that graces a majority of the license plates of the state, and even though the hike up can be long and arduous for some, its always a packed house waiting for sunset up there. Isolated thunderstorms provided some really interesting skies above, but rain never actually came, preferring instead to evaporate above and create nice curtains (Virga) of mist for the sunlight to catch. When we reached the summit, we greeted with WIND, lots of it. We all hunkered down and did our best to shield ourselves, but it eventually subsided and the light was epic with clouds overhead. Sunset time at Delicate is sometimes a tense one, with all the photographers perched waiting for the right light, and the seemingly endless line tourists competing for selfies with the arch. At the right moment, a chorus of "MOVE PLEASE" erupts from the gallery of photogs and the clicking begins, unimpeded by the bodies of the tourists. Its fun to say the least! With the light show soon over, Phil and I gathered our troops, and headed back down the lengthy trail as the skies began to darken and we all bid a fond farewell to one of the most beautiful places in the Desert Southwest, maybe the world.

Scott, Phil and the rest of the Aperture Academy Team