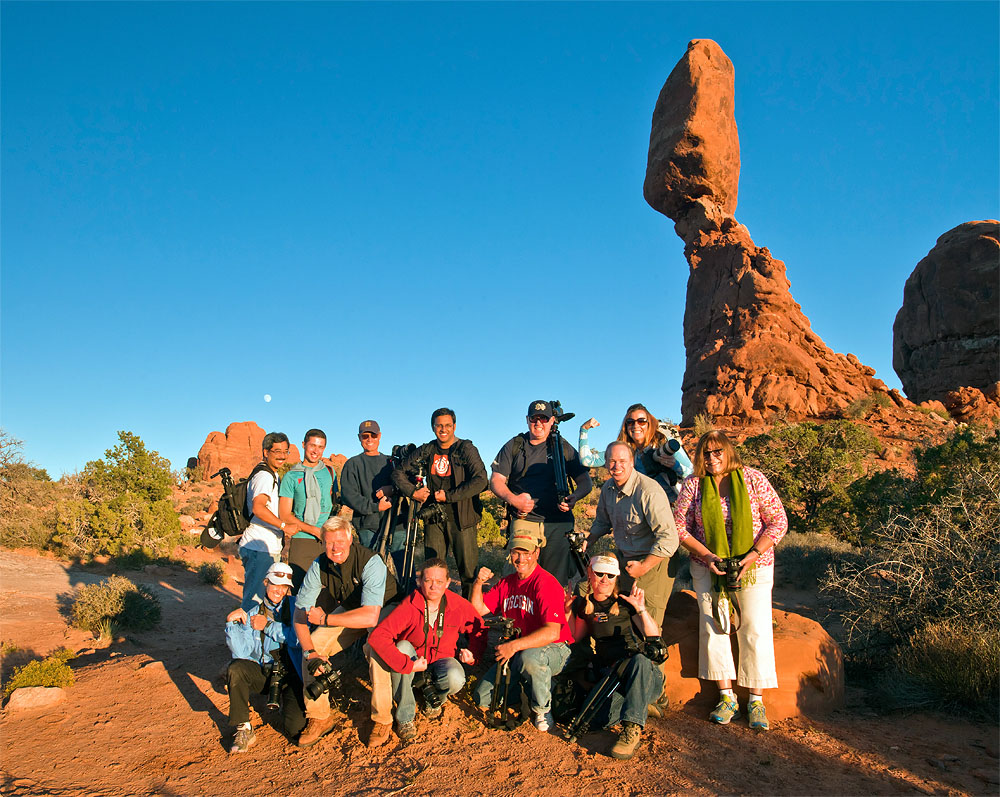 When one thinks of the southwest desert, images of dry, cloudless, desolate landscapes often come to mind. Mother Nature however had something a bit different in mind for us. On this particular workshop, 11 participants from all walks of life and all across the United States along with instructors Scott Davis and Ellie Stone came together to spend two fantastic days photographing the unique geological structures found throughout Arches and Canyonlands National Parks.

Our first morning, contrary to popular dry desert myth presented us with a slow but steady drizzle of rain and low overcast skies. We had awoken way before sunrise in preparation to catch the morning sunrise that the local weatherman had semi-assured us (only 25% chance of rain). Landscape photographers (and this was a hearty bunch) are rarely defeated by unpredictable weather and more times than not, often welcome unsettled weather in hopes of adding more drama to the image. Just like the Marines, we improvised, adapted and overcame the weather by taking advantage of the monochrome conditions. Its true that mountainous deserts are capable of glorious sunrises and sunsets when all is bathed in beautiful golden light but its also true that some of the most stunning desert images have been done in black and white. Just ask the Ansel A. clan. For the first few hours of the morning, we worked on compositions and getting proper exposures that incorporated the enormous natural stone arches that are scattered throughout the park that gives Arches NP its namesake. It seems that wherever one looks, a rock arch of some sort can be found. Some span hundreds of feet and rise off the desert floor like giant rock suspension bridges while others are just large enough for a single person to walk through. Our morning was spent working with arches of the enormous brand. Since the overcast skies afforded us a soft diffused light throughout the morning, we were able to work a variety of locations longer than if the sun had been out. Late morning and midday sun tends to wash out the colors of the desert. Not an issue on this morning. Despite the wet and somewhat cold conditions, our group was enthusiastic and a fun supportive demeanor pervaded. As we left the park just before noon, cautious smiles erupted as a small patch of blue sky broke through the cloud cover. The forecast was calling for slowly clearing skies throughout the day and this time it looked like the weatherman might actually be right this time. 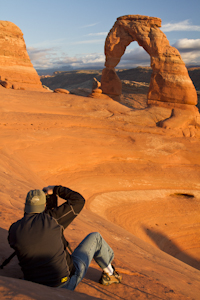 Following a midday break, we regrouped and headed back out to Arches NP in hopes of garnering some sunset images. Conditions were looking promising. Puffy white clouds set against blue sky had replaced the earlier complete cloud cover. The sun was out. People were getting giddy. The hike out to Delicate Arch is probably the most challenging of all our destinations on this workshop. At only 3 miles roundtrip, it's not terribly far but in one direction, the route is uphill so we arrive at the trailhead with plenty of time to allow for a slow leisurely walk. The walk is worth it though as one rounds the corner and this lone rust colored arch about 70 feet tall reveals itself. The rust colored sandstone takes on a deep orange hue as the sun gets lower and lower in the sky. Arriving early and setting up our camera comps to follow the natural contours of the landscape to the arch, all the ingredients started to come together. The sun broke through the clouds in the last 30 minutes, just long enough for everyone to get some postcard perfect images. The fickle weather pattern was beginning to work out for the better now. The following day promised even better shooting conditions. 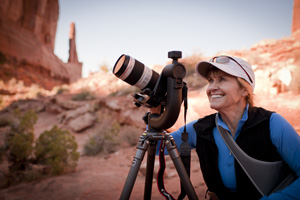 The next day began in the uber wee hours of the pre-sun morning. Thankfully, not a cloud in the sky could be seen. Mesa Arch was our destination and its a very popular iconic photo spot. Prime photography real estate is somewhat limited there so its critical to get our clients there early to get the best shots. We arrived with plenty of time to discuss and prepare our camera settings for the soon to be rising sun. There's a reason this is such a popular shot. As the sun crests over the horizon, it lights up the interior of the arch with a golden orange glow. Set against a near 1000 foot sheer vertical cliff coupled with rising vertical rock monuments in the distance, the scene is truly other-worldly. As the sunrise grew ever closer, more and more photographers began showing up. One semi-late arrival made it quite clear he was there to get the shot so space would have to made to accommodate him. Luckily there was a bit of room to squeeze him in the main line of photographers. Later on, we would hear comments from many other photographers how entertaining this individual's speech was but for the moment, all was right with the world and Mesa Arch provided us with an amazing sunrise. Conditions couldn't have been more perfect. Clear skies, pure golden light and our group in prime position, everyone walked away with some beautiful keepers for the portfolio. Following Mesa, we made a short stop to Dead Horse point where we were treated to some grand vistas. However the super early start required a few of us to seek a bit of midday rest and relaxation. Who are we kidding, all of us were ready for a bit of a powernap. 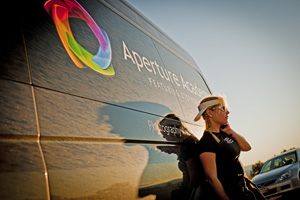 By the time we returned for our midday break, we had been up for about 7 hours. Yes, here at Aperture, we too often do more by 8 am than most people do all day. After a bout of short powernaps and some lunch, some individuals met with instructors for some impromptu equipment discussions and Photoshop instruction. However, the sun was getting lower in the sky and before you know it, we once again climbed into the Ap-Van for one final series of sunset images. The three final locations we chose ended up being perfect for the clear blue skies and slow setting sun. Utilizing grand vistas and specific alien like rock formations, we worked on metering for dramatic silhouettes, creating sunbursts, deciphering histograms, and working with a variety of filters to add impact to images. Time was also spent on finding strong compositions. Sunset was outstanding as a near full moon rose behind Balance Rock. One after another, gorgeous images began appearing on the LCD panels of the group. Conditions remained outstanding even after sunset as the rich gold hues of sunset were replaced by the softer purple and pink pastel colors of the post sunset desert. For many, this was the first time they had shot images after a sunset and the results spoke for themselves. Gorgeous, gorgeous, gorgeous.

Over the course of two days, Arches and Canyonlands had revealed many different personalities and provided us with many types of landscape images. Traditional desert stereotypes had been broken. The sheer diversity and moods encountered here is one of the prime reasons we love shooting this location so much. Couple that with a great fun-loving group and you've got the fixins (as we say in the South) for an outstanding trip. On behalf of Ellie and Scott and the rest of the Aperture staff, thanks so much for joining us. We look forward to seeing you again.

Scott, Ellie, and the rest of Team Aperture Academy