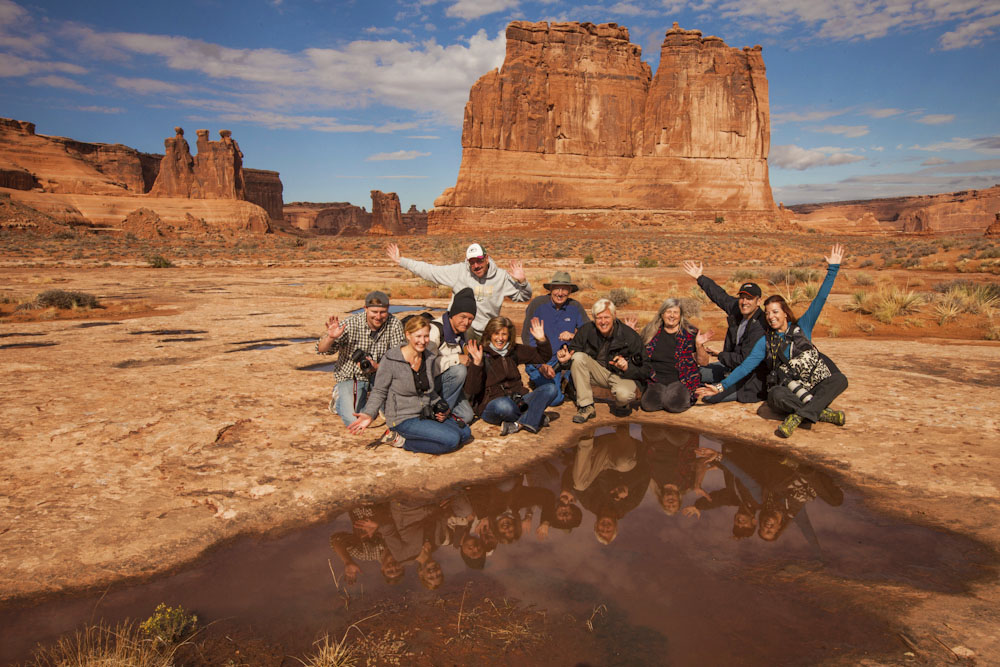 Arches National Park is unlike any other park in the world. With over 2,000 natural stone arches within its confines, coupled with rock spires, otherworldly landscapes, and exceptional desert lighting, one doesn't have to search far for remarkable subject matter. As we discovered during our traditional meet and greet wine infused orientation the evening before, for almost all of our participants, this was their first time visiting this wonderful park.

Waking before sunrise (ah, the bane of all landscape photographers), we could see that conditions were excellent as a light rain shower the previous evening had washed away the desert dust and presented us with lovely red rock formations.

For the first few hours of the morning, we worked on compositions and getting proper exposures that incorporated the enormous natural stone arches that are scattered throughout the park that gives Arches NP its namesake. It seems that wherever one looks, a rock arch of some sort can be found. Some span hundreds of feet and rise off the desert floor like giant rock suspension bridges while others are just large enough for a single person to walk through. 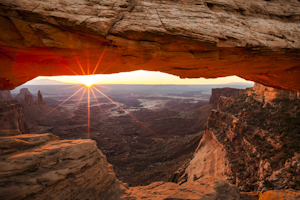 Our morning was spent working with arches of the enormous brand. Since the overcast skies afforded us a soft diffused light throughout the morning, we were able to work a variety of locations longer than if the sun had been out. On our way out, we had to stop and take advantage of what mother nature had provided us in the way of numerous reflective water ponds scattered about the desert floor. Working with the vivid reflections, something not too often seen in this dry, arid landscape, unique and original compositions were to be found at every turn. It was certainly a grand way to start our day of shooting.

Following a mid-day break, we regrouped and headed back out to Arches NP in hopes of garnering some sunset images. Conditions were looking promising. Puffy white clouds set against blue sky had replaced the earlier complete cloud cover. The sun was out. People were getting giddy. 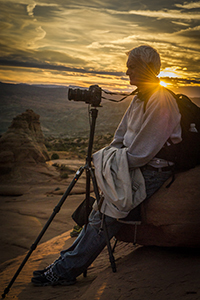 The hike out to Delicate Arch is probably the most challenging of all our destinations on this workshop. At only 3 miles roundtrip, it's not terribly far but in one direction, the route is uphill so we arrive at the trailhead with plenty of time to allow for a slow leisurely walk. The walk is worth it though as one rounds the corner and this lone rust colored arch about 70 feet tall reveals itself. The rust colored sandstone takes on a deep orange hue as the sun gets lower and lower in the sky.

Arriving early to beat the masses to this popular destination and setting up our camera comps to follow the natural contours of the landscape to the arch, all the ingredients started to come together. Speaking of ingredients, the wine, fruit and cheese platter our group shared was certainly the envy of all the other non Aperture folks that had also shown up to catch the sunset. With appetites quelled for the moment, shooting time began. 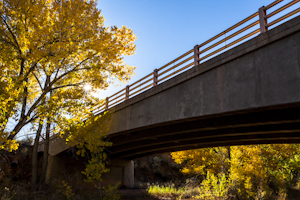 The sun broke through the thin band of clouds on the horizon in the last 30 minutes, just long enough for everyone to get some postcard perfect images. The fickle weather pattern was beginning to work out for the better now. The following day promised even better shooting conditions.

The next day began in the mega wee hours of the pre-sun morning. Thankfully, not a cloud in the sky could be seen. Mesa Arch was our destination and it's a very popular iconic photo spot. Prime photography real estate is somewhat limited there so it's critical to get our clients there early to get the best shots. We arrived with plenty of time to discuss and prepare our camera settings for the soon to be rising sun. There's a reason this is such a popular shot. As the sun crests over the horizon, it lights up the interior of the arch with a golden orange glow. Set against a near 1000 foot sheer vertical cliff coupled with rising vertical rock monuments in the distance, the scene is truly other-worldly. 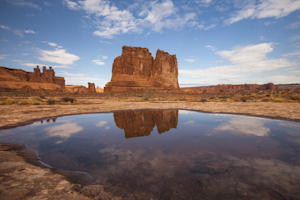 As the sunrise grew ever closer, more and more photographers began showing up. Our Aperture folks had persevered with the early wake up and as a result had staked out the prime spots. The Johnny come lately's not with our group could only plan for the next day as space was super tight. Photographic Conditions couldn't have been more perfect. Clear skies, pure golden light and our group in prime position, everyone walked away with some beautiful keepers for the portfolio. Following Mesa, we made a short stop to Dead Horse point where we were treated to some grand vistas. However the super early start required a few of us to seek a bit of midday rest and relaxation. Who are we kidding, all of us were ready for a bit of a power nap. 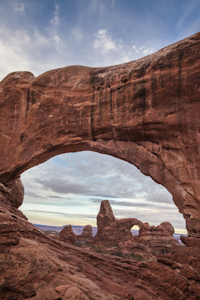 Following our final midday nap of the workshop, all were eager to head back into the field for the last of our sunset shots. The three final locations we chose ended up being perfect for the clear blue skies and the slow setting sun. Utilizing grand vistas and specific alien like rock formations, we worked on metering for dramatic silhouettes, creating sunbursts, deciphering histograms, and working with a variety of filters to add impact to images. Time was also spent on finding strong compositions

Dubbed Mt. Tallywacker for obvious reasons (for those who haven't been yet, you'll have to see for yourselves), Mount T. proved a great spot for some adventure lifestyle imagery as mountain climbers scaled this massive spire. Our cameras documented their historic accent. Sunset was outstanding as a sliver of moon rose behind Balance Rock. 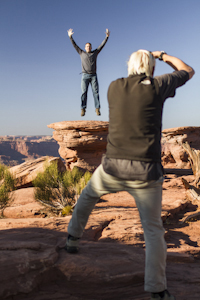 One after another, gorgeous images began appearing on the LCD panels of the group. Conditions remained outstanding even after sunset as the rich gold hues of sunset were replaced by the softer purple and pink pastel colors of the post sunset desert. For many, this was the first time they had shot images after a sunset and the results spoke for themselves. Beautiful, simply beautiful.

Over the course of two days, Arches and Canyonlands had revealed many different personalities and provided us with many types of landscape images. Traditional desert stereotypes had been broken. The sheer diversity and moods encountered here is one of the prime reasons we love shooting this location so much. Couple that with a great fun-loving group and you've got the fixins (as we say in the South) for an outstanding trip.

On behalf of Ellie and Scott and the rest of the Aperture staff, thanks so much for joining us. We look forward to seeing you again.