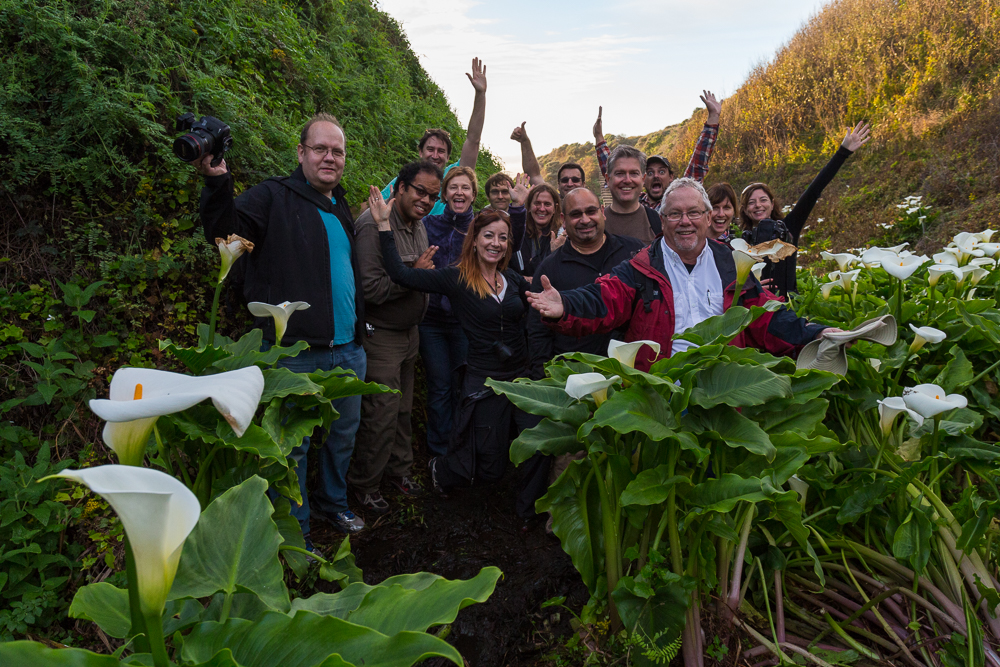 The coastal areas of California are arguably one of the most beautiful and rugged areas on Earth, filled with amazing vistas of the rocky shores and its many beaches, cliffs, coves and hidden gems. The entire coastline of California stretches 840 miles from its borders, and within those miles lies some of the most pristine natural beauty in the world. When taking that into account, where does one start to document the natural beauty therein? Thankfully most of that coastline can be accessed via California's Highway 1, which spans 655 miles of that coastline. But even then, where do you begin? Thats why the Aperture Academy has a Big Sur Coastline workshop, focusing on some of the many spots within easy reach of the bay area and its residents.

With so much to see on our beautiful coastline, fellow photographer Ellie Stone and myself hand picked 4 unique locations (and a couple "plan b's") for our workshop. We picked the spots based on the diversity of things to see along the coast and try and reflect that diversity in a way that also benefits the student, so the settings on the camera as well as the scene to be photographed will be much different and provide for a better learning experience as well as seeing some pretty amazing sights. 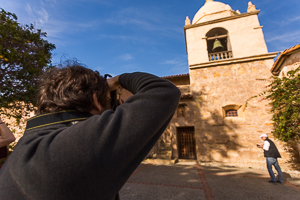 Stop one on our trip was the Carmel Mission, Mission San Carlos Borromeo de Carmelo. This Mission was the second of twenty-one built by Catholic Priests between 1769 and 1833. It is also the final resting place of Father Junipero Serra, who headed the Missions from 1770 until his death in 1784. The Carmel Mission is a beautiful example of Spanish Roman Catholic architecture that is still very well preserved to this day. For photography, the Mission provides an excellent place to work on composition and detail photography. Ellie and I, took the class around the Mission grounds and pointed out many interesting little areas for the class to not only warm up their shooting eyes, but also to work on telling a story by capturing the little things and scenes that make the Mission so beautiful and integral for preserving the history of California.

The next stop on the way down the coast was the famous Bixby Creek Bridge, one of the tallest single span concrete bridges in the world. This stop provided our class with a vista to take in the rugged beauty of the chasm of Bixby Creek, spanned by a beautiful feat of modern engineering. The vistas here are astounding from many points surrounding the bridge itself. Trails are located just about everywhere to get the best vantage point for even the pickiest of photographers. Once again Ellie and I spent time teaching about the settings used at the various vantage points around the bridge.

The next stop was Julia Pfeiffer Burns State Park, and McWay Falls. The vantage point here takes in one of only two tidefalls in the region, or a waterfall that flows continuously into the ocean. McWay falls is a definite hidden gem on the Big Sur coast, as it is not visible the road. The beauty of McWay is in the cove and aquamarine colored water that splashes against its small beach - a feature that was created by a massive landslide in 1985. Here we worked with the class on using filters for the first time, as we taught how it is possible to use a neutral density filter to block the amount of light from entering the camera, thereby allowing for much slower shutter speeds, and creating a milky effect of the tides hitting the beach.

With sunset the last priority on this workshop, we headed back north up Highway 1 to Pfeiffer Beach, home of the Keyhole Arch, however, a mudslide and accident involving a motorcycle (unrelated to the mudslide) hampered our progress and unfortunately blocked our only access to the beach. With our only route in blocked, and the inklings of a marine layer forming (which would hamper our chances at seeing a sunset on the beach) Ellie and I decided it best to head to our "plan b" spot. Which is another of many hidden gems along the Big Sur coast. This spot, right in the middle of Doud Creek, plays host to thousands of Calla Lillies every year. Our timing this year on this day, could not have been better. The small creek valley is littered with hundreds of bunches of lillies, and all with a clear view of Garrapata beach in the background. Sunset was obscured as we thought it would be (by the marine layer) but not before the skies opened up a little and provided some color to the fast growing clouds just before sunset. Many of our group got a chance to shoot the lillies and then walk with Ellie to the beach, where they captured what remained of the day with the violent crashing of the Pacific Ocean against the many sea stacks along the coast.

Scott, Ellie and the rest of the Aperture Academy.