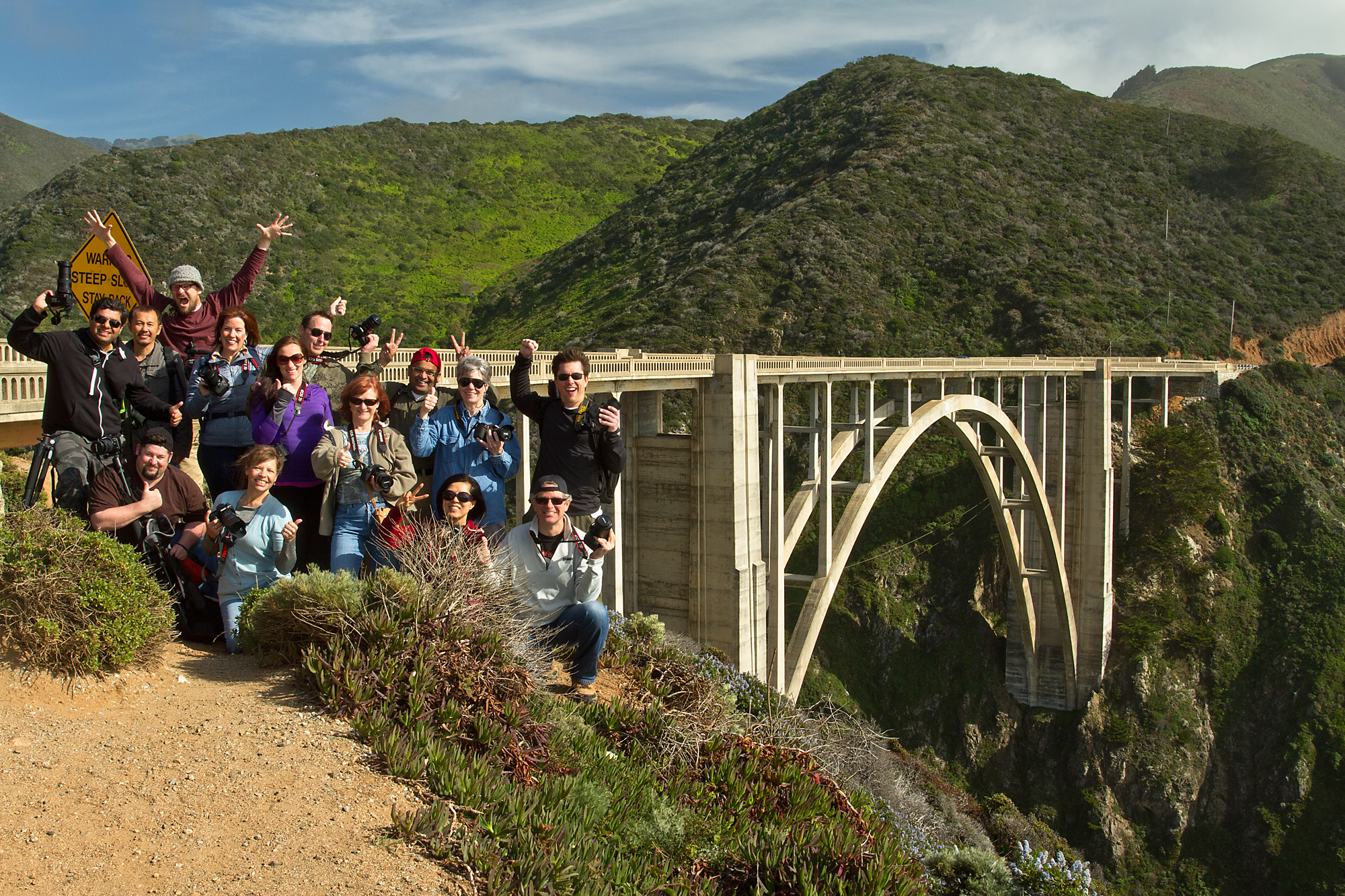 The Big Sur Coastline ALWAYS impresses me. Every time I see it I literally find three new spots that look like fun to photograph...plus all the already wonderful iconic locations. It's one of my favorite spots to show classes. We typically focus on the really great and iconic locations, but those spots offer so much in the way of beauty and educational opportunity that it's perfect for a day out.

This class was a super mix of returning students and new faces. I love to meet new people, but I love seeing the old friends as well...such a great time!

The first place we stop is the Carmel Mission. This old mission is a lot of fun to photograph, and it's fun for me to teach here because often times people are so overwhelmed with the big picture here that they don't stop to see some of the wonderful small photographs waiting to be discovered.

Jean and I work with the students here as much on composition as we do with settings. A lot of what we teach setting wise is to use smaller apertures, and faster shutter speeds as it's usually easier to shoot hand-held in a lot of places so you can really get a perfect composition in some tight areas.

We spent a lot of time photographing the ripples in the coin fountain. I showed the class that if you used live view, cranked up the ISO a bit, used a low aperture (f4) and high shutter speed you could get some really cool abstract type shots of the water ripples and coins in the fountain...not many people really pay attention to that kind of thing so it's fun to show the class some different ways of seeing. 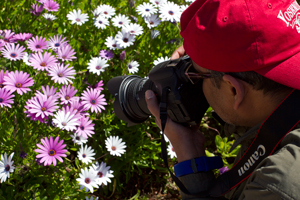 We also shot a lot of flowers using the repetitive shapes and color tones. Sometimes we break up the scene with finding a patch of purple flowers with only one white flower, then making compositions that utilize that contrast as the main aesthetic.

I saw some great shots of the cork-oak on a few cameras; students using the lines of the branches and wonderful textures in the bark. Great shots of the different cacti were noticed by Jean and me too! There were so many different places to shoot here, it was hard to get everyone to pack up and go see the Big Sur coast!

We made a brief stop while down the coast to see the famous Bixby Bridge. I saw some really nice images of the bridge with the nice blue sky and white clouds (good spot for polarizers) and people made great use of some of the nice purple flowering bushes in the area to act as foreground, and also cover some of the unsightly wires near the base of the bridge.

We also did a nice group shot here...always fun to take a group shot near a sign with a danger steep cliff warning on it. 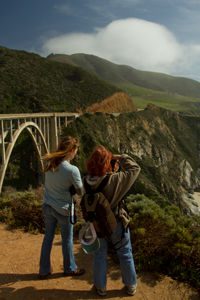 McWay Falls was our farthest southern destination. Everyone unloaded from the van and we walked out to the boardwalk across from this iconic pocket waterfall, and began to shoot. This spot is almost tropical in feel; bright blue water, white sand, and a perfect waterfall falling over the edge of the cliffs onto the beach. There's even a palm tree in the area to help the tropical vibe! 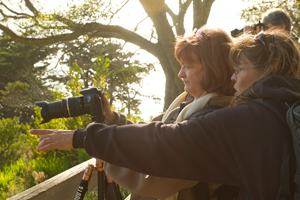 Jean and I walked up and down the boardwalk to help the class with the polarizers, camera settings, and using the graduated neutral density filters for balancing out the images...the sun was dropping on the horizon and the sky was really bright. Those filters were necessary to give everyone a balanced exposure. The polarizers really helped cut the glare on the water too so that nice blue could really be seen on the horizon.

Some member of the class made it all the way to the end of the boardwalk and took some nice close up shots of the rugged Big Sur coastline moving up towards Monterey. The light was really nice at this time of day too...slightly obscured by some cloud cover, it made some soft shadows and lines on the craggy cliff sides.

The final stop of our tour was Pfieffer Beach. I love this beach with its beautifully sculpted sandstone seat arches and outcroppings. It's such a fun place to make photographs...the only issue was that mother nature decided to throw us a wind tunnel to shoot in. MAN, I haven't ever seen it this windy here in my life. I thought Jean was going to blow away! Everyone hunkered down and trudged out to the beach, battling the entire way. Once we got to the hole in the rock, we made a line, and everyone set up to shoot. Despite the wind there were some great clouds and warm tones in the sky. We helped the class to compose some of the more traditional shots of the hole in the rock, with slow moving water in the foreground, as well as some wider angle images with the whole rock structure and sky included. Everyone got some really nice shots, and stuck it out really well in tough conditions. I think it was worth it too based on the images I saw on the backs of the camera. 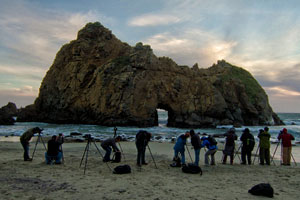 What a tough bunch of photographers we had...driving wind, and no open restrooms! It was as difficult a shoot as we could find and everyone did amazingly well too, which made it all the more fun for us as instructors!

Once the light had faded we all happily returned to the van to make the drive back to Carmel and bid our farewells. Although many people had nice new hairdos' thanks to the wind, everyone still had a smile on their face and a memory card full of images to take home and process. Well done everyone!

Brian, Jean, and the rest of the Aperture Academy Team