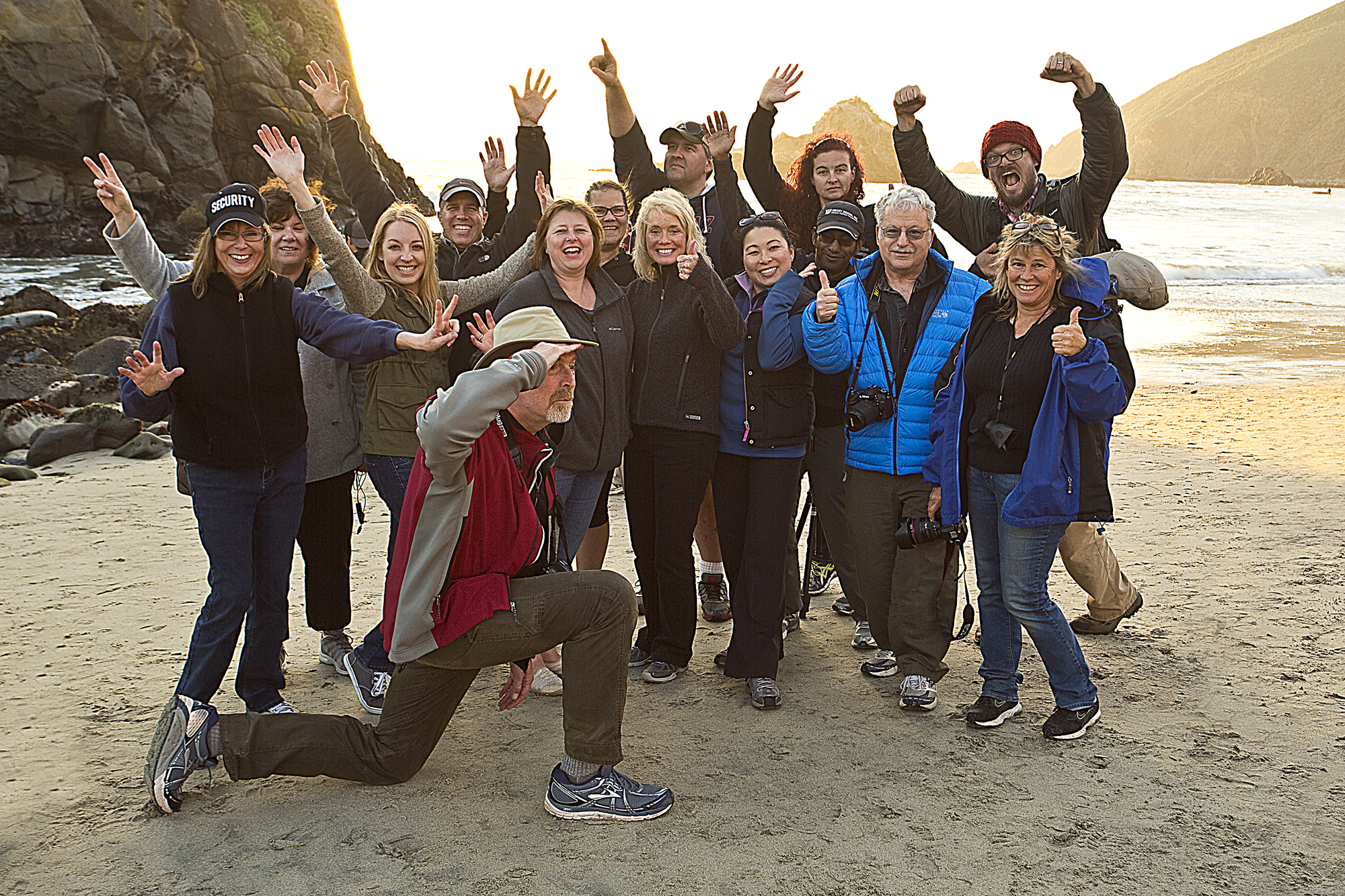 While the much of the northeast and midwest is still shoveling snow, its springtime on California's central Pacific coast, with wildflowers blooming, the greenest hills outside of Ireland and rich supple light as the sun makes its way back towards the north. Today was one of those beautiful days greeting Aperture Academy students with pro photo instructors Brian Rueb and Paul Porter for one of our most popular workshops, stretching from lovely Carmel-by-the-Sea down the coast to some favorite Big Sur locations.

One of the most important parts of the day, our Carmel orientation provided the opportunity for Brian and Paul to talk about the days goals and to spend a little time getting to know each another a little, with students disclosing the technical or creative aspects they want to work on during the day. Comfortable working with people from all levels of experience, we had people at all levels of experience for our day on the coast. Yearning to take more control of their cameras, we emphasized working in manual modes, getting familiar with the balance between aperture, shutter speed and ISO. After reviewing the days itinerary we jumped in the Aperture Academy van for our first destination.

Founded by Don Gaspar de Portola and Father Junipero Serra in 1770, San San Carlos Borromeo de Carmelo Mission (Carmel Mission) is the culmination of a 1768 land and sea expedition by Fr. Serra and his missionaries accompanied by Don Portola and his soldiers. While a busy successful mission until the 1830's, it eventually lapsed into disrepair through neglect and vandalism. Once California became a US Territory, the government returned the Mission to the Catholic Church in 1859. In ruins for many years afterwards, its restoration started in 1884, and continues to this day. Sir Harry Downie was put in charge of the project in 1933 to gradually renew the original luster and beauty of the mission compound, including its catenary ceilings, thirty foot reredos and 5 foot think walls. As we worked our way through this beautifully restored mission compound, we worked with the students to get them set with basic manual camera settings, starting with white balance and scene composition and then drilling them through exposure settings of aperture, shutter speed and ISO, while emphasizing the use of their mid-range zooms. It was encouraging to see many of the students break out on their own, looking for some photo magic, while Brian and Paul circulated, answering questions about tricky exposure balancing and fun teaching moments. As we finished up at the Mission, some students were starting to understand how exposure settings are related. 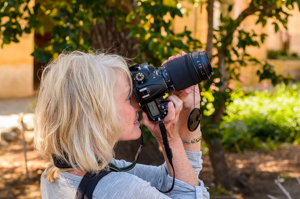 Dragged north along with the Pacific Plate some 29 million years ago from what is now Mexico, Big Sur boasts perhaps the most striking stretch of Pacific coastline in the Untied States. Coastal mountains leap immediately from the shore, soaring above the ocean, some to over 5000 feet in the Santa Lucia range. As these peaks tumble to the Pacific, the combination of tough, hard-to-erode rocks and rapid tectonic uplift has turned Big Sur into one of the most strikingly dramatic coastlines in the world, much of which seems to glow from cerulean waters mixed with its dramatic surf. It’s so hard not to to stop at dozens of places along the coast, as Brian and Paul noted locations for our eager students to come back to. While we snaked down Highway 1, everyone was anticipating the coming shoots of the day.

This gorgeous day continued as we reached our next iconic destination. One of many ambitious large engineering projects of the thirties, Bixby Creek Bridge was engineered by engineer C.H. Purcell and bridge engineer and designer F.W. Panhorst and spans a graceful 714 feet at an airy 280 feet above Bixby Creek and the beach below. Once called the Rainbow Bridge, construction of it's soaring arch was finished in a little over a year. With the bright skies and surf's reflections below and marine mists licking the hills above, it was the perfect opportunity to work with students on the use of polarizers and neutral density (ND) filters on their wide-angel lenses. Taking in various scenes we again worked with students about approaching their desired compositions, then setting their aperture and shutter speed. So much fun the time was flying by and it was time to rally students back to the van, heading further down the coast to one of Big Sur's most beautiful locations. 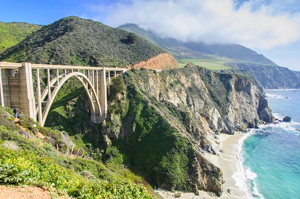 Once in a while, we humans are treated to geological events which define the shape of our world. These events can be both dramatically beautiful and equally terrible, perhaps a treat to witness or enjoy the outcome of, as long it we don't ourselves get caught up in the actual physical drama of the event. One of these huge events took place along the Big Sur coast, in Julia Pfeiffer Burns State Park in 1983, as many millions of cubic yards of hillside tumbled down on Highway 1. It took almost a year for engineers to shove all that debris down the cliff and into the sea to stabilize and repair the highway. In response to this extra debris on the beach below, the Pacific’s wave action redistributed some of that debris as sand into nearby coves which previously had none. One of the outcomes of these complimentary events is perhaps the most picturesque cove graced with that new sand; the cove at McWay Falls.

McWay Falls adorns the new sands with a bit of angel hair leaping from a hanging valley over this reshaped cove. It known as one of only two California waterfalls that leap directly to the sea, and one of only a few in the world. With a thin overcast developing, conditions for the right exposure became a little more challenging. The glare of the sun from the ocean necessitated polarizers, while the brightly diffused light from the thin clouds above demanded ND filters to darken the skies a bit while allowing for a perfectly exposed foreground. The trail and catwalks that hug the north edge of the cove provide a perfect place for numerous compositions, wide angles to take it all in and medium zooms to fill the frame with McWay’s thin silver veil as it spreads gracefully across the sands below. Some of our students, never having had an opportunity to shoot the Big Sure coastline were delighted to have been able to capture this jewel of the central coast. With our sunset shooting location waiting, it was soon time to head back north along the coast for a special place that delights photographers and beach goers alike; The Hole in the Rock at Pfeiffer Beach. 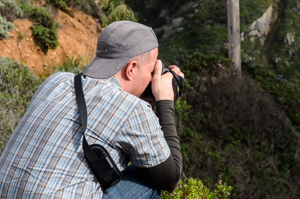 A few miles north of McWay Falls, Pfeiffer Beach lies at the base of Sycamore Creek, a gorgeous forested canyon leading to the Iconic Hole in the Rock, a wide roughly hewn sea mount that at the lowest tides might be considered to be part of the beach instead of rising from the ocean floor just off the coast. Its a little like nature’s Stonehenge, with a unique tunnel eroded though the center of it base, through which the winter solstice sunset aligns almost perfectly to generate a beam of liquid orange light illuminating the breaking surf accelerating through the tunnel and crashing on the rocks beyond. In March, the sun path is not quite as direct as during solstice, but it does manage to kiss the surf a bit as rushes through the hole. As the sun dipped to the west and the light faded, we worked on the magic of longer exposures to slow the movement of the water, which ironically makes it look in motion in a nicely crafted image. Helping students with compositional variations, many were delighted they were learning how to capture the dynamic motion of the ocean as it rushed through the tunnel, releasing their shutters at just the right moment. As the sun set, Brian noticed some color in the clouds to the south and we gathered the students for one last shot of the adjoining cove and the soft pastel hues above.

Its hard to leave when your having so much fun, but it was time to conclude a gorgeous day’s shooting and learning. Piling back into the ApCab we rode back to Carmel as evening descended upon Big Sur while students quietly reviewed the day and chimped photos on there LCD’s. It was such a pleasure working with the students on this workshop and hope to see you all again soon. Remember, the learning doesn’t stop at the end of the workshop. Brian and I look forward to hearing from you as your photography questions arise, whether creative or technical.

Until Next Time, Brian, Paul and the rest of the Aperture Academy Team