The Eastern Sierra spans a narrow pocket in between the Sierra Nevada Mountains and the Great Basin of Nevada. In this small pocket, are nestled some of the most beautiful alpine valleys in the United States. Interesting geological features are abundant in this area including Death Valley, Yosemite, Sequoia, and Kings Canyon National Parks, John Muir and Ansel Adams Wilderness, The Alabama Hills, The Ancient Bristlecones of the White Mountains, The Mono Lake Basin, and much more. With so much to see, its hard to narrow down an area to focus on. So the Aperture Academy actually has two Eastern Sierra Workshops, although we could probably do more with the abundance of scenery! This particular class is focused on the Northern parts of the Eastern Sierra, including major sites like Mono Lake and Bodie Ghost Town. With fellow photographer and pro-instructor Ajay Fay, we met a smaller group of intrepid photographers eager to explore the vast wilderness that is the Eastern Sierra.

We started off a little differently this year by going to Convict Lake on our first morning. The Eastern Sierra is full of alpine lakes which at their best display a serene reflection of the high sierra mountains above. Convict lake was no different this morning, and the drama that is unique to Convict is that the mountains that frame this little fishing lake are arranged in such a way to reflect the orange morning sunlight back into the calm waters below, providing a beautiful plethora of colors. There are many vantage points to explore and Ajay and myself spent time with our group showing them all the different possibilities for capturing this awesome location. 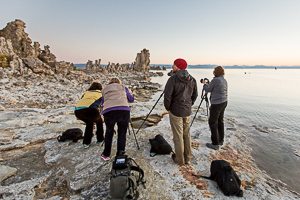 After sunrise, once the light became unfavorable to shoot, we headed back to the hotel for some rest, and some food before our big adventure of the day, Bodie. The ghost town of Bodie, CA, is situated in a small valley just north of mono lake. Gold was discovered there in the 1860's and shortly thereafter tens of thousands flocked to the gold hills that flanked the town. After a many misfortunes in its history, the gold dried up, and it became too expensive to maintain the mines, and by WWII, almost all of the residents had left. Despite the two major fires in its history, Bodie is one of the best preserved historical ghost towns in existence today. And we planned the entire afternoon to allow our group to explore the many square miles of its abandoned buildings, landmarks, and state of "arrested decay." Its amazing what you can find in Bodie, if you look hard enough. For nearly everyone, one visit just isnt enough to see everything, let alone photograph it. Ajay and I let the group loose, and they wandered the town photographing at will, then we spent time finding everyone and helped them to find interesting compositions and work on techniques, as well as pointing out our favorite spots. 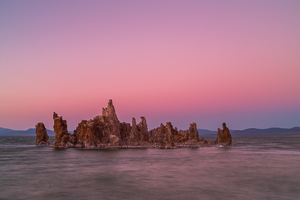 After about four hours in town, we headed back to the hotel to allow for a quick meal and headed back out to the South Lake Tufa area of Mono Lake. The tufas are these exceptionally weird calcium carbonate formations, much like stalagmites in a cave. They formed over hundreds of thousands of years from underwater springs depositing the carbonate minerals in large columns. When waters from the area were diverted from the Mono Basin in the early 20th century, the receding shoreline began to uncover the tufas. This place is notoriously challenging for photographers, the water levels can change every year, and tufa formations are extremely fragile, making it difficult to walk around safely without touching or stepping on them. We spent the evening shooting the most well known formation, an isolated island of tufas just 30 yards offshore. Even though the sky was bare, the glow at sunset is almost always pink in color, and makes for the perfect backdrop.

We were able to wake up a little later today, as the drive back to the tufas was much shorter then the drive to convict lake. Now that everyone had an idea of what to expect, from shooting the tufas last night, it made it a little easier to find formations along the coast to catch interest. Again the sky was bare, but we made the best of finding interesting things to photograph, and spent the remainder of the morning near the shores. 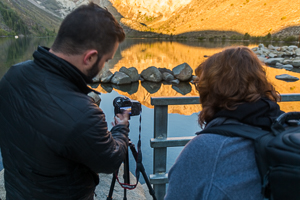 We headed back to the hotel for a brief stop for coffee before heading north to Lundy lake. Lundy lake is another one of the many alpine sierra lakes whose waters are crystal clear, and and on a good day, incredibly flat. Since we had some extra time, Ajay and I helped the group try out a technique thats becoming more and more popular with photographers during midday, long exposure photography using filters. One of the best filters for this technique is a 10-stop ND (neutral density) filter. Its so dark, that when placed in front of the lens, fools the camera into thinking that the scene is 10x darker than normal, allowing for MUCH longer exposures. This allows you to shoot way longer to do things like flatten out ripples in water, streak fast moving clouds, remove people, and more! We spent a fair bit of time allowing everyone to a chance at "seeing" what would happen with this technique before calling it quits for the remainder of midday. 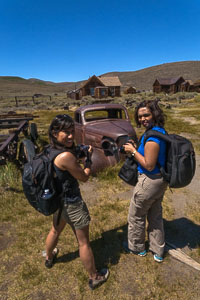 Just before we headed out for our final shoot of the evening, and the weekend, we had some time allotted for image review and post processing. Ajay and I sat with our group and explained how we would process some of the images from the weekend using techniques in Photoshop and Lightroom. Since not everyone travels with a laptop, we made sure to do an image review with everyone present and give feedback and ideas on composition, and techniques for processing and such.

We then headed out to Olmsted Point, about a quarter of the way up Tioga Pass. Olmsted Point is the premiere spot to catch a glimpse of Half Dome for sunset. The way the light falls of the sheer cliffs at sunset is nothing short of breathtaking. Especially since we are sitting atop a granite escarpment overlooking Tenaya Canyon. Looking the opposite direction from Half Dome, you have beautiful views of Tenaya Lake and the surrounding granite peaks. As sunset came, the last light on the western facing cliff of Half Dome illuminates a beautiful glowing orange, and then descends into darkness. A great end to a wonderful workshop!

Scott, Ajay and the rest of the Aperture Academy team