"Just tell us the bad news, what time do we have to meet?" That's one of the first things we hear from our returning students at every Aperture Academy workshop. Even though it sounds bad, it means that we're doing our job and getting our students to the right places at the right times to have opportunities to capture some of nature's most beautiful and in this case, bizarre locations.

Mono Lake is another world. Towering pillars of tufa texture rise out of the lake, built from years of movement from underground springs and the mineral deposits they leave behind. Walking through the maze of these structures leaves one feeling as if they've been transported to an alien planet. It's one of the reasons the students signed up for our Eastern Sierra, Bodie, and Mono Lake workshop.

Saturday morning after a short nights' sleep our group of 12 eager photographers met (on time) in Lee Vining California for a ride in the luxurious ApCab to this alien planet. Instructors Brian Rueb and Ellie Stone met the sleepy group and got them motivated for a morning of photography. We arrive on the scene just as the light was beginning to show the color of what looked to be a tremendous sunrise. Ellie and Brian helped the group navigate the tufa maze and look for interesting compositions. The instructors worked on the use of filters such as a graduated neutral density filter and polarizer to help get the most of the scene. For the newer students there was a chance to really start with the basics and deal with questions concerning aperture and shutter speed. The sunrise went off as hoped, and the class came away with some amazing images of this Tuf-tastic landscape. 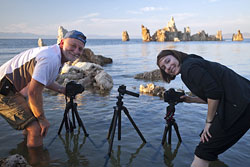 The morning wasn't finished though, the clouds were perfect and the wind was minimal which meant there was a chance to go grab some more images at the nearby Lundy Lake. Lundy Lake is one of the many gorgeous lakes on the 395 side of the Eastern Sierra. Lined with granite peaks of many different shades and colors, this lake is a indigo blue gem waiting for cameras to capture it. The reflection was perfect and the students loved the chance to peruse the shoreline in search of interesting rocks to use in their foreground to make the compositions stronger. Brian and Ellie helped to point out minor tweaks to compositions as well as help with settings, and reminders to use the polarizer as a tool to help bring in the reflection or cut it slightly to reveal the underwater rocks.

With the lake in our rearview it was time for a much needed morning break before heading to 10000 feet in the Eastern Sierra to Tioga Lake and Ellery Lake. The wind rose in the afternoon, but the clouds remained, and even though the the nice reflections of the morning shoot were gone, it was still an opportunity to learn about composition, and practice using a solid neutral density filter for those who had them. Even when the conditions aren't optimal there is always a chance to practice "what if" moments where you plan for how you would shoot a scene IF the conditions were perfect, so that when the opportunity arises in the future you're not fumbling with gear as much.

The evening was spent back at Mono Lake working on compositions and improving upon what the class had gone over during the morning session. Realizing that many of the compositions require students to be closer to their subject, many students lost the shoes and socks, rolled up the pant legs, and got right in the lake to get a closer and more interesting composition. When the sunset began to fade, a full moon rose over the tufa and gave the students yet one more opportunity for capturing some of the magic the eastern sierra had to offer. When the show ended, it was time to put the shoes back on, and take our wet class back to the hotel for another short night of sleep before setting out in the morning for some more great light in the Eastern Sierra. 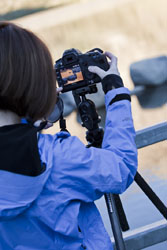 Convict Lake was named for a wild west show down between law enforcers and criminals on the run, while we had a rascally bunch of students all were in good standing with the law, and just retreating to Convict Lake for some gorgeous light, and perfect reflection. The class again arrived on scene before the light, and set up camp around the lakes eastern edge where the boulders and submerged stone made for interesting foreground to balance the composition. The High granite peaks took the morning sun and began to glow in a swath of golden light that blended so nice with the deep blues of the sky and lake. Complimentary colors work well in compositions, and even when the sky refuses to put clouds in our images sometimes the simplicity of line and color can make aesthetic images that make viewers mouths drop.

We had a long day in store at the Bodie Ghost town, so Convict Lake was our only stop of the morning. The class had been up before dawn two days in a row and a nice breakfast and nap were much needed before heading out to the Wild West settlement of Bodie to photograph pieces of American history as it was left nearly 75 years earlier.

Bodie was a thriving mining town in the early 1900s. Full of saloons, and brothels Bodie was a stereotypical western movie set for many years until the gold dried up and much of the town was destroyed by fire. IN the 1930s most of the townsfolk had up and left for the bigger cities of Reno and Carson City and the town of Bodie was left ‘as is' to decay in the harsh desert climate. The state park system took over some time later and now Bodie is a photographers' playground. For macro photography and detail work there are few places better than Bodie. The class was turned loose for 4 hours, to explore and find their own little slices of gold. Brian and Ellie walked the premises like gunslinger looking for students who needed a shot up with education on composition or camera settings that dealt with more shallow apertures to emphasize detail (as opposed to the high aperture images we normally work with on landscapes)

When the time in Bodie had ended, it looked like the end of a gunfight. The class had fired off round after round, but in the end Bodie was overwhelming and many students slept on the ride back to Lee Vining. It remains to be seen on the screen of the students at home whether they feel like they won their showdown at Bodie. The images that Brian and Ellie saw in the screens of the students look like our posse may have shown up and left with the upper hand.

Many students felt good about the images they'd captured at Mono Lake the previous day and after a long afternoon of photography they opted to head out and get a start on the drives back to their homes. Our remaining diehards, after some group discussion opted to try a different location and follow some of our early departures up to Olmstead Point in Yosemite National Park. The clouds and conditions at Mono were looking less than desirable, so an impromptu change in schedule was much appreciated and the class found themselves a short while later sitting on the edge of a granite wonderland looking at the monolith half-dome as it reflected the golden light of sunset. The light of this evening was intensified by some local forest fires, and the sky had a very nice warm glow to it that made photography very fun. It also gave the instructors a chance to show students how using a larger lens can help give a new perspective on landscape photography. Students worked on tight compositions of half-dome and the surrounding granite slopes as well as larger, wider scenes that used some of the cracks and grooves in the granite shelf we had set up. It was an unplanned and beautiful way to end a wonderful weekend in the range of light. The mosquitos eventually came out and chased our class back to the safety of the ApCab for our drive back to Lee Vining. Only a near blunt force trauma incident with Bambi separated us from the end of our workshop.

Back at the hotel the remaining students departed for their hotel rooms, or their vehicles for a drive home where mounds of unprocessed images awaited them to go with the memories and fun they'd had during their weekend with the Aperture Academy.