Costa Rica is an unassuming little paradise tucked neatly in between Nicaragua and Panama in the southern end of central america. They are known for many things, most notably coffee, but Costa Rica is now also becoming a haven for eco-tourism. Costa Rica currently protects nearly 28% of its landmass, with 27 national parks, 58 wildlife refuges, and 32 protected zones. These areas hold 5% of the worlds biodiversity, helping to make Costa Rica a living Eden. Its no wonder why we host photographic workshops there. There's so much to shoot! From hummingbirds, to crocodiles, rain-forests to volcanoes, and everything in between, Costa Rica is an adventure through and through. Heres a little story about our most recent trip:

Day One: In the Garden of Eden

Upon arrival in San Jose, our individual guests were picked up and driven to our first hotel for a little R&R before our main adventure began. The Hotel Bouganvillea in San Jose is a sprawling complex of immaculate gardens hosting a variety of local flora and fauna. With our rooms available early, our troupe checked in and had the day to recover from the flights that brought them. I personally took the better part of the day to take a much needed nap, before exploring the grounds myself to see what birds were calling the gardens home that week. In the evening we met up with our guides for the trip, Charlie and Niño. These guys are fantastic guides who know everything you could possibly imagine about birds, plants and animals. We had a lovely dinner with them where we reconnected and went over our itinerary for next action packed week.

Day Two: To the Mountains

Since our group was pretty familiar with their cameras and the grounds of the Bouganvillea, we decided to leave early and take a different route through the mountains to our next stop in Bosque de Paz. The forest of peace, as is directly translated, is a huge private reserve nestled in the mountains just south of the National Park Juan Castro Blanco. Before we arrived the detour we took landed us at little stop in the mountains overlooking a river gorge, where many species of hummingbirds, parakeets and other birds were abound. We even got some up and close pictures with a very friendly parakeet! After that we headed to the reserve of Bosque de Paz, where we spend the next two nights. What a place this is! The forest is in a higher elevation, so the temperature is quite cool - for the rainforest - and the accommodations are surrounded by hummingbirds! We spent the rest of the afternoon photographing these beautiful fast flying creatures, before having a wonderful home-cooked meal and turning in for the night. 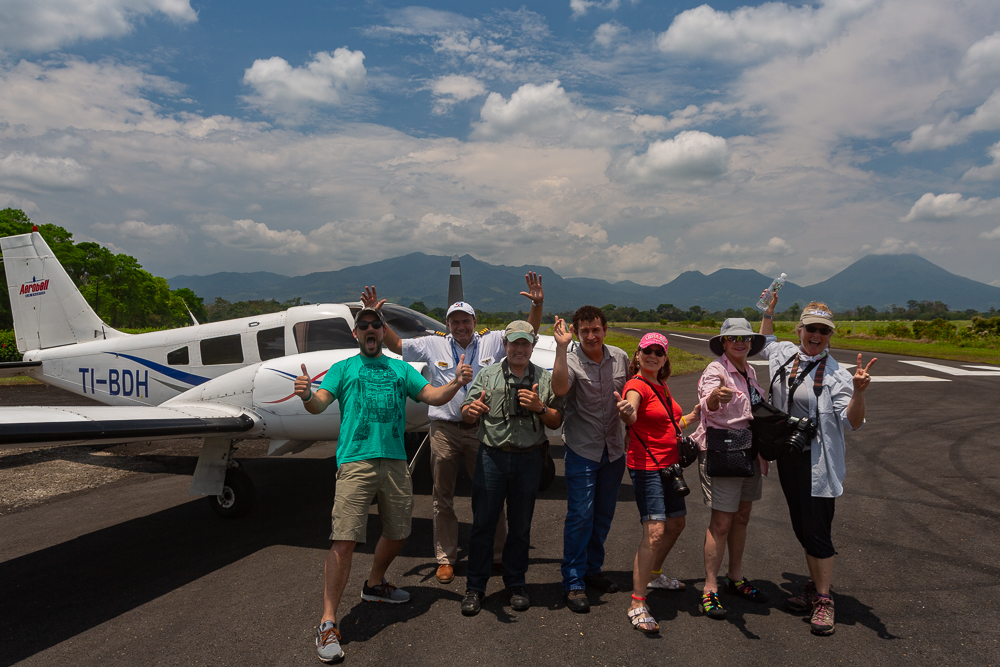 We woke up early today and took and short hike into the woods in search of one of the most beautiful birds Ive ever seen; the resplendent quetzal. After a little bit coaxing with bird calls, we even managed to find a couple! The light was not particularly great, but everyone was able to pop off a few shots of this very elusive bird before took off for greener pastures. We left our hotel after that and traveled to a local waterfall; Catarata Del Toro, a 270 foot waterfall which is the largest in Costa Rica. The grounds there cater to even more different species of hummingbirds, and we spent the rest of the morning waiting for the clouds to come in for better light on the waterfall. After everyone got their fill, we headed back to Bosque de Paz for lunch, and spent the rest of the afternoon setting up the feeders and honing our skills capturing the hummingbirds. 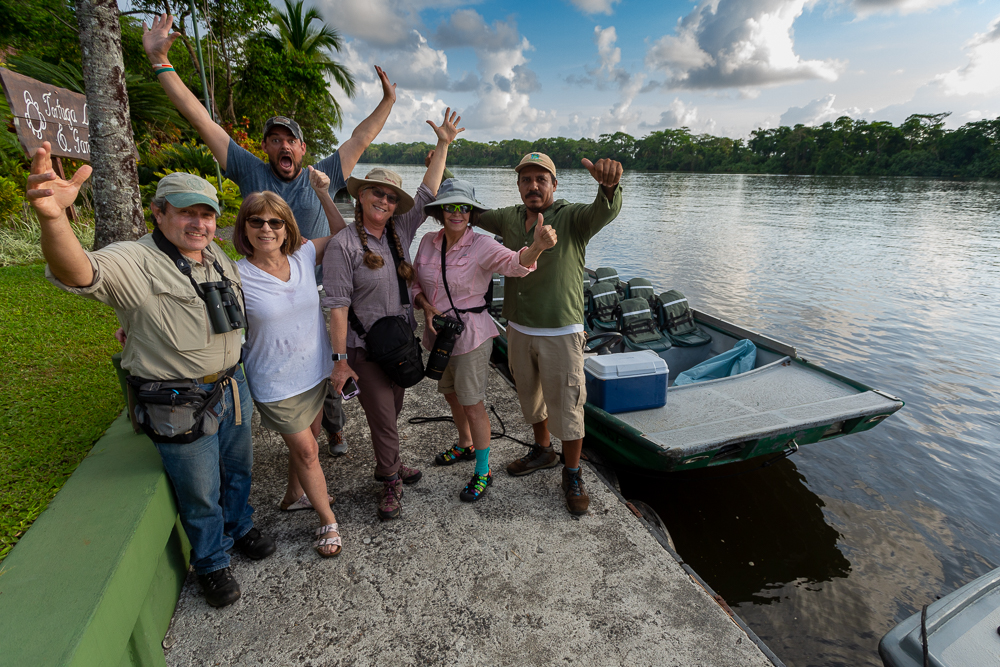 After two days spent mastering our shots with hummingbirds, we left the cool high climate of Bosque, and descended into lower country to greet Costa Rica's most famous volcano, Arenal. We made a pit stop in the little town of La Fortuna for some shopping and a coffee tour with Matias Zeledon of Down to Earth Coffee. He talked with us about Costa Rica's rich coffee history, and we got some insights on how coffee is harvested and roasted before sampling his amazing crop and buying a few pounds ourselves (the coffee liqueur is to die for by the way). With our shopping bags full of goodies and amazing Costa Rican coffee in hand, we headed to our accommodations at the Arenal Observatory Lodge. After a lunch beside the deck overlooking the volcano, which was in full view, we checked into our rooms and took in the full splendor of Arenal from our decks. At sunset we convened on the observatories deck to shoot, and had a lovely dinner and drinks before retiring for the night.

Day Five: Ever Been Surrounded by Butterflies?

This morning we woke up early again to photograph birds on the observation deck at the hotel. The lodge has probably the best vantage point of the volcano for miles around, and the deck is purposefully positioned at the tree line to take the best possible shots of the birds as they swop in for a morning meal of fruit. After breakfast we went for a small hike to the Danta waterfall and caught a northern tamandua, or white anteater sleeping in the trees above the trail. We spent a few minutes shooting him while calling some trogons (colorful birds) and had a wonderful time filling our cards with all the action. After the waterfall, we hopped in the van and took a short drive to the Butterfly Conservatory. This is one of the most fascinating experiences Ive ever had. Once we entered the purpose-built biomes, hundreds of butterflies of all different species fly around you in a tornado of activity. As we made our way from one biome to the another, we were greeted by new species even more fantastic than the last. It was such a treat being able to interact and photograph these special creatures. In the afternoon, thunderstorms came in and showered the area with torrential downpour which cancelled our hike, so we spent the time out on our balconies shooting the hummingbirds flying around in the rain. 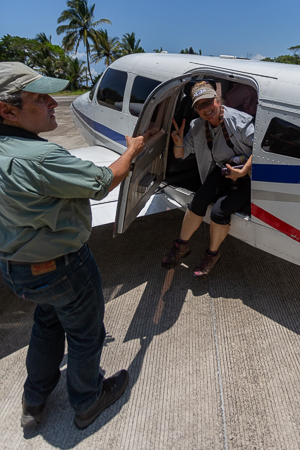 Day Six: Lets Charter a Flight to the Coast

After an amazing sunrise on the deck of the Observatory Lodge, we stuffed ourselves full of breakfast and hopped the van said goodbye to Arenal. From the town of La Fortuna, we chartered a flight across the country and into the dense jungle of Tortuguero, on the Caribbean coast. The small plane provided the best views of the Costa Rican countryside, and we snapped away on our phones and cameras for the duration of the flight. Tortuguero is an amazing place, which we save for last, for good reason; its paradise! We land on a small strip surrounded by water, the Rio Tortuguero on one side, and the Caribbean Sea on the other. We walked over to the beach and checked out the surf before getting into a boat to cross the 100 yard channel to our resort. The Tortuga Lodge is legendary. The food is amazing, and in the afternoon we took another boat ride into the park and had another time photographing all sorts of things. Monkeys, birds, reptiles, you name it. The trip in Tortuguero is basically one big river safari. We get to sit back, relax and point our cameras up at anything we see.

Day Seven: We Should Get in this Boat all Day

Todays activities consisted of boats, boats and more boats. If you have ever been to Africa and taken a safari, this ain't too far off, just replace the safari vehicle with a boat and you've basically got the same thing. We spent the morning and afternoon driving up and down the Rio Tortuguero and its many streams and canals, under the captaincy of Paco, our driver and Charlie our naturalist. We saw three types of monkeys, spent about an hour with a family of capuchins, photographed water birds in flight, saw scarlet macaws fly overhead, got real close to a cayman who didn't like our presence and bolted, and took thousands of pictures between breakfast and dinner. And after it was all done, we had a special evening barbecue prepared for us with chicken, steak and shrimp. The wine was poured, and the candles lit for our last night in this awesome and very special place. 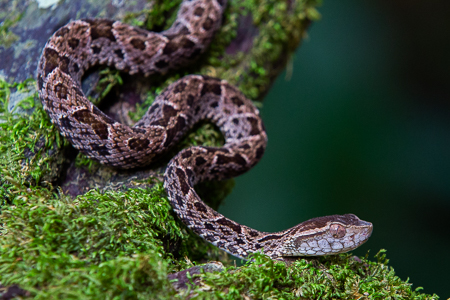 Day Eight: Is that Snake Poisonous?

Instead of leaving Tortuguero by a flight, we'd thought it'd be fun to take one last boat ride to say farewell. So we packed up our belongings and headed back west on a river, where we would rendezvous with Niño. The boat ride took a little over an hour, and we were able to stop and shoot some crocs and caymans and other things on the river banks. Once we met up with Ninõ, we drove to a spot where a local man had been receiving photographers for the last couple of years. Near his village, he had found that rare owls were perching in the trees, so we went into the woods and looked for them. We found them! I've never seen an owl in Costa Rica before so it was pretty amazing seeing as how they look so different from owls in the states. After getting some shots of the owls, and some even better shots of motmot, we headed back this mans house where we were able to spend the next hour or so photographing some of the more poisonous members of the ecosystem. We got up close and personal with a poison dart frog, and a fer-de-lance, along with some other reptiles and birds that had there. We even got to see a sloth up close and personal! We an authentic lunch nearby and drove back to San Jose where we had started, at he Hotel Bouganvillea. After a short nap, we met for drinks where we mused about the last week, had a wonderful dinner with our new friends and said our goodbyes over dessert. 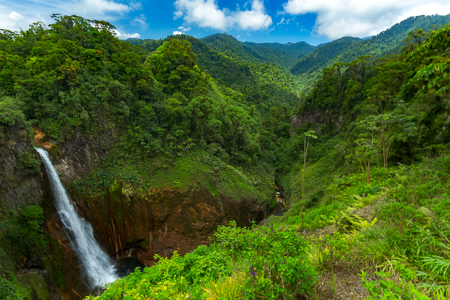 I hate leaving this wonderful place. Costa Rica is so rich with experiences, the people are fantastic, the wildlife and scenery are to die for, and the camaraderie of the groups is why I keep coming back. To be able to share this place with people is what makes it special to me. Looking over the thousands of images of birds and reptiles and flowers and insects, its gonna be a chore to pick out the best ones because theres so many to choose from. The weather was extremely favorable, we saw new things, and most important of all, had a great adventure! I hope we keep getting to share this place with new people for years to come. Pura Vida!

Scott and the rest of the Aperture Academy team!