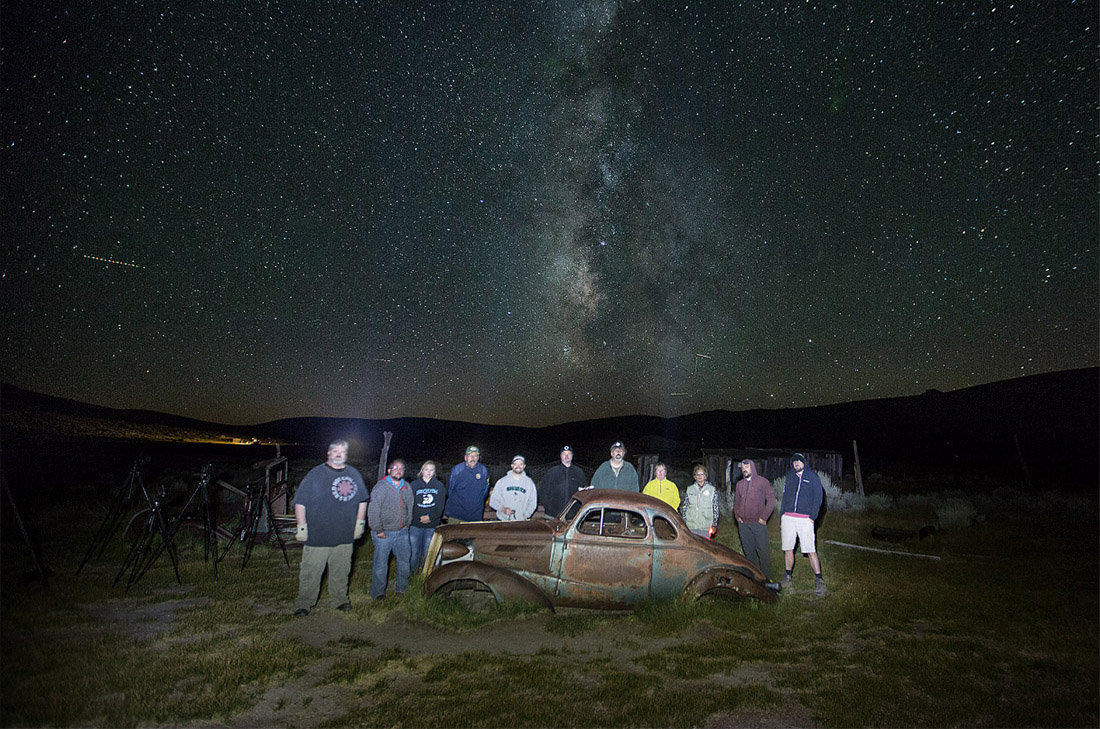 Night photography is all the rage these days. With the advances in technology and the ability of cameras to really capture what we see in the night sky...it's not surprising. We've been really pushing our night sky offerings, and we were really glad when we were finally able to offer our first Bodie-at-night class.

The Dark Side in Bodie class allows a small group of folks the chance to have the whole 1800's ghost town to themselves from 6pm until 1am. WHAT AN OPPORTUNITY!

Without the hordes of tourists walking around it was easy to transport one's self back to the time when miners and cowboys roamed the dusty streets in search of gold and silver riches.

The evening light is awesome there. The sun faded and the surrounding high desert turned from yellow to gold to shades of pink. The old glass windows took on the shapes and reflections of the barren streets that surround them. It's a peaceful surreal experience to be there as the sun goes down.

Scott and I worked with our group of nine photographers to find the best compositions and to also be thinking about where they will want to return once the sky has darkened and the stars have come out.

Before letting folks run amuck in the streets, we took them to a few locations as a group, so we could go over the star shooting settings, and get them all dialed in on what they needed to do. Our first order of business was the iconic town church, where we lined up our shots and Scott and I worked in tandem to light paint that historical building. 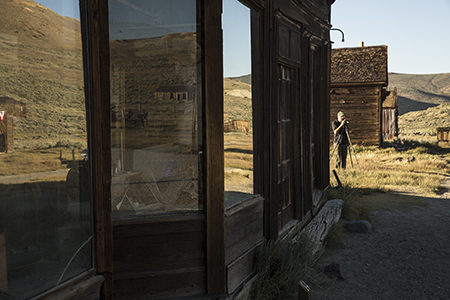 While Scott lit the building with a warm light from the outside, I lit it from within with a red lamp. This combination gave some depth and difference to the old church...and if we're honest, it looks a little spooky with the red light.

Once we did some pinpoint Milky Way shooting with the church, we set the class up for star trail shots. We got everyone dialed in with 12 five-minute exposures that we would later stack in Photoshop (in Sunday's post-processing seminar). While the cameras were shooting these 5-minute exposures, we got to go inside the barn where it was MUCH warmer.

Once our hour had passed and the star trails were done, Scott and I moved into two groups so we could work with them to paint two different scenes. One with two old brick buildings, and one with the iconic old car. The smaller groups allow us to work with different scenarios and light paint without a large crowd of folks.

After about a half hour, we switched groups and the other groups were able to shoot the same scene. This process ended with about an hour of time left for the group to explore the ghost town alone in search of their own images. After awhile, tired, but with cameras full of night images, we set off for our hotel and a much earned night of sleep.

The next day's action began with another trip to Bodie where we encouraged the class to look in the buildings, explore the cemetery, and go to look for higher vantage points...things they probably didn't see the day before. It was hot and dusty, so we didn't spend too long there, but a couple more hours in Bodie is always fun....but it is way better without the people!

That evening we headed to Mono Lake with the crazy tufa structures standing watch over that alkaline lake, like oddly shaped soldiers. Sunset wasn't amazing, but the pastel sky and the crazy shapes made for a serene moment in time. Scott and I helped dial in the composition, and encourage the use of filters to help balance the scene exposure.

Once the light faded, it was time to shoot stars. There was a lot of other folks who had the same idea, so there were lights crisscrossing in every direction...which makes shooting star trails difficult. But, that didn't matter. We opted to go ahead and find as many different Milky Way compositions as we could. While the group set up, Scott and I took turns breaking with different groups and also working in tandem to light paint the different structures. The shots looked SO good. It was another win for our night shooting experience!

We stayed until 11:30pm and then headed back to the hotel for another well deserved night's sleep.

The next day it was time to process the magic! The people at the Mono Lake community building, in addition to running day hikes, community education programs, a bookstore, and gallery space, also were kind enough to let us use their back room for our processing session. Scott is Lightroom Yoda, and he was able to help everyone process their images so they looked spectacular. While Scott instructed on the basics of merging photos, masking images, and creating smart objects, I wandered the room helping with technical issues, and offering some tweaks to images. All of the images we saw were amazing...such great work!

Overall, it was a great adventure in the dark. We saw multiple locations, we stayed out way past our collective bedtimes, and best of all, we learned some about photography and came away with some killer images. Great job everyone!