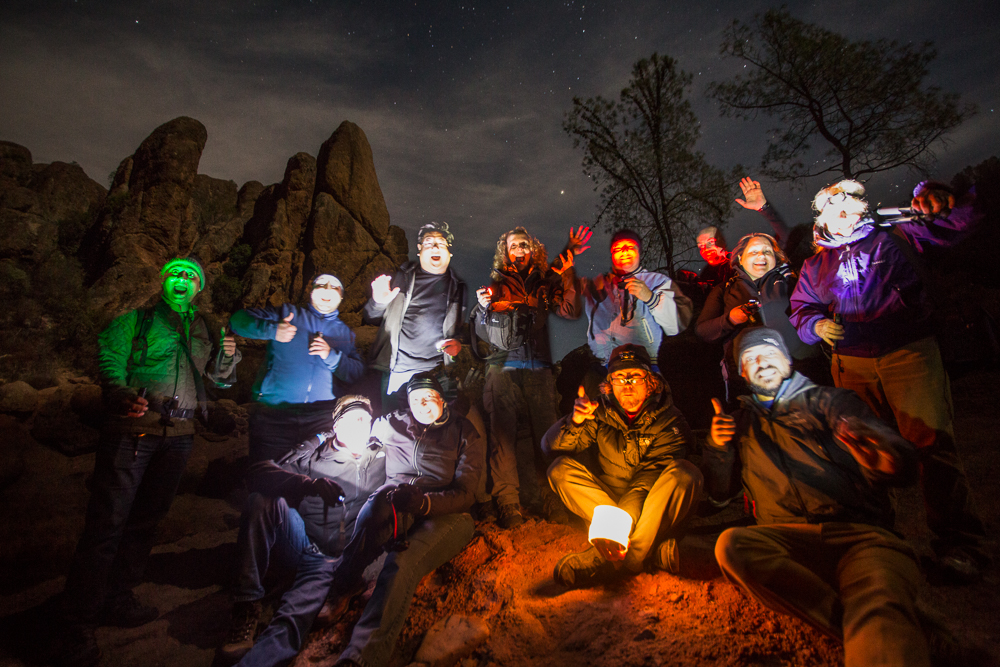 Why is the night sky so fascinating? Now more than ever, people are beginning to realize that taking pictures at night can be just as fun as taking pictures during the day. Why? I think since the advent of newer camera systems that can actually reproduce the night sky without noise is one reason. Another might be the mystery associated with this particular kind of image. We, as humans, can’t comprehend what an elongated time exposure of the night sky looks like, without actually doing it first. We can’t see time like a camera does. The streaks of stars (or lights) over an hour or two of constant exposure, just doesn’t make sense to our brains. But when the camera does it, and then we use computers to finalize it, it’s glorious! Hence the appeal of the Darkside workshop.

Finding dark night skies in one of the most populated places on the west coast is really hard. We have to travel quite a ways away from home in order to find night skies devoid of light pollution enough to make the skies appear normal. Starting from our base in San Jose, Phil Nicholas and I had a group of 10 star photographers, which we took on an adventure down south. Two hours south, to be exact, to the wilderness of Pinnacles National Park. Pinnacles is an ideal spot near the bay area for night photography. No major cities (and their light pollution) are near enough to the dark skies over Pinnacles to make a difference. And the park is close enough to make the journey worth it. It also has a pretty cool large rock formation that sets the foreground for the skies above. 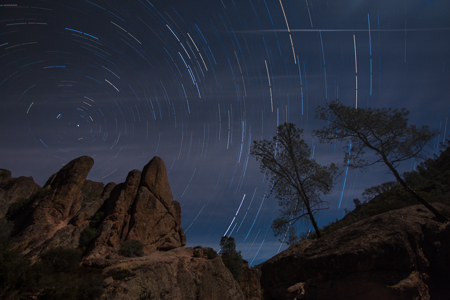 Arriving before sunset, we walked the mile or so trail up to the reservoir to get into position before the darkness. Getting everyone setup and trying out compositions during the daylight hours makes the entire process much easier, because we still have daylight to do things like focus! Once the night sky and stars become apparent, we switch over to looking at the stars and cross checking to see if they are in focus. As the night gets darker and darker (which happens quickly), we eventually start exposing for our long star trail shots. Digital cameras today still can’t shoot one long frame for an hour, because of all the noise you’d get. So we instead have to program the cameras to take lots of 1-4 minute exposures and use computer power to assemble them later. With the moon being so bright and illuminating the Monolith in the foreground, we got lucky and didn’t have to spend extra time light painting it, which is a huge bonus! After a little over an hour, everyone cumulatively had all the total exposures they would need for a badass star trail single shot. So we took a quick group shot, headed down the trail, and drove back to San Jose.

The following morning, we assembled again at our home base, and Phil and walked everyone through the post-processing bit of our workshop. Starting first in Lightroom, we organized our images and found all the ones we wanted to work with our star trail. We quickly processed them in Lightroom, before sending them to Photoshop for the final magic. Using Photoshop’s layer system, every image resides on its own separate layer independent from the others. So to get all the stars visible across all layers, they need to be blended differently by Photoshop. That is when we tell Photoshop to only let us see the lighter pixels from layer to layer. Once this is applied across all layers, and only the lighter pixels are visible, we see all the hard work done the night before. TRAILS! Easy peasy. We spent the rest of time working individually with the classmates and performing tasks like masking off certain parts of the images, cleaning satellites and planes from each frame and so on. After the work is done, our photographers saved their images and most downloaded them to take them home and prefect their new found skills!

Scott, Phil and the rest of the Aperture Academy Team!