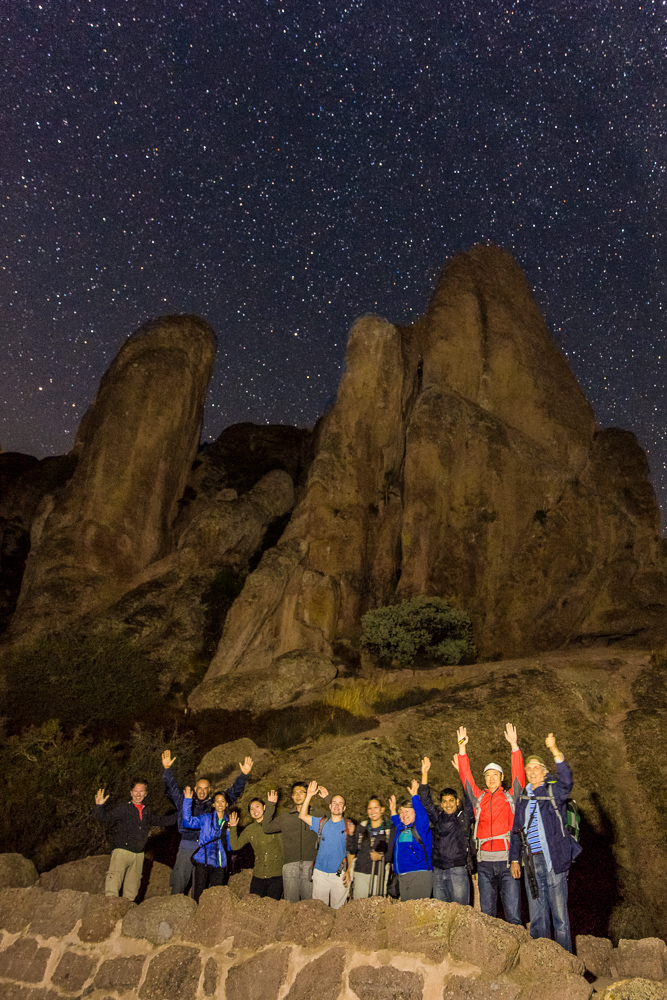 Visit any of the popular photo-sharing sites on the internet, and you will undoubtedly see many amazing images of the night sky. There is something about the vast star-filled night sky that resonates with people, so it is no wonder that night photography has become so popular in the past few years. With modern DLSR cameras, some instruction, and a little bit of practice, it is possible for anyone to get out there and capture magical images of the heavens.

Our weekend began at the Aperture Academy classroom, where we have a chance to get to know each other and just as importantly, get ready for our night out under the stars. Stephen gave a short presentation that covers some of the basic technical details related to shooting the stars. ISO, aperture, shutter speed, white balance … are all explained simply and clearly. Throughout the evening of shooting out in the field, we continued to go over these concepts, so that everybody left with a good foundation of what it takes to capture the night sky.

Stephen and Joe loaded everybody into the ApCad van and we headed south, away from the city light to Pinnacles National Park. We leave headquarters early enough so that we will have time to make the short hike out to the shooting location while it is still daylight outside. Because there was going to be no moon on this night, it was especially important that we arrived early enough to get compositions, focus, and camera settings dialed in while it was still light enough to clearly see the stunning pinnacle formation in the foreground. By the time the light started to quickly fade, all of the students had their lenses focused on infinity and were prepared to manually control their shutters as we prepared to shoot an entire hour of 5 minute exposures!

With my trusty iPhone in hand, I spent the next hour timing each of the 5 minute exposures and announcing a 5 second countdown, letting everybody know when to close the shutter and immediately begin the next shot. By the end of the hour, everybody had at least 20 five minute shots of the starry night sky, which we would use the following day during the post-processing session of the workshop. An important piece of the puzzle when creating the kind of star trail images we envision, is to have a nice natural-looking foreground, so before anybody moved their cameras, Stephen and I had everyone adjust their cameras so that we can take several shots of the pinnacles. Because we were shooting under a moonless sky, Stephen and I used various artificial light sources (i.e. camp lanterns) to provide the necessary illumination that gave everybody a nice set of images to use as foregrounds for the star trails we would be creating during post-processing. We ran around lighting the scene from various locations, while the students shot several 20 second exposures, until we were confident that everybody had what they needed.

The downhill hike to the ApCad van did not take very long, and soon we were back on the road to headquarters and prepared to meet to meet up for day 2 at the early hour of 9:00 AM in Aperture Academy’s state-of-the-art digital lab where we would spend a few hours teaching this group of night photographers some simple techniques for creating their final printable images.

By 9:00 AM, everybody was rested and thanks to Stephen bringing in a bunch of coffee and tea, caffeinated as well. The post-processing session began with a brief introduction of what we were going to accomplish as we looked at some sample finished images and explained how they are made. Everybody got their images loaded up onto the computers and we were on our way. Stephen led the group through the entire process, and everybody soon had their Photoshop documents loaded up with 20 layers of star trail images. As we taught everybody how to set the blending mode of the various layers, you can feel the excitement in the room grow, as people begin to see the star trails appear on the screen! Everybody learned how to blend in one of the foreground shots, and experimented with creating ‘comet-like’ star trails by adjusting layer opacities. The end result for all were a set of great and creative star trail images, which we saved right back to their memory cards so they could be taken home to be proudly shared and printed. It was a lot to cover, but everybody was up to the task and went home with a nice arsenal of new skills and techniques!

Joe, Stephen, and the rest of the Aperture Academy Team!