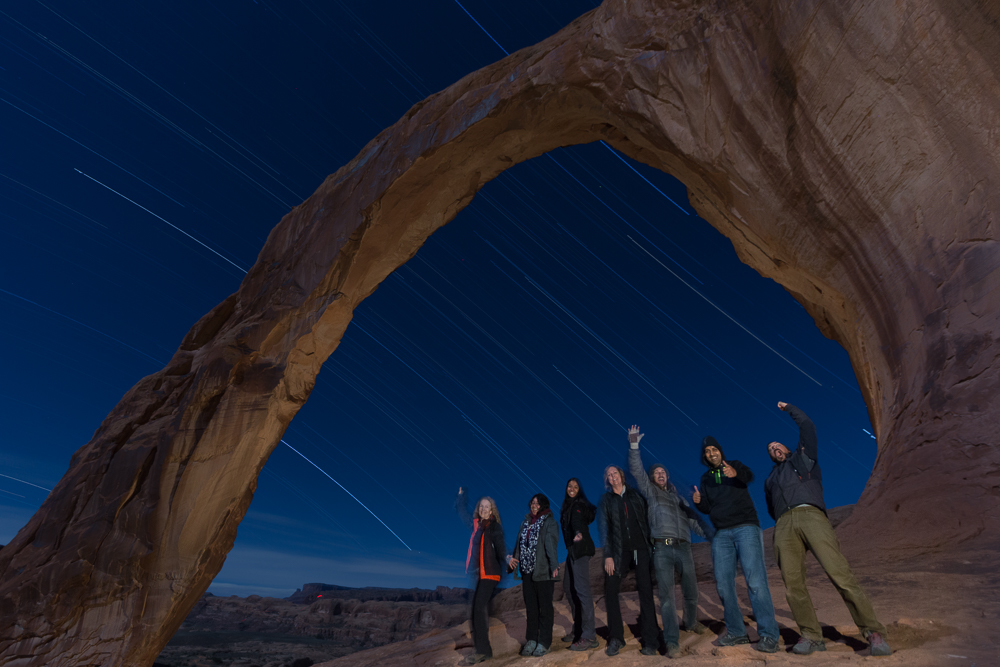 It is my personal opinion that there is no better place to photograph the night skies than the great Southwest. There is little light pollution and the landscape is out of this world! On an afternoon in early November Scott and I met with an excited group of photographers who were ready to explore the dark-side of photography. Scott and I conducted a brief orientation and introduced ourselves to the group and after a brief break it was time to head to Arches National Park to shoot sunset.

There were a few lingering clouds in the sky which caught the light rather nicely. Once the sun set, we drove to the end of the road and hiked to the longest arch in the park. Landscape arch is over three hundred feet long and is an impressive sight to see. Once the group got focused, Scott and I light painted the arch to give it a dynamic glow. After about an hour of shooting, we packed up and headed to Windows section of the park where we set up to shoot Turret Arch. Turret Arch is a bizarre looking rock formation and it is a blast to photograph. Even though the sky was filled with clouds at this point we were able to capture some interesting shots with fast moving cloud streaks. 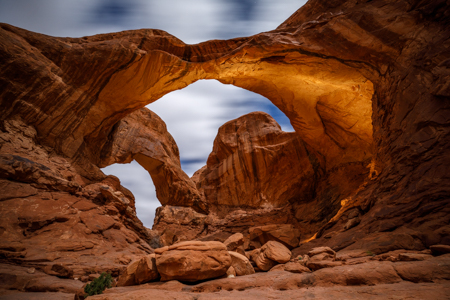 The Windows area of Arches has a lot of different opportunities for photography, so after the group finished at Turret Arch we moved our efforts to one of my favorite arches in the park. Double Arch is actually a series of two arches connected together and is unmistakable once you see it. The group began to shoot as Scott and I began light painting the arch and before we knew it all of the clouds had disappeared and we were able to pull off perfect pinpoint stars. The last stop of the night was Balanced Rock as the night came full circle. Soon the clock was approaching 2am and it was well past bed time. We drove back to the hotel and quickly went to sleep.

Perhaps one of the greatest joys of the night workshops is the fact that we get to sleep in! The group didn’t meet again until 1pm to ensure everyone had enough rest between shoots. The first stop of the day was a well hidden but beautiful set of pictographs in a canyon outside of Moab. After shooting the pictographs we drove over to Canyonlands National Park to shoot stars over Mesa Arch. The Arch is a very well known sunrise location but very few people shoot it at night. When we arrived, there were only a few people at the arch and most of them left before sunset. Once the sun went down we patiently waited until the sky was dark enough to shoot the stars. Eventually, the moon began to rise and we prepared to shoot the famous sunrise shot while using moonlight instead of sunlight. After a few hours of shooting at Mesa Arch we drove back towards Moab. The final shot of the night was star trails at Corona Arch. This arch is massive and quite a joy to photograph although the hike can be a little tough at night. Once we arrived at the arch we set up our intervalometers and began to fire away. Star trails can take quite some time so we played some music to make the experience more enjoyable. Eventually we wrapped up the shoot and headed back to the hotel. 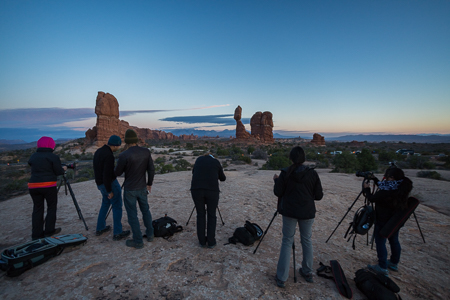 The following morning, we met up in the hotel’s conference room to do a little post processing magic. Scott and I showed the group how to assemble their star trails and even how to place the Milkyway behind various arches. The group learned how to mask their photos in order to blend various shots with different types of light painting. Before we knew it, three hours had flown by and it was time to wrap up the workshop.

Mike, Scott, and the rest of the Aperture Academy Team!