In photography, "Chasing the light" is something we do on a regular basis…often times the chase ends with the pursuer never finding the sweet light. Couple the chase with the face that many times it takes photographers to some of the world's inhospitable locations and it makes for quite the adventure.

This past weekend a hearty group of photographers joined Aperture Academy instructors Stephen Oachs and Brian Rueb in Death Valley National Park, one of the world's most barren and hostile environments to learn more about photography, and chase the light…

Friday evening began with an orientation to get to know the students and allow them some time to acquaint with one another, learn what to expect, and let the instructors know what it was they wanted to come away with from their weekend together. For many in the group this wasn't their first rodeo with the ApCad, and it was a chance for them to see old friends from previous workshops as well as let the instructors know what they were trying to focus on. Our returning students have the basics wrapped up for the most part, so for them workshops are about learning philosophy of photography as well as really working on composition and more focused (no pun intended) areas of learning. The group was released to head back to their rooms and get a good night's rest….it would be an early morning heading out to Mesquite Dunes in search of the light…

Morning came and the group assembled on time ready to roll. We loaded up the van and photo mo-ho and set off for the dunes under cover of darkness. A faint shimmer of warm light shone on the horizon.

The dunes are amazing. In the dark they appear only as round shapes silhouetted on a vast landscape. The closer you walk towards them the more their enormity becomes apparent. You feel the burn in your calves as you work your way out to a higher vantage point that gives you a nice view of the scene.

The group did well to get into the heart of the dunes, to a location that had fewer footprints. They set up to photograph what was shaping up to be a quite nice sunrise. During this portion we work a lot on composition as well as the use of filters to balance a scene. The curves of the dunes make for interesting leading elements into the images. The dunes are very good location, lending themselves to interesting horizontal compositions as well as vertical. When the best light had passed the group moved from the dunes into the cracked dry areas located in the valleys between the dunes. The cracked earth makes for very interesting foreground, and helps us teach more about balanced, interesting composition. 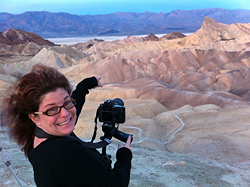 We hoped everyone had a big breakfast prior to our morning shoot, because the walk in and out of the dunes is a calorie burner for sure! We arrived back to the parking area and everyone was in need of a bit of water or a snack before heading out to mosaic canyon to see the powers of wind, water, and time through the lens of a camera.

Mosaic Canyon is certainly not the best slot canyon on the planet but it is a tremendous area to see the power of nature firsthand and the area has plenty of details, curves and texture to make it worth a stop. Again, this stop is perfect for helping students work on composition. Just because you're in a landscape as vast as Death Valley doesn't mean every image has to be grand in scale. Many nice images can be made using the small intimate details of a location. 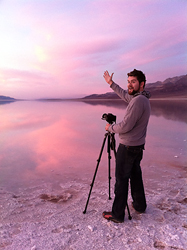 The last stop of the morning session was the ghost town of Rhyolite. During the mining era Rhyolite was a thriving town of nearly 15,000 inhabitants. Now it sits as a shell of its former glory, emptied out stone skeletons of buildings lay on a barren windswept terrain. One section of the area has been turned in to a modern art gallery of the strangest sculptures, creating a strong contrast to the environment and eeriness of the ghostly architecture. The group spread out and worked the ghost town looking for interesting compositions that showed off the structures mixed with the high desert and tremendous sky that was forming around us. Once the group had some "me" time to work on photography alone we met as a group near a house made entirely from old bottles. The bottles when combined with the adobe mud that held them in place would make for good insulators in the cold desert nights. In a couple of the bottles a cricket had been trapped, and now lay entombed for over a 100 years.

The students loved shooting the various textures, colors, and weirdness that the house held and were even treated to a brief history lesson on the home and town given by the caretaker of the property. It was a great personal touch to the location. We finished up and headed back to Furnace Creek so the group could grab lunch and rest up for the evening session of shooting. The sky was looking promising and the whole group was eagerly awaiting what looked to be an amazing sunset. 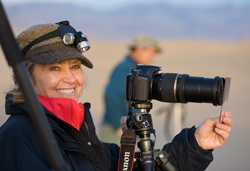 Our stop for the evening was the Badwater Basin. Under normal circumstances the Badwater area is a flat, dry area, full of interesting shapes and textures. During the winter, water from the Great Basin area floods north into the low lying area of Badwater creating a shallow temporary lake. While a few diehards waded out into the lake to find interesting compositions using the polygon shapes located just under the mirror-like surface, most of our group assembled on the edge of the salt flats and instructors worked with them to utilize split-grad filters and polarizing filters to bring out the best of the scene, which was shaping up brilliantly.

The mirror like surface contrasting with the stark white of the salty shoreline made for some spectacular imagery for the students as one of the best sunsets of the year blasted color throughout the sky for what seemed like an eternity. The conversation amongst the group switched between "oooooh" and "ahhhh"

When the last hint of color had faded from the amazing sky the group left and smiled all the way back to furnace creek where we had a group dinner and enjoyed a few cocktails together just as the old miners in the area used to do after a long hard day in the field.

Everyone left that night with a lot of great images, and ready for another super day of photography in the morning… 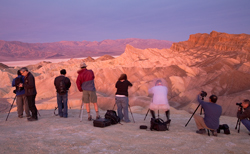 The first stop of the day is Zabriskie Point. This area is an overlook over rows of eroded barren gold and brown folds with deeply carved grooves from wind, water, and the hands of time. While I'm sure it's a geologists dream come true, the area is also a great place for photography. Whether photographing detailed shots of all the different warm tones and various textures or panning out to get a grander scene using the confection like hills mixed with the looming snow covered mountains in the distance.

The sunset fizzled a bit and the wind kicked up more than a bit, but the location was still amazing and instructors saw a lot of good images on the view screen.

The second stop of the morning was artists drive. We took two different stops on this route in order to let the students see more of the park and work on a few different concepts with them. We worked on using shallow depth of field in an area of the park that has been littered with tons of man-made cairns. Using the shallow depth of field allows the interest to be focused on the rock cairn, and blurs the background giving a unique perspective of the surrounding area. The second location required instructor Brian Rueb to get over his fear of heights and climb out on to a crumbling ledge and pose for the students in order give the scene a sense of scale. Putting a person in the image will give an ordinary seen a better feel by showing how vast it is compared to the size of the human, which creates more interest to the viewer.

The light in the middle of the day in Death Valley can be harsh…and on days with fewer clouds even more so. After our morning shoot we let the group have a morning break for a late breakfast or early lunch and get a little more rest as we had been up before the sun 2 days in a row and going hard for most of the previous day. The afternoon session would take us to see some of the parks more bizarre geological formations…The Devil's Golf Course. 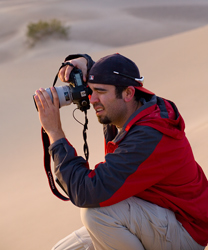 The Devil's Golf Course is a seemingly endless playa of hard, razor sharp, mineral deposits. The twist, turn, crack, and spread out as far as the eye can see. They are as ominous and evil looking as they are interesting. The group spread out and looked for areas where the shapes had weathered or crack to reveal small holes or arches. These little details created a good sense of interest in the foreground and provided some differentiation in the very repetitive patterns of the area. It's one of death valley's truly bizarre locations and the students enjoyed making compositions that showed off the ruggedness of the place.

Our sunset location for the night was off on a dirt road and allowed us to photograph some of the parks salt-polygons. The low laying areas of Death Valley have large areas of stark white salt flats. These flats fill with water at certain parts of the year, and combined with the wind create very interesting and repetitive shapes, which are very interesting for photography. We found a location that still had a bit of water left in it, and made for some reflective areas to help lend interest to the shots by pulling some of the color from the sky and putting it in the foreground.

The instructors walked our line of students and helped them all pick out some strong lines and compositions that would make the best view of the other-worldly scene. This was also the part of the workshop where a few students started to really get what they had been learning in the time prior. They were able to better find their own compositions and use filters and exposure to their benefit to give them the best results.

Like the night before the sky did not disappoint and the students were treated to another great sunset. In all the workshops we've done, I don't think there have been any other workshops that provided such great color and clouds for an entire workshop the way this workshop had. It was amazing to see, and very exciting for the students who all left having not only chased the light, but captured it, and put it on their memory cards to take home with them….along with the memories of a great weekend spent laughing and learning with the Aperture Academy,

Until next time, happy shooting,

Stephen, Scott, and all of us at Aperture Academy