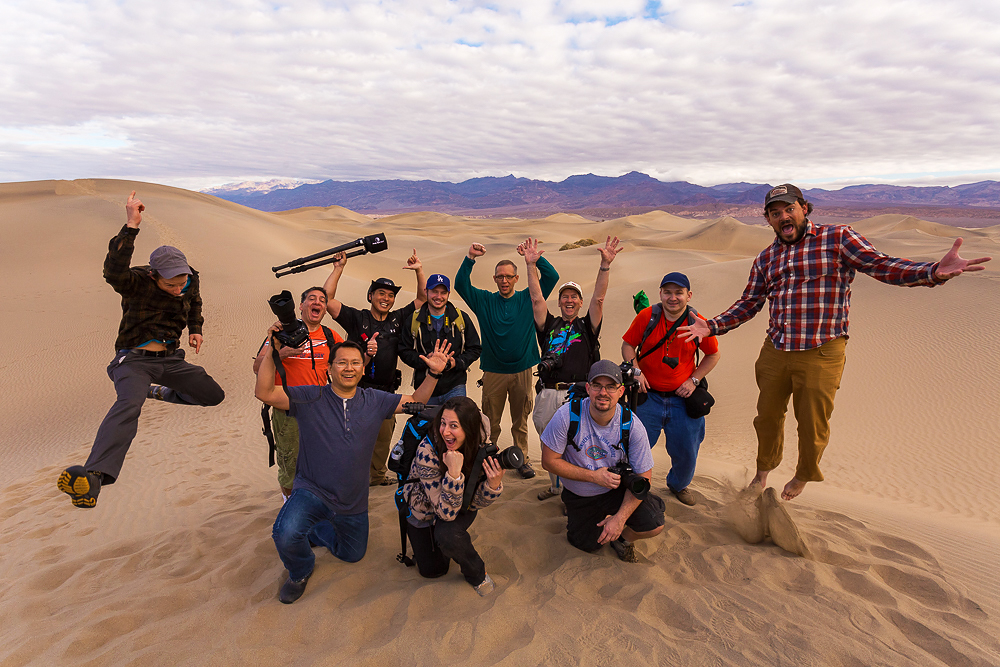 The great state of California is home to some of the most extreme places on earth. The towering summit of Mt Whitney hails an impressive 14,505 ft and is a mere 84.6 miles away from the the lowest point in North America in Death Valley’s Badwater Basin. Dropping into Death Valley from the surrounding mountains is like entering into a forgotten time. When you look at the rocky and salt filled landscape you can imagine where the ancient ice caps used to sit before creating a lake and then finally melting away into desert.

The valley is not only the lowest, but it is also the hottest and driest place in North America. It holds the record for the hottest recorded temperature on earth at 134˚ F. We choose to visit this beautiful stretch of the Mojave Desert in the earlier months of January and February because the weather tends to be fair with far more opportunities to photograph the landscape.

On Friday night Scott Donschikowski and myself met up with a great group of photographers who were eager to capture the raw beauty of this epic place of power. We introduced ourselves and got to know everyone on the patio. Meanwhile the Desert began to show us some of its extreme capabilities as the winds began whipping through the palms overhead. We finished orientation and retreated in hopes of a less windy morning.

We met our still eager group just after 5:00 AM Saturday morning to start our day. The conditions were perfect! The sky was filled with white puffy clouds and the wind from the night before had died down to a dull whisper. Our first stop was the Salt Pans of Bad water Basin. We hiked about a half of a mile out to some nice white Polygonal formations of salt. These polygons are created when the evaporation of rainwater is faster than new precipitation. In desert landscapes the water does not have enough time to soak into the ground before it evaporates, creating saltpans. 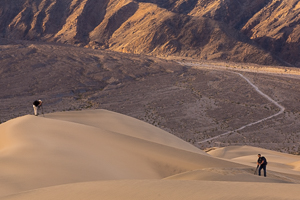 Scott and I started off the morning by showing the group some composition and camera techniques to emphasize the vastness of the pans. The formations created a wonderful foreground when the clouds finally lit up a vibrant orange. Scott and I made sure everyone was happy with their compositions and helped answer any questions. After everyone shot this to their fill we hopped back in the van and headed to the Cotton Ball Marsh.

The Cotton ball Marsh is an area where much of the water collects after coming down from the surrounding mountains and pools on top of the clay. As it evaporates it creates different phenomena such as salt formations cracked earth formations. We spent some time here showing the group how to work the surrounding landscape to produce powerful images with the low clouds. The group then split off into several smaller groups while Scott and I dropped in here and there with advice. After a few hours the clouds began to burn off and we headed back to the hotel for a break.

After a short break we rounded the gang back up for Artist Drive where deposits of rich minerals such as Manganese and Micah create an array of vibrant colors. This shot is perfect within the 70-400mm range so the group took out their telephotos and got to business. Scott and I skipped around giving advice and guidance where needed as we worked along a small escarpment back to the van. 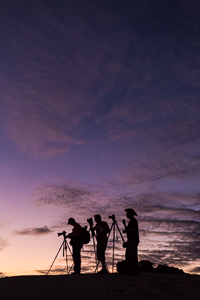 Next stop Bad Water Basin round 2! Because this location is smack dab in the center of the valley it provided an excellent view of both sunrise and sunset. This also gave everyone a second chance to capture the saltpans in their splendor. This time we went to a new location of Bad Water Basin just down the road. We parked the van and hiked just over a mile into what looked like powdered sugar covered chocolate mud. After about 20 minutes of hiking we found a great expanse of polygons set up the tripods and shoot. Scott and I demonstrated the use of using graduated filters and using diagonal lines in the composition to create movement throughout the scene. The sun lit everything aglow with color and made for quite the show! As the light died down we hiked back to the van and then back to the hotel to get some rest for day 2. 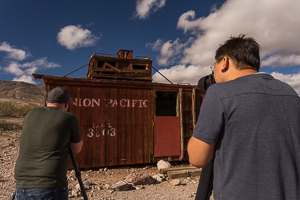 With a little bit longer of a drive we decided to get up just a little bit earlier so that we could shoot the sunrise on the dunes. The Mesquite Sand Dunes are the most accessible dunes within Death Valley and they provide unique and abstract shots for photographers. Just after sunrise the light comes in creating harsh shadows of dark and light on the dunes. Thus making interesting curvy shapes and contrast. We hiked out to the dunes for just over a mile where Scott and I split up and each took a few people to separate dunes. As the sunlight came in we got some brilliant pink color and light beams coming down onto the distant peaks. In this case the clouds only broke for a few minutes making the usual high contrast scene very soft. Scott and I explained how to tackle this light better by stacking different subjects and trying to find wider compositions. Everyone got some great captures here and were ready to see what we had in store for them next. 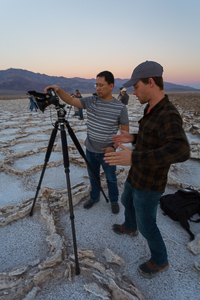 After break we headed out of California for a locals favorite meal at KC’s diner in Beatty Nevada. KC’s serves everything homemade and it shows! After a delicious lunch Scott and I helped a few people edit some images and showed them some tricks to enhance their photos. Now it was time to visit Rhyolite’s famous Ghost Town. Nestled in the surrounding hills, Rhyolite is a barren town with only the shell of past lives crumbling into the dry earth. The old buildings make perfect spooky subjects to try black and white photography and find interesting shots of clouds. After we parked the van Scott and I split up into two groups to explore some new ideas. Since there were still quite a few clouds in sky we decided that it was perfect to go over Neutral density filters and how to get longer shutter speeds out of your camera. This created some very favorable effects with the clouds making them wispy as they were pushed through the sky by the wind.

After a nice afternoon shoot in Rhyolite we hopped into the van and made a final push up to Dante’s View on top of the Black Mountains. Dante’s is considered to be one of the best views of Death Valley and offers a panoramic view for sunset. We arrived just in time to shoot the sun disappearing behind the Panamint Range. After a few minutes the sky lit up with pink and light blue hues making for a great cap to an awesome workshop.

Until we see you again, Happy Shooting!

Phil, Scott and the rest of Aperture Academy

Until next time our next adventure

Scott, Phil, and the rest of the Aperture Academy Team