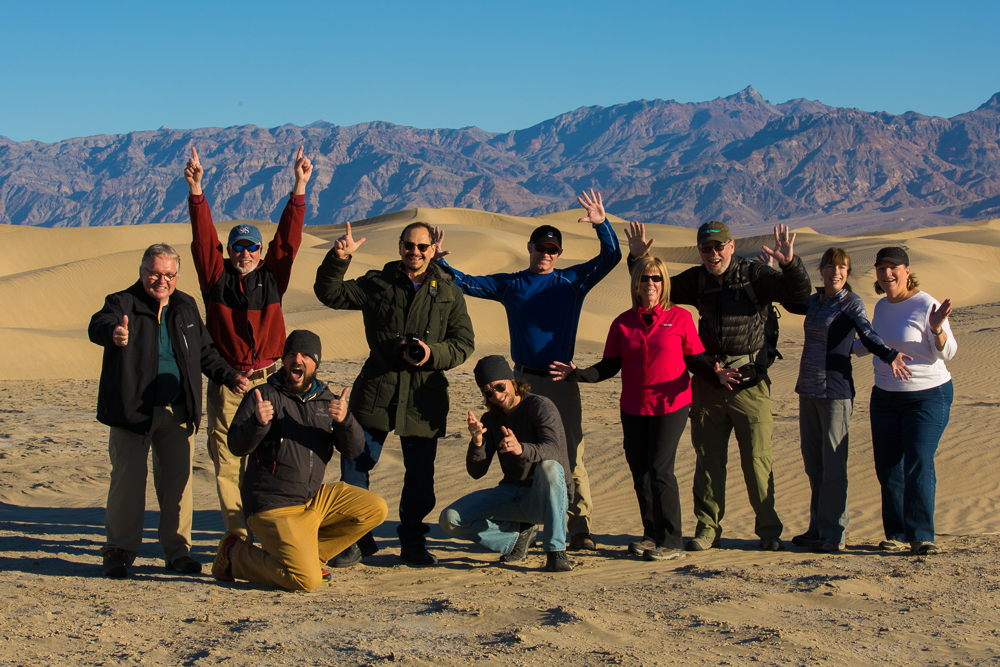 Welcome to Death Valley National Park, a giant desert surrounded by jagged peaks and sweeping valleys. It is the hottest of all of the national parks, holding the highest ever recorded ambient temperature on the earth's surface. This desert is home to sand dunes, expansive salt pans, and crawling (yes, crawling) rocks. It's funny to think that people actually visit this place. It is even more outlandish to think that many people actually visit this park during its peak temperatures in the summer! While that's all fine and dandy, most photographers, such as ourselves, like to visit the area before the heat wave of summer comes rolling in.

This past weekend Scott Donschikowski and I met up with a great bunch of pixel heads to capture some desert majesty. The workshop started on Friday so that we could all get to know each other and get ready for the next two days of shooting. We all congregated outside of the General Store for a brief orientation and to walk everyone through the details of the weekend. After Scott and I had learned everyone's names and everyone had begrudgingly agreed to meet us at 5:30 AM we parted for the evening to get some much-needed sleep.

Saturday morning we all headed out to Zabriskie Point, or as I explained to our group, the half dome of Death Valley. Zabriskie Point is a great vantage point of the sediments left over from the ancient Furnace Creek Lake which dried up long ago. This area is popular among photographers for good reason. The views are wonderful at sunrise. Scott and I got everyone out to the point and ran them through some important settings. Once the sun began to rise everyone was ready to capture it. After everyone had had their fill with the area we all hiked back to the van and headed down to a rare sight indeed. The wild flowers were blooming in the south end of the park and they had carpeted the desolate desert landscape with yellow paint. A local told us that this was the earliest that they had seen wildflowers in all of his memory. What a treat! We let everyone loose as they laid down in the thick flora and played with interesting compositions and different angles. Scott and I popped in and assisted here and there with ideas and settings. After about an hour or so, we left the wildflowers and headed north back to the hotel for a little mid-day break. We needed to be energized for what was to come. 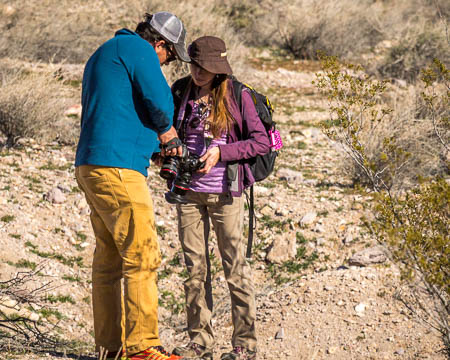 After break we all headed out to the spooky little ghost town of Rhyolite. This town was deserted after the gold rush and has been idle ever since. We started everyone at the top and they worked their way down from an old caboose, a jail, a brothel, a bank and a few more crumbling structures. Once everyone had worked their way down to the bottom we hopped back into the van and took off to our sunset location back in Death Valley. The location that we had picked out was about a 20-minute walk out onto the salt flat of Bad Water Basin. Bad Water is the second lowest place in the western hemisphere and is made up of mind-boggling hexagonal salt formations that make for some amazing photos. After the trek the students were happy that they had made the journey as they set up their tripods to await the "sweet light." Scott and I demonstrated how to use graduated filters to enhance their exposures and helped folks out with different compositions. The sunset proved to be a grand display as the clouds illuminated with magenta hues, the stillness only interrupted by the occasional click of a shutter. As the light began to fade we fired up our headlamps and returned to the van. 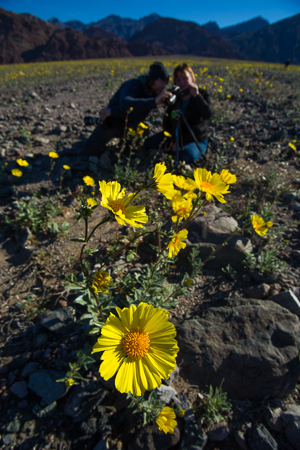 The next morning we met even earlier than the previous day so that we could allow time to hike out to the Mesquite dunes. Our hike was mostly flat until we got out to the dunes. We all climbed one of the bigger dunes once we arrived to get a good vantage point for sunrise. Scott and I went over some ideas for composition and gave tips to the students as they surveyed the new scene. When the light came in it turned the sky a bright pink and made for a great backdrop for the dunes. After the color faded and the sun rose above the horizon, the students began walking up and down the dunes to find new and exciting compositions. Scott stayed with half of the group and I went with the others and pointed out different ideas before letting them go discover on their own. After a few hours the sun rose higher in the sky softening what were once nice stark shadows with nice contrast for shooting. We decided that it was time for a quick group shot and then a break. We gave the students about an hour to break and regroup before meeting back up for some post-processing. Now that everyone had some great images to work with they were eager to learn some new editing skills. Scott and I split the group up and walked them through some good techniques for editing in Lightroom. We spent about two hours here before heading out for our last shoot.

Next up was Artist's drive. Artist's drive is a scenic drive that winds through an alluvial fan or deposit of sediment brought down by runoff of streams. These deposits of minerals have created a mixture of vibrant colors nicknamed Artist's Palette. We gave the students some ideas for the best times to photograph this area and how to edit images to enhance the already vibrant scene. Now it was getting late so we hopped back into the ApCab and cruised north up to the Cottonball Marsh. The marsh is an unusually moist area with runoff streams that can make for some nice reflections. Scott took half of the group out to one side and I stayed with the others near the stream. The light was nice and made for some great reflections as the colors intensified. As the landscape began to get enveloped by the shadow of night we made one last journey back to the van and headed to the hotel to say our good byes. It was a great group and I know Scott and I enjoyed it thoroughly. We made some new friends and created some fond memories. We hope that you all did too!

Phil, Scott, and the rest of the Aperture Academy Team