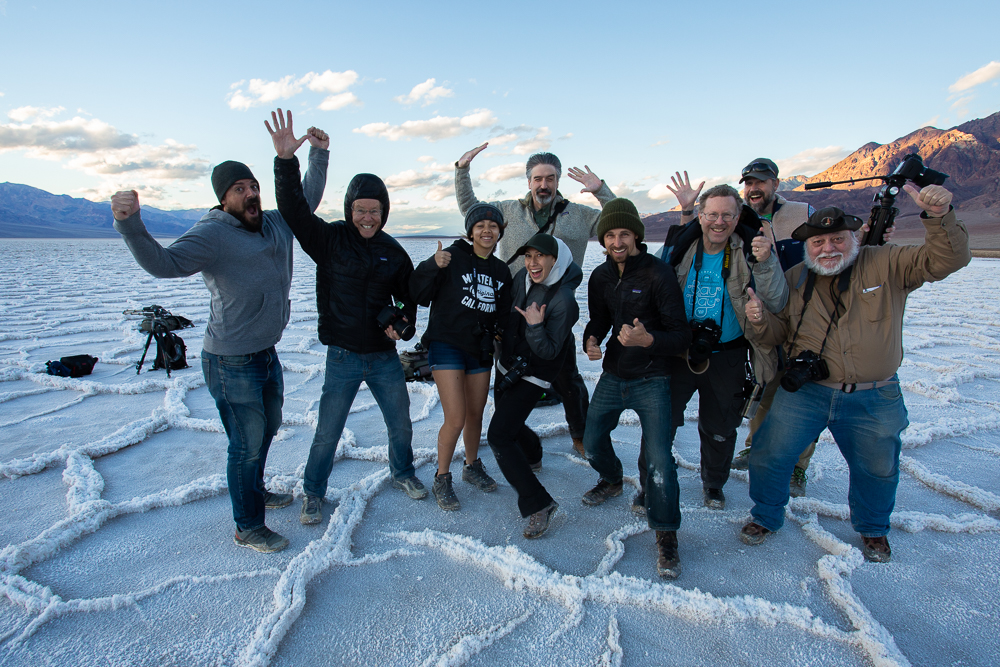 There are few places on the continent that have diverse geological features in a small geographic area. This diversity is a welcome characteristic for landscape photography, as one doesn't have to travel far to witness the diverse landscape. Death Valley National Park is one of these places. Because within its borders, there are several amazing and completely unique landscapes the likes of which is unrivaled by other more popular photographic destinations. Sand dunes, cracked earth, salt flats, snow capped mountains, and colorful mineral deposits are abound in the park, making Death Valley a premiere destination for photography. Every winter Aperture Academy hosts a couple of photographic workshops in Death Valley, and the following is an account of our February trip!

Meeting in Furnace Creek, instructors Mike Wardynski and Scott Donschikowski gathered with our February workshop participants at the newly renovated Ranch at the Oasis, and began our customary orientation where we introduce ourselves and allow the others share information about themselves to get everyone better acquainted. Mike and I went about explaining the weekends events and shared a little bit about our backgrounds in photography. Everyone always gets excited about exactly what time we would be waking up the next morning, and since its winter, the time wasn't too early at 6:00 am. So off to bed we went, ready for the adventure to begin! 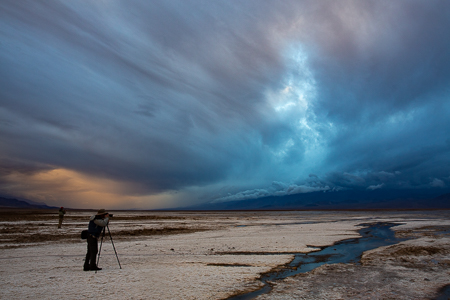 Death Valley rarely gets any rain, yet February is consistently the month when we seem to run into it. And today was no exception. Starting off at Zabriskie point for sunrise, we were lucky to beat the crowds, while under threat of rain, and managed to photograph the site unimpeded by both for a couple hours. The scene was flat, which has its pros and cons, a con being there was no amazing light that illuminated the landscape, but a pro being that the colors in the scene would be easier to tease out in post production. Next we headed to Artists Palette to take advantage of the cloud cover. This area is in sunlight the whole day which has the effect of washing out the color and making the area look sun-blasted, but under the diffused light of the clouds, the colors can be enhanced very easily.

After a short break, we headed out of the park to the ghost town of Rhyolite, where the weather turned a bit for the worse. A thick layer of fog covered the mining town, and provided an eerie and interesting look, when photographed in black and white. But the wind and mist from the fog made it a little difficult to photograph the scenery properly and we left the site a little early to head back to Death Valley and check on the weather there for our sunset spot. We gave everyone a quick break before heading out to the Cottonball Marsh, where the clouds looked absolutely fantastic. We decided to stop there for sunset, and made our way out to flats, and the sky angrily lit up teal and orange to the south. It looked like fire and ice as the clouds swirled above us. But the just as quickly as we set foot on the flats, the light dwindled from the cloud cover and we called it a night. 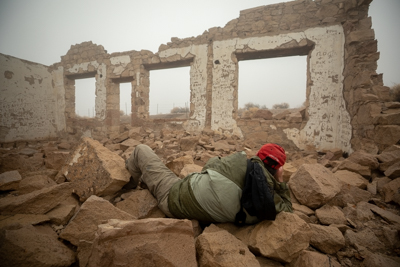 The wake up call for this morning was an early 5:00 am. Today we would make our way out to the Mesquite Sand Dunes for sunrise. The dunes hold a special surprise in the early morning hours; when the sun crests the mountains in the east, an extreme dance of light and shadow is performed on the faces of the dunes. Taking a direct route to the middle of the dunes, we set our sights for sunrise atop a couple of the higher peaks and waited for the magic. Although the clouds were thick above, there was just enough space between them to let the sun shine through and illuminate the sky with color. From then on, we waited for holes in the cloud cover to take advantage of the direct sun which continued its light-shadow battle on the dunes below. When it seemed clear that the sun was not going to come back out from the clouds, we headed back to the van, and then to the resort at the Oasis for our midday break. During lunch, Mike and I spent two hours helping the group in a post processing session, where we covered everything from the basics of Lightroom to focus stacking in Photoshop. Shortly after getting our gear, we headed out for the last shoot of the weekend; Badwater Basin. This place is probably one the of coolest and most unique natural features in the world. And we saved the best for last. After about a mile walk out the most perfect spot in the middle of the Badwater Basin, setup for our sunset shoot and helped everyone get acquainted with life amongst the giant polygons. The wind was whipping and the clouds where impressive although a bit scattered. But that didn't dissuade the giddiness of the group, as ate up the opportunity to spend a pretty remarkable sunset on of the most unique places they had ever laid eyes on. As the sun drifted below the horizon and the clouds lost their light, we packed up our gear and began the long walk back to the van before it got too dark to see. And after the short drive back to the Oasis, we still had time to catch the 4th quarter of the Superbowl!