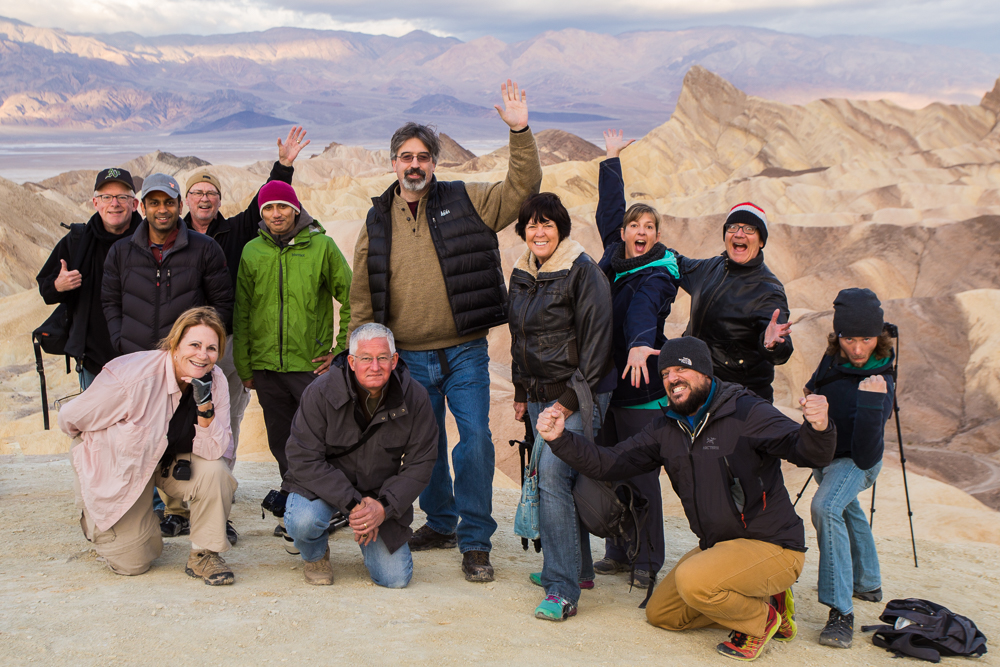 Death Valley National Park is one of the hottest, driest, and most inhospitable places on earth. Temperatures can reach triple digits regularly in the summer, and average rainfall is a mere 2 inches. So why would anyone want to pursue this place for photography? ‘Cause it’s awesome in the winter and it’s quiet, cooler and has some of the weirdest and most photogenic features found anywhere in the world. We run at least two photographic workshops here each year in the winter, and right by my side through this one, was fellow photographer and instructor Phil Nicholas.

After several hours of travel from our headquarters in the bay area, we arrived in Furnace Creek, which would be our base of operations for the next few days. On Friday evening after sunset, we have our customary orientation meeting fireside at the Furnace Creek Ranch. We welcomed folks from all around the United States, we shared stories about ourselves and then proceeded to talk about the weekend’s events. Everyone is usually at the edge of their seat wanting to know what time we'll have to wake up for the first shoot Saturday morning! After our orientation, it’s time to catch some z's. 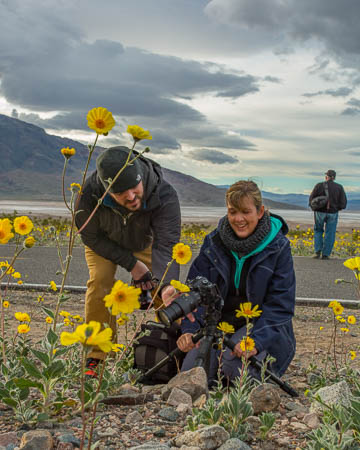 Our job at Aperture Academy is not only to be there for our students to help compose, critique, and answer field questions, but also to deliver them to the best possible spots, in the best possible light. This morning, that happened to be on the mesquite sand dunes. To get nice shadows on the dunes, you really need direct sunlight with very little or no cloud cover. And today didn’t disappoint! After a long stroll over flat ground, we arrived in the middle of the sand dune area, isolated from the more heavily walked areas near the parking lots. Phil and I led our group into two splinters, and took perch atop the dunes as we awaited sunrise. It was magical! Pink and red from nearly every corner of the sky illuminated the scene and everyone was speechless as we photographed the area. As the sun drove higher, we let the groups explore the area giving the insights on what to look for in compositions. After more than an hour, we headed back to the van and to Furnace Creek for some breakfast and a short break. Midday we traveled out to Rhyolite, a small ghost town in Nevada, just near the border of California. Rhyolite was a gold town in the early 1900's which boomed quickly and then went bust a few short years later. Most of the buildings are all but gone, but a few concrete structures remain, and we used their ruins to try out some long exposures with the moving clouds. As time wore on, we made our way step by step through the town looking for interesting compositions with the buildings, ruins and clutter strewn about the desert scene. After photographing the ghosts and the other various sculptures at the Goldwell museum, we headed back into the park for our sunset spot at the Badwater Basin. Officially 282 feet below sea level, Badwater is lowest point on the continent. A vast salt crystalline playa stretches for over 37 square miles and is home to the weird hexagonal shapes formed from the repeated freezing and thawing of the trace water on site. Sunset provided a little color to the north, and using the seemingly endless landscape of salt as a foreground, we got some pretty unique photos of the basin. As darkness set in, we headed back to the ranch for dinner and another early rise. 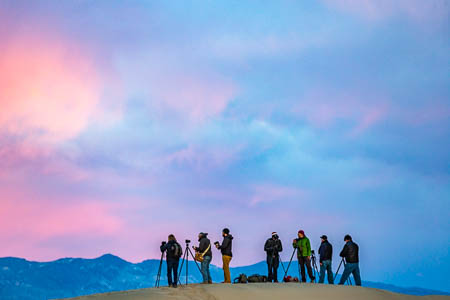 With the weather changing our schedule around, we went to Zabriskie Point for sunrise. Zabriskie point sits atop an alluvial fan erosion area just higher than the valley floor. The colors, folds and shapes of this area are as cool to photograph as the centerpiece of the vista, Manly Beacon. Not expecting much from the cloud cover, we were surprised to see the area to the south light up! We soaked up as many shots as we could while it lasted, took our group shot and parted ways with Zabriskie in search of something even weirder than rain in Death Valley: wildflowers. South of the Badwater Basin, the rains from previous months had turned the surrounding hillsides into yellow and green fields. We stopped near one of the biggest concentrations and had our group explore around trying to find interesting ways to shoot them. We spent time talking to folks about composition, focus stacking, macro shooting, it was quite the morning! 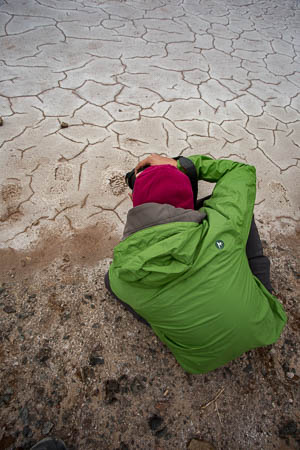 In the afternoon we met for a couple hours to run through some post processing. And then it happened! Rain! As we ducked under the awnings we continued our endeavors, talking about processing images from the last day, giving advice on composition, using Photoshop and the like (all the while it rained down). Even though it was sprinkling at this time, we decided to see what fortunes may give us, so we headed out to Artists Drive. The jewel of Artists Drive is Artists Palette, another alluvial fan formation which has been eroded to show the various oxidizing metal content in the soil. In the early morning hours, or during cloud cover, the mineral colors are more easily photographable. The pinks, yellows, reds, greens and purples can be accentuated through over saturation, and the lack of extreme contrast from the clouds helps bring the colors out even more. As our group braved the light sprinkling of rain, we were all dismayed to feel it grow in intensity, causing us to retreat to shelter. As we drove on, toward our final shooting spot of the weekend, the rain kept intensifying until we reached the Cottonball Marsh, which had flooded from the afternoon downpour. With the rain still coming down in droves, we sadly drove back to Furnace Creek and had to call the workshop early. With most of the group staying in the area for another day, Phil and I dispensed information about various other locations in the area, before saying our farewells to our awesome participants.

Thanks for a pretty sweet weekend in the desert guys, and we hope to see you all again soon!

Until our next adventure

Scott, Phil, and the rest of the Aperture Academy Team