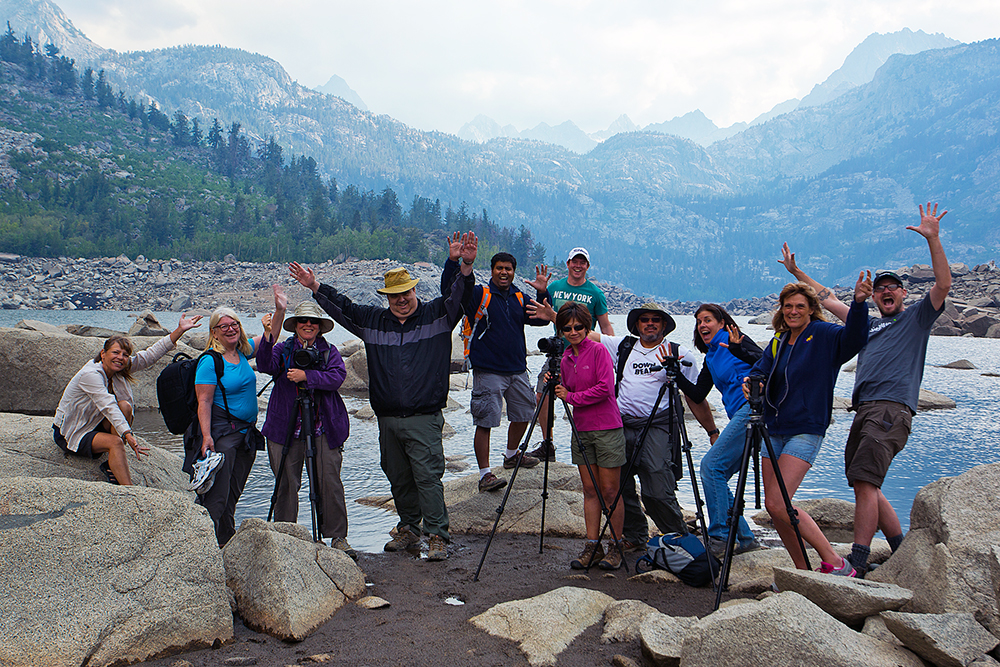 The mighty Eastern Sierra is easily one of the most impressive ranges in the Unites States, maybe anywhere. They jut out from the valley below, a massive granite fortress that must have been a daunting site for early explorers trying to pass. Thankfully times have changed, and we are no longer facing the uncertain task of surviving these massive mountains, we get to do fun things like figure out how to make them look inspiring in photographs. This past weekend Jean Day and I had the privilege of leading a group of wonderful photographers around the Sierra, and surrounding areas in search of amazing images.

Friday night is orientation, and I could tell by the laughter in the group, that we were going to have an excellent weekend. Nobody was too thrilled with the early wake up time, but the morning light comes early on the slope of the Sierra, and we wanted to be ready in the Alabama Hills in case we got a terrific light show.

It's the monsoon season in this part of the country, so that means dramatic thunderheads rolling into town at all times of day and scattering showers throughout the day. Thankfully these clouds don't normally bring large amounts of precipitation, and most of the time they bring some downright dramatic clouds. 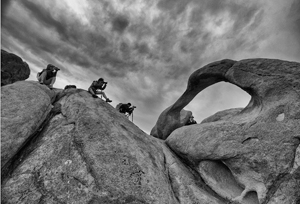 We arrived in the hills with a little time to spare, and we waited out the rain as best we could…when the drizzle subsided we still had time before the sun rose somewhere in the clouds. We set out for the iconic Mobius Arch first. This crazy shaped rock offers not only a great shape to photograph, but also a window to look at the sierra range in the near background. The class spread out along the nearby rocks, and Jean and I helped everyone get set with their compositions, and camera settings. While the main area was a bit tight for everyone other people were able to shoot nearby lathe arch, or some of the many fascinating textures and shapes located at every turn in the hills.

During the morning we covered other topics like composition, white balance, and histograms and their importance to good photography. From our fist stop along these hills we moved to a higher location where barrel cacti grow, and are available to use for a different and exciting foreground element with the hills and mountains as a stunning backdrop. We spent another hour here as I walked the group around to show them some of the more 'photogenic' cacti in the area. Jean and I saw a lot of great shots on those cameras! So many good pictures in fact the rain decided it wanted to get us out before we took ALL of the good shots there. 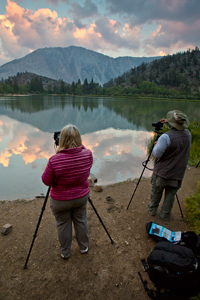 That was OK, because we were on our way out anyway! After a 'brief' stop for some legendary burritos in the town of Big Pine, made at a Chevron station, we made another stop at some awesome ponds near the town of independence. These ponds offered up some great reflections (at first) of the surrounding mountains, and the sky had begin to clear a bit, forcing dramatic clouds to dance in and out of the granite peaks…really made some dramatic images. Jean and I worked a lot with the class on composing here, and using the foliage as foreground. The recent rain had made the areas plants really vibrant in color, and some of those gold tones went really well with the blues of the sky and mountains, and reflection. Of course when you're dealing with reflections, you're talking polarizing filters…and we covered that as well as some graduated neutral density filters.

We took a longer break in the afternoon to help battle the long morning, and give us energy to shoot sunset and stars in the Bristlecone Pine Forest high above the valley floor. The drive up to the top is curvy and long…and I think everyone was thankful when we arrived.

Light beams were shooting out of the sky, and the possibility of a really nice sunset was apparent. We marched up the short trail (but at 10K feet elevation, it doesn't FEEL short…it feels like a marathon!) and set up around two of the more prominent and dramatic trees in the Shulman grove. It's so impressive to me to be around these magnificently old trees. The oldest living things on earth…with some trees ranging in the 3500 to 4000 year mark. WOW!

Sunset was really a nice blend of warm tones, and textured clouds…we got some amazing images for certain. We helped the group find the right composition, and then use their cameras and filters to get the best possible image.

Once the sunset light had faded we spent the next hour and a half waiting for dark, and explaining the settings we would be using for our night photography session. Thankfully ALL the clouds blew off like I predicted, and we were left with a clear sky, perfect for shooting the night's stars! 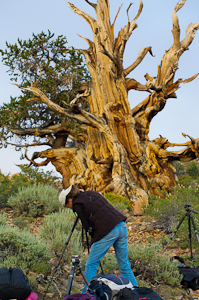 We focused on two specific types of night shooting. The first was pin point stars, and milky way images, the other was more lengthy exposures which we could blend in PS to make star trails. Each method requires time, and a bump in the ISO, which we discussed while we waited for the best conditions.

Once the light was right we got set up and I painted the tree with a flashlight while we shot…to hear the excitement from the group (a few more jubilantly than others) when they saw their screens after the first few pinpoint star shots, was SO awesome…I love to see people “GET IT” and start to put the pieces together on how to do certain types of shooting.

We spent about 2 hours shooting the stars before everyone got too cold to continue and we made the long, slow, winding drive back to Bishop for a few hours of sleep before our second day.

The second morning we spent along the Owens River looking for curves, and ponds to shoot. Really a pretty little river with gorgeous views of the Sierra. The clouds form the previous day had vanished, and left us with some slightly hazy conditions due to the recent fires in the vicinity. We made the most of it, talked composition, filters, and how to make the most of what nature gave us. Everyone was still tired from our long first day, so after a brief visit to some really nice nearby petroglyphs we went back to the hotel for breakfast, a nap, and a couple hours in the afternoon of processing images.

Processing the images was a lot of fun. I enjoy showing people some of what I know with processing, and how every image really needs some work in order to make it look its best.

After the processing we went up to the higher country where we paid a visit to lovely Lake Sabrina where we did some longer exposures with ND filters for those who had them, and a lot of people shed their shoes and got right in the lake to get some great compositions. 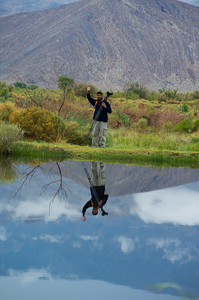 The final spot was North Lake, which was sitting immersed in great afternoon thunderclouds. Whatever had eaten the clouds in the morning released them, and our night looked to be really nice and dramatic.

The group spread out along the lakeside and we helped them find compositions they enjoyed and worked with a few on some interesting techniques of panning while shooting to get some great intentional abstraction in the trees….they had a lot of fun playing with this technique while we waited for sunset…and what a nice sunset it was. North Lake, which is rarely not being hit with wind, was glassy as could be for a few minutes, and the class made the most of it getting some TREMENDOUS sunset images.

The reflections lasted long enough for everyone to get some really nice images. We used polarizing filters and our graduated neutral density filter to make sure everyone's images looked their best. When the wind came back we zoomed in and I showed a few of the students how to take some really cool abstract images of the reflected color on the top of the lake….it's hard sometimes with such grand scenes to stop and look closer, and more intimate…often nice images can be made that way as well.

It was sad to see the color fade, that meant it was time for us to finish our class….and Jean and I had SUCH a great time with everyone laughing and joking throughout the weekend…it was a shame it had to end…but thankfully it ended with some terrific photos on those cameras!

Brian, Jean and the rest of Team Aperture Academy