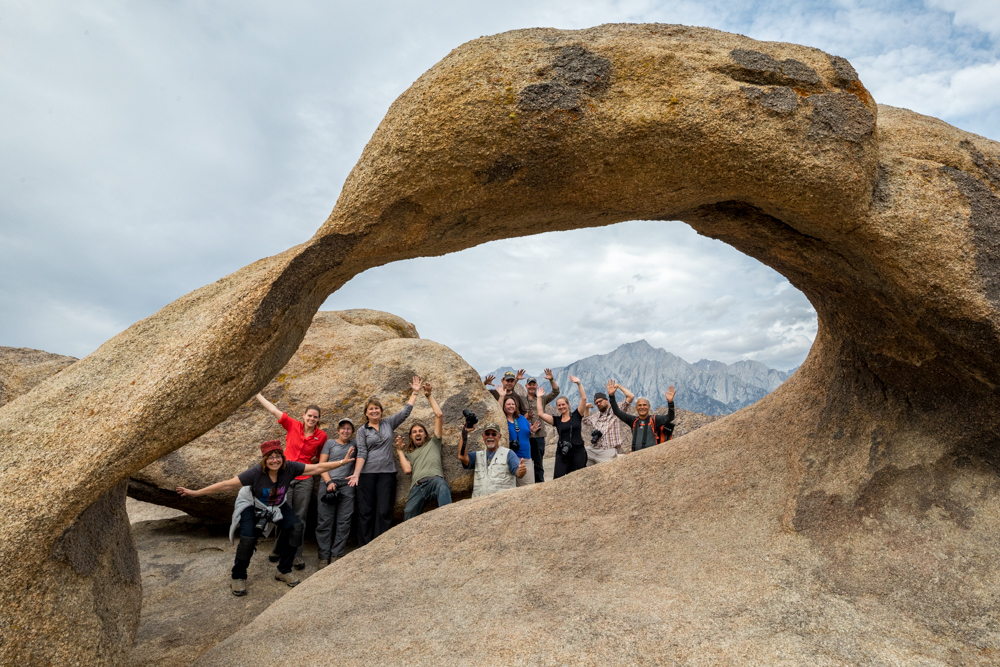 Ansel Adams called it the range of light, and for good reason. The granite that makes up the Eastern Sierra mountain range has a special way of working with morning and evening light that almost seems as if its glowing. Stretching over 100 miles in length along highway 395, this range of light has more than a few great spots for photography. Mike Wardynski and I met a group of twelve awesome folks for a full four-day weekend of outdoor photography.

Thursday night we all managed to avoid the numerous roads closed by forest fires, and meet up for our orientation. Folks came in from all corners of the map to work with us on various aspects of their photography, and explore this wonderful area. Little did they know, these adventures start EARLY. 5:15am was our first morning departure, time to get some rest!

Morning one came early, and everyone was mostly in pretty good spirits, considering the time. We drove out to Mono Lake South Tufa, home to some of the most bizarre natural formations in the world. Over time, calcium and other minerals have flowed out from underground springs, and built up into crazy shapes. These shapes are a blast to photograph, and Mike and I had fun pointing folks into the right direction, so they could begin to set up shop. The water was calm and reflective, and the sunrise light is always amazing. Mike and I helped point out compositional tips, filter use, and of course, the typical settings. Everyone has a different level of skill... so it’s important to check with folks often to make sure they’re moving forward in the right direction. 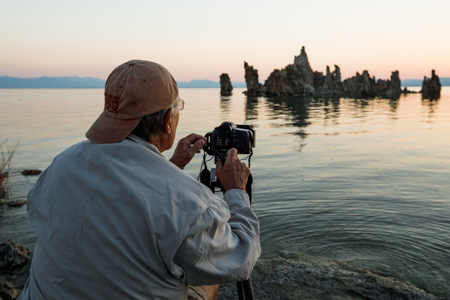 The time really passes quickly out photographing... soon it was time for some morning sustenance and coffee. Everyone needs coffee, or something to help battle the morning sleepies. After a small break, we set off to the ghost town of Bodie for an afternoon exploration in one of the worlds best preserved ghost towns. In the Early 1900s this was a bustling gold rush town... after a few short years, the gold dried up, and the majority of the townsfolk up and left to greener pastures.

I’ve been coming to this historical ghost town for years, and I still find new and interesting things I’ve never seen before. It’s always fun to show folks this location and help them make the most of it with their cameras. The textures and abundance of old buildings makes Bodie a great place to work on monochrome shooting...

Bodie is best explored alone, so we encourage the group to spread up, look in windows, and make the most of the their time here... really trying to imagine what it must be like to have lived in this town during the rush.

Mono in the Morning, Bodie in the afternoon, why not visit Yosemite at sunset? We drove our group of excited photographers up Tioga pass to Olmsted Point. From this great vantage, we had a beautiful view of Half Dome. Local fires had created a fair amount of smoke, but also allowed for the evening light to really intensify, and the overall warmth was quite nice. Mike and I helped point out some compositional ideas, and make sure everyone was dialed in with their larger lenses, and tripods so they could really make the most of Half Dome. When the light of the sun faded away, it was time to walk off the granite shelf, and make our way back to the hotel for a few hours of sleep before our early morning photographic attack on Convict Lake, another one of the east sides’ wonderful alpine lakes. 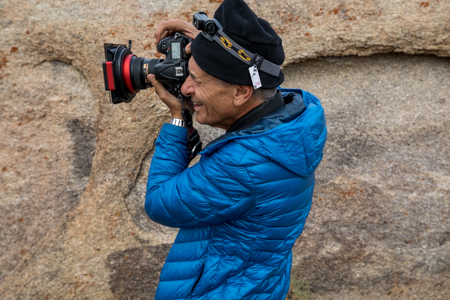 Convict Lake is a gem of a lake, surrounded by tall granite peaks... it almost feels like this lake should be miles within the backcountry, as opposed to near the highway. With it being so close to the highway, it makes it a very popular spot for not only photographers, but fisherman. We always beat them to the lake, and have our tripods set up well before the first rays of the sun grace the granite. Early on, Mike and I have the group bump up their ISO so they can get some images, and check their compositions. As we move from darkness to light, those ISOs will drop, and we’ll begin to make the shots the count. The lake was calm and glassy, and we had the group set out all over the edges utilizing some of the rocks along the edge for foreground. Sunrise provides some amazing light on the peaks, and combined with the reflections, it was truly beautiful.

Once the sun was up higher, we suggested working on shooting intimate shots of the golden reflection, with the cool rocks of the lakeside... it was all in all a spectacular morning.

After fleeing Convict Lake we made a brief stop along the June Lake Loop for some aspen tree fun. Abstract shots are fun, but often difficult for photographers to work on... Mike and I showed the group a couple different ways to use strands of aspen trees to make some wonderful panning abstractions.

Our afternoon was spent transitioning from Lee Vining to the town of Bishop, about 90 miles south, this would be our base for the next two nights as we continued our exploration of the sierra.

We rejoined our group at 5pm, and set off high into the White Mountains for the Ancient Bristlecone Pine Forest. We arrived to quite the scene. We were not the only ones hoping to photograph these ancient icons for the evening. There were at least 4-5 other photographers in the area too, all wanting the same thing. These guys were great, and everyone’s communication together helped make sure we all got what we came for. The light of the moon was perfect for light painting, and that meant we didn’t need to use any other lights to add to the mix, we simply worked with our group to shoot some 15-20 second pinpoint stars as well as longer 5 minute exposures, which we strung together as a group of 12 (1 hours’ worth) so we could make them into start trails later in the workshop.

A few folks brought bottles of wine to share with their new friends, and everyone had an amazing time just socializing with the group and our new friends, and waiting for our hour of exposures to end. The time really flew by. Because the Sierra has the best light in the morning, we insisted our group get up to head out for sunrise... it was tough but most of the group was up to it and we met 5 hours later to depart for nearby North Lake for some more magical morning light.

Sunrise was again quite nice, the reflections of the lake were wonderful, and though the water levels were too high to cross the river, we made the best of it from the side we could access, and all were happy with the shots they got. We even found a full beer in the creek waiting for us. Though nobody was brave enough to drink it at 5am. 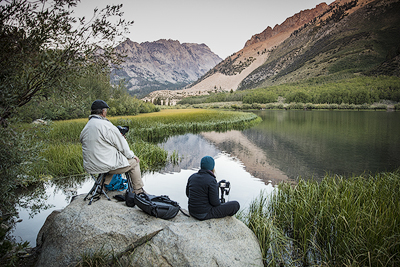 After sunrise, everyone earned a much needed break, so we all went to our respective rooms to crash out until 4pm... when we met up to depart for a visit to Lake Sabrina and a return trip to North Lake to visit the other side and shoot sunset.

Sunset at North Lake was AWESOME... a monsoon storm was on the way in, and that meant dramatic light and clouds... plus add in a killer reflection, and you can be assured everyone was giddy with the shots they were collecting. The light seemed to go on forever... and though the mosquitos were a bit annoying, we powered through to get that good light.

That night the happy group all went downtown to a local brewery for dinner, a cold beer, and a lot of conversation about photography and art. What a fun way to end a great day of shooting... but there was still one more!

Once again we decided to take everyone out really early the next day so we could shoot our final sunrise in the crazy Alabama Hills. These hills at the base of Mt Whitney have been used for numerous western films, sci-fi movies, and lots of truck commercials. 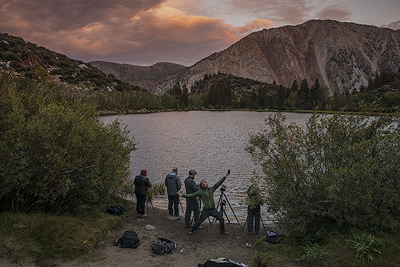 The rocks here are being constantly weathered by wind and water, so they’ve taken on very unusual, bulbous shapes, and scattered within the area are numerous crazy arches. The most popular arch, Mobius Arch was already occupied when we arrived, so we moved up to a higher plain in an area I love. Here a section of barrel cacti have made their home, and these crazy little plants make for great foregrounds... and the higher elevation gives a better view of them many layers of crazy rock formations that make up the Alabama Hills. A ton of clouds still lingered in the area from the storm the previous night, and the gap on the horizon let us all know it was going to be a spectacular light show... and boy was it. It looked for a minute like the clouds might block the sun, but it eventually popped through and left crazy pink light on the peaks, and warm golden tones throughout the clouds... we had already gotten the whole group set up for their shots, so when the light hit there was nothing to do but watch them collect shot after shot of amazing light.

After the sunrise was over, we returned to Mobius Arch, and set off on a small hike so the group could capture some images of it... while there was no more light left, there was plenty of tonal value, and these shots would make terrific black and white images. We always end this workshop with a couple hours of processing tips and techniques. Here we show folks how to stich together their star trails (which turned out AWESOME) and also how to make the most of the various lighting challenges we encountered over the weekend. It was really fun to see all the images the group came away with, and help them make the most of their images.

It was a really fun weekend for Mike and me. We enjoyed seeing some old friends, and meeting some great new folk as well. We can’t wait to do it again!