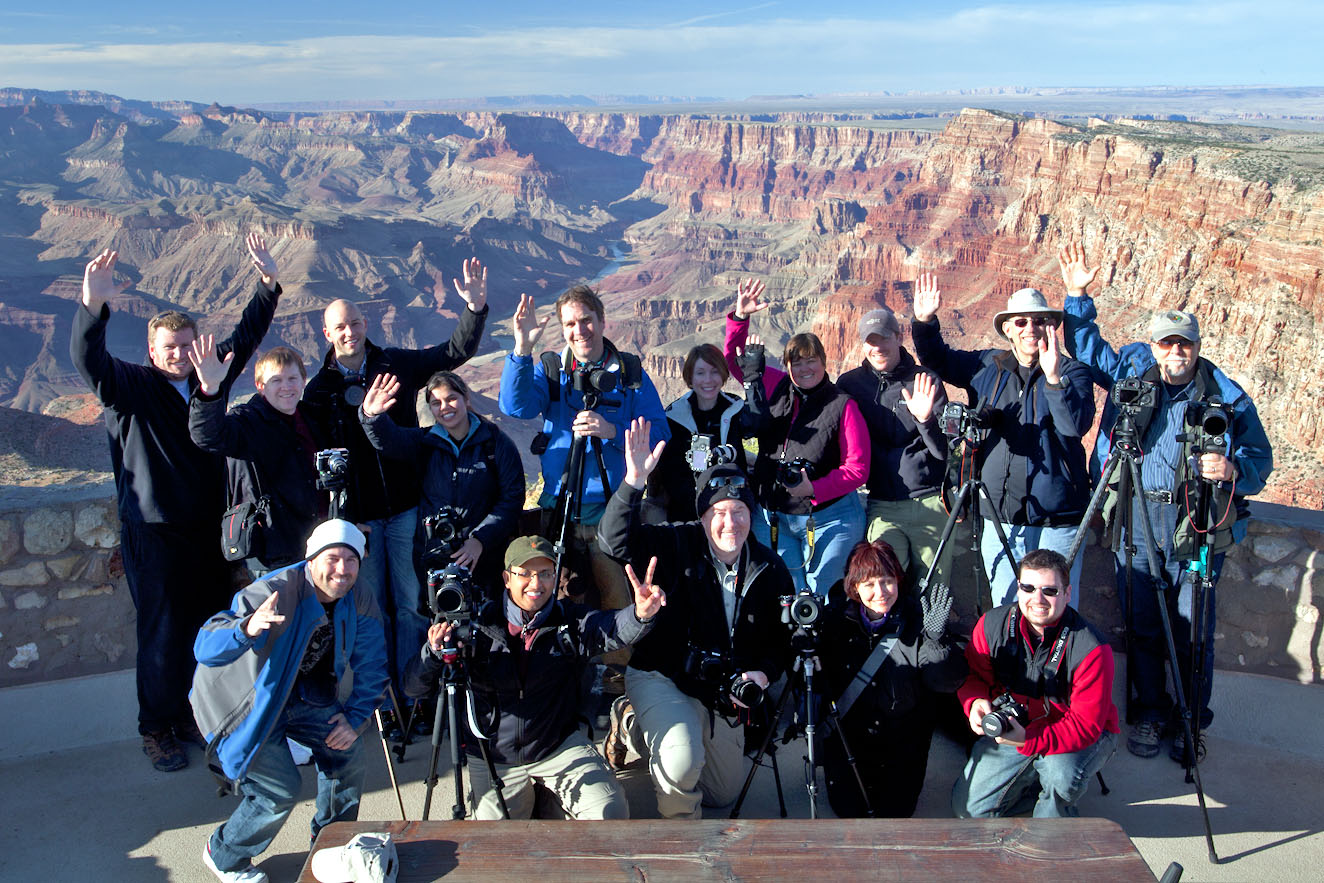 They call it the Grand Canyon for a reason...when you first walk up to the edge and peer over a mile into the depths of the earth, you can't help but feel overwhelmed and express a "wow" or "ohhhh," which is what many of our photography workshops participants experienced on this weekend.

The first day we loaded up 14 eager students into ApCab, our luxury passenger van designed specifically for such journeys into the field. We departed at 6:30am and made the drive to Page, Arizona -- first stop, Lower Antelope Canyon.

Antelope Canyon is a very narrow sandstone canyon carved by centuries of wind and water that descends deep underground. The smooth, orange sculpted walls are dimly illuminated by the light from above and on this morning, the partly cloudy skies made for some of the nicest light we'd ever seen in the canyon.

Over the course of the next two hours we explored the canyon, stopping frequently to photograph the many curves and narrow passageways, all the while learning how to achieve good exposures in such low light. Aperture Academy instructors Stephen Oachs and Kevin McNeal worked to teach students the best aperture and shutter combinations, as well as compositions to get the most out of the beauty Antelope has to offer. 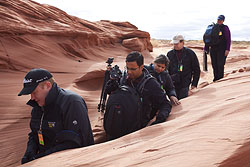 As the noon hour approached, the sunlight was making for harsh light, so with dozens of great images and hungry students, we decided it was time to climb back out of the canyon and head into town for lunch...the vote, Mexican!

As we finished lunch we saw that a rain storm was moving into the area. Hoping it would pass quickly, we decided to proceed to our next destination, the HooDoo toadstool formations. We parked, broke out some umbrellas and decided to try the trail...about half way the rain continued to come down, harder and harder, and the trail was becoming very slippery and muddy so we retreated to the van and back into town to check the latest weather...time to decide the best plan of action. 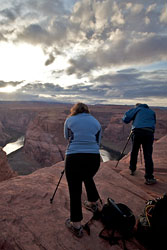 With some downtime, a coffee break and good weather information, we decided to head to Horseshoe Bend for sunset, and what a good decision it was! As we approached the rim of Horseshoe Bend, again you could hear the "ohhh wow"s from the group. It is truly another breathtaking vista that has to be seen to be believed. Everyone carefully setup their gear near the edge of this 800 foot deep canyon and within about 30 minutes we began to capture some of the best light of the day. The storm that had held us up earlier was now breaking up and the last light of the day was piercing through the horizon and creating a pretty dramatic sky. Students worked on a variety of compositions using polarizers and GND filters and we even worked with some people to teach the best techniques for taking panoramic images.

Just as we thought the shoot was over, the slightest hint of pink color appeared on the horizon. We decided to give it a couple more mintes and WOW it was worth it. Giant bands of pink lit up the clouds right over the canyon making for some really nice last minute images before we hiked out and made the drive back to the Grand Canyon.

The next morning we departed in the darkness, on our way to the South Rim of the Grand Canyon for sunrise. We arrived at Mathers Point to a crisp morning chill and a slight wind...that turned into a pretty big wind. As the sun began to rise, we worked on bracketing exposures so that we could accomodate the extreme contrast of light between the dark canyon before us and the bright sky on the horizon. We worked with students to include elements near the canyon edge to illustrate near/far compositions.

With the sun up, we turned our cameras toward the nearby canyon walls that were now bathed in the warm, early morning sunlight. We used smaller apertures to ensure a good depth of field for sharpness throughout our images.

The cold morning had taken its toll and everyone was ready for some warm coffee and breakfast, so off we went into the Grand Canyon Village for just that.

After a short warm up break, we headed deeper into the South Rim to explore the Lipan and Navajo overlooks. The sky was full of high wispy clouds and really helped us create some great compositions. The blue of the sky, combined with the red canyon walls and green trees, gave us so much great color to work with! We adjusted white balance settings to ensure what we saw on our preview screens was representative of the scene before us.


After a mid-day break for lunch and a nap, the group gathered with laptops and some of their latest images from the last two days of shooting for some post processing guidance. So many great images had been captured and now it was time to process them with basic techniques to allow them to get the most out of their images, and prepare them to print if they chose.

For the afternoon, we headed to the jewel of the South Rim...the Watch Tower at Desert View. This place is amazing and we spent an hour exploring and photographing the tower. This was one of the best stops of the day and we really had a good time finding unique compositions and working with different types of photography, such as fisheye and macro.

With the sun just 30 minutes from setting, we made the short hike to the west of the tower and found some great old trees we used in our compositions with the tower. As the sun set, the right late day light created a warm, brillant landscape for everyone to capture. We again worked with higher apertures to ensure a quality depth of field and many of the compositions the students were coming up with were very creative and interesting.

After the sun had set, we packed up and returned to the lodge for a celebratory dinner with drinks. A great time was had by all and it really was such a great group of people. We had a lot of laughs and it was great to see everyone learning so much while still having a good time and coming home with many great images to share and be proud of!

Stephen, Kevin and the rest of the crew at the Aperture Academy.