The Grand Canyon is classified with such places as, Mount Everest, Great Barrier Reef, and Victoria Falls, just to name a few. What they all have in common is being classified as one of the seven natural wonders of the world.

Carved over thousands of years by the mighty Colorado River, the Grand Canyon spans up to 18 miles in width and 277 miles in length. The depth of the canyon is perhaps it's most talked about feature. The awe-inspiring depth of 6,000 feet exposes nearly two billion years of the earth's geology. Over 4 million people visit the park each year, to bask in the natural wonder.

On this beautiful day in October, Aperture Academy instructors Ellie Stone and Scott Davis welcomed nine eager students to this iconic Americana destination. Before all the photography fun began, Scott and Ellie met up with the students over a nice glass of wine for introductions and orientation.

Getting to know everyone's expectation and skill set is key for the instructors. Some students want to work on compositional skills, while others want to get more proficient on the technical aspects. The instructors listen carefully, to ensure that the workshop meets all the student's expectations. After a brief overview of the next two days was over, the group turned in for a restful night's sleep. 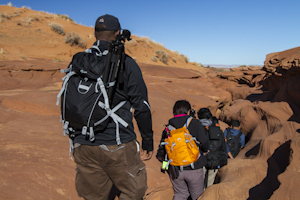 The first day started out with a bit of a lengthy drive, but the destination is well worth the effort. In the Navajo nation of Arizona lays an amazing gem, Antelope Canyon. Our destination was the Lower canyon, and this is not just a canyon, but also a slot canyon. Upon first approach is appears to be a crack in the ground. (We are going in there? It's just a crack!) But, as you descend, the opening gets a little wider, not much, but enough to fit through, if you didn't indulge on a big breakfast. Kidding aside, this place is simply surreal.

Scott and Ellie led the group into the canyon during the best lighting conditions. The narrow passageways displayed colors of purples, oranges, yellows, and reds. Textures and shapes were at every turn. This place is truly a photographer's dream. 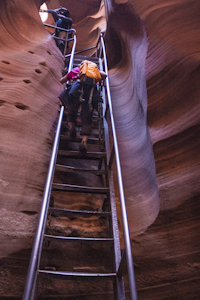 The instructors assisted with tripod set-ups and gave some compositional assistance, as well as directing to the proper aperture settings, to achieve the best depth of field. Scott and Ellie offered assistance, but also allowed everyone to explore on their own. The local tribe who manages Lower Antelope Canyon, allowed us to stay in the canyon for two hours. The time went by so fast, but all the students captured some unique and fascinating images.

Ellie and Scott took the group into the town of Page, AZ, for a well-deserved lunch. Talk over lunch drifted to photography and the amazing experience of that morning in the slot canyon. After lunch, they moved on to another interesting and unique location, just outside of Page and over the border into Utah. 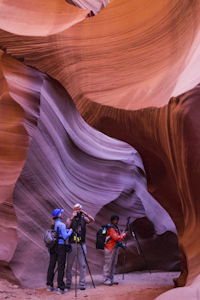 On the outskirts of Escalante Grand-Staircase National Monument are some interesting formations, called hoodoos. These rock shapes are formed when two types of rock are layered on one another. Harder, less erodible rock on top, and softer rock underneath. The results are a shape that looks like a type of totem pole, or a column wearing a hat. The colorations differ, which makes them fantastic photographic subjects.

Scott and Ellie, while continuing to check in and offer advice, let the students roam around and get their own creative juices flowing. Ellie demonstrated the technique for capturing sun-stars, along with their hoodoo shots. Time seemed to pass quickly, as it does when you're truly enjoying yourself. The instructors gathered everyone and they took the short walk back to the van, for the short drive to the sunset location.

This was no ordinary sunset location, but one of sheer magnitude. Horse Shoe Bend was formed by the meandering Colorado River, as its shape is just what its name implies, horseshoe shaped. After a short jaunt and a small hill, there it was. A large drop off and the famous curves revealed! 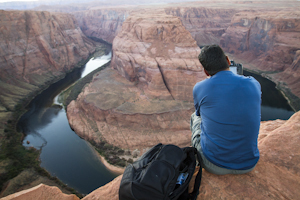 The instructors had talked to all the students about not venturing too close to the end. While the view is stunning, a fall off the edge would be fatal. All where not only giddy, but exhilarated, by the sheer magnitude of the scene.

Scott and Ellie helped everyone set up at a safe and compelling vantage point for their shots. The use of graduated neutral density filters, helped to balance the brighter sky from the somewhat darker foreground. The group hung out and photographed until the last of the day's light faded. LCD screens lit up with some fantastic images. Scott and Ellie escorted the group back to the van, which wrapped up an amazing day of photography and fun. 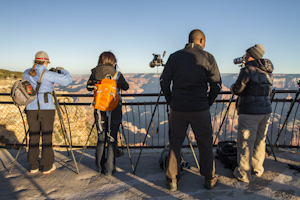 The second day began with a truly iconic view of the Grand Canyon. The instructors led everyone out to a stunning viewpoint and set them into position for capturing the light, as it transitioned onto the canyon walls. People come from all over the world to visit the Grand Canyon, and most rise early in order to witness this glorious sight.

Scott and Ellie were sure to get everyone in place before the throngs of tourists transcended on the canyon trails like locusts. As the sun's rays illuminated the red rock of the canyon, shutters clicked in rapid succession. Smiling faces glowed by the soft, warm, morning light. It was truly a sight to behold.

The group continued to photograph even after the masses retreated. As the warm light gave way to brighter conditions, it became a good sign that it was time to take a breakfast break. Some hot coffee and a little treat, and the group was eager to get back out and continue photographing. 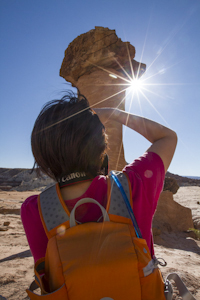 They walked around the South Rim trail, while the instructors pointed out some unique lighting and compositional aspects to consider incorporating. A plethora of image capture and some fun antics, and it was already lunchtime.

An afternoon break, just long enough for a bite to eat and a power nap, and it was once again time for photography. Scott and Ellie took the group around to some interesting places along the rim for some more creative teaching tools, and then it was off to the last spot, Desert View.

With a gorgeous vantage point that showcases the old stone watchtower, Desert View was the final sunset destination. Layers of canyon and the snaking Colorado River below offered some stunning compositions. Graduated filters once again came into play, in order to achieve a balanced exposure in camera. The students were definitely getting full use out of all of their equipment. 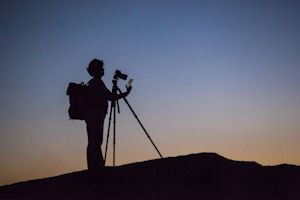 As the sun set, there remained some beautiful colors, accentuated by some smoke in the air from a forest fire. The smoke hugged the rock formations and added an interesting and unique touch to the images.

The last of the golden light faded, and the first stars started to appear. This was almost turning into a night photography workshop. It was hard to pull the students away, as the dark sky made the stars appear beautifully bright.

Scott and Ellie collected the group for a final time and they piled into the van for the return drive to the hotel. After a round of farewells, another successful workshop was in the books.