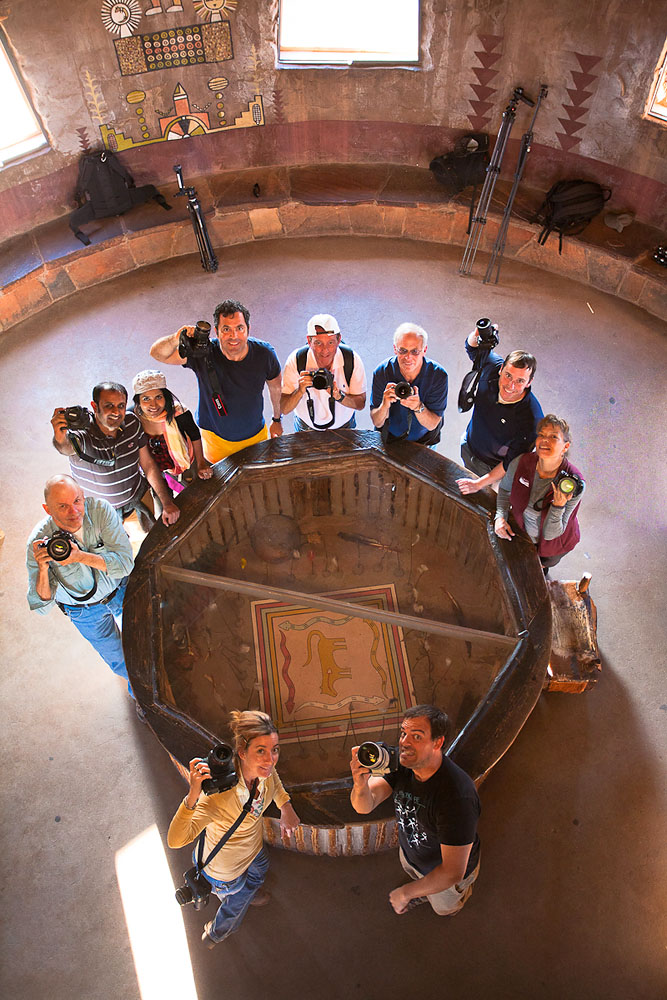 Arizona, The Grand Canyon. One of the most iconic natural wonders of the world and by far one of the most recognizable places in the American landscape. There are 277 miles of vistas peering into every crevice, crack and butte of the canyon formed over 17 million years ago by the waters of the Colorado river. It truly is a Grand Canyon, The Grand Canyon, to be specific. This massive National Park is one of the most visited as well with over 4 million entries annually, second only to The Great Smoky Mountains. The Aperture Academy became part of this statistic on a beautiful weekend in October 2011 with Professional Instructors Scott Donschikowski and Ellie Stone.

With orientation the night before in the lobby of the hotel, Ellie and Scott shared the itineraries and stories of the locations the group would be shooting throughout the 2 day workshop. The trusty ApCab was on hand, just fresh off a tour from Arches National Park, so the group would be enjoying the luxurious digs of our trusty steed. Saturday morning wakeup calls around 5:30 am gave everyone enough time get dressed and meet in the lobby once more, to load up the van and head 2 1/2 hours north into Navajo Indian land to capture another wonder of the American Landscape, Antelope Canyon. 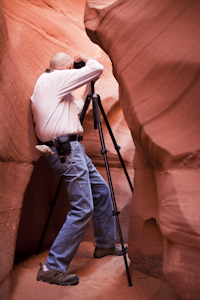 Antelope Canyon is a slot canyon which is a narrow canyon about 50-100 feet deep in places and only about 2-20 feet wide at the bottom. It is a surreal experience entering the canyon for the first time; corkscrewing rocks, narrow passageways, beautiful red formations and striations are all abound walking the canyon floor. It is a breathtaking place to photograph and can be exceedingly overwhelming. Ellie and Scott took the students to 3 of their favorite spots (eagle bison and rose) and then doubled back to the entrance to do some sand throwing for the students to capture some light beams. After our 2 hours were up, we headed out, back into the van and into Page AZ for a meal and a well deserved break.

From Page, the group traveled north again into Utah and into the southern tip of Escalante National Park, to photograph some toadstools, or hoodoos. Hoodoos are weird looking tall spire-like columns of rock. The columns are thin and softer rock than the top which is less easily eroded; this gives the impression that this rocks are wearing hats. Bryce Canyon in Utah is the most well known for its hoodoos. Once parked, everyone grabbed their gear and walked the 1 mile trail to through the drainage basin until we came to the plateau where our hoodoos were resting. For about 2 hours our students explored the hoodoo plateau, eagerly jumping from one place to another to document the area. Ellie and Scott again were on hand to share some tips on how to capture these majestic formations. A little sun star here or there peaking out from the base of a toadstool was a cool effect everyone came to try. With the weather beating down on everyone however, we had to tread back to the van for some much needed shade and a little rest before the last stop of the day; Horseshoe Bend. 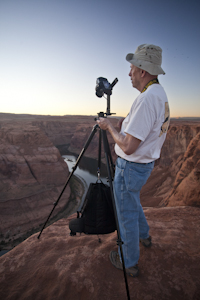 Located just outside the city of Page, is a little known hill, beyond which is one of the most terrifyingly beautiful landmarks of the desert southwest. The Colorado river makes its way south from the Glen Canyon Dam and carves its way into a 1500 foot deep horseshoe bend, aptly named for its geometry. Words cannot share the feelings of excitement, wonder, and sheer terror that comes from stating at the rim. Sadly, people often die here from not respecting the danger of such a vast open space, and so our instructors paused briefly before exiting the van to go over safety protocols to our students. Once everyone made the trip down to the bend and setup tripods, we waited for the magic of the sun eclipsing the plateau beyond. Ellie and Scott doled out neutral density filters and talked about panoramic merging to those who just couldnt quite fit the entirety of the bend in one shot. We stayed at the bend into the sunset and the break of blue hour, we decided it best to hike back up the hill and into the van for the arduous 2 1/2 hour ride to the comfy beds at the hotel. Day one down, with flash cards full of the Grand Canyon areas most beautiful but not oft traveled locations. Day two would bring the Grand Canyon proper a lot closer.

Day two of our Grand Canyon Region workshop was underway just before the sunrise. Part of capturing compelling images is being in the right place at the right time. As photographers we are always checking the weather report, as well as the sunrise and sunset times. This allows us to have the best odds of capturing those stunning well sought after images.

All the students where eager and willing to head out pre dawn, with Scott, Ellie, and Jean to Mather point at the South Rim of the Grand Canyon. If you’ve never seen the sun rise over this natural wonder of nature, it should be an addition to your “list”. As the sun rises over the canyon’s East rim, the golden light illuminates the red cliffs below. Instructors assisted the students with some different compositions to capture the light, shadow, and grandeur displayed in front of them. The use of graduated neutral density filters worked extremely well to balance out the exposure in camera. All the students got to experience the use of these filters first hand, and were extremely pleased with the results.

After all the golden glow faded, the ApCad instructors drove the happy group down to another section of the park for a quick coffee break and discussion.

Batteries recharged the photographers meandered around the rim trail. The instructors encouraged students to try different lenses, in order to gain a closer and more simplified view of the vast canyon. During their walk, one of the students wondered why some folks were gather and pointing excitedly. Turns out a group of Mountain goats grazed just feet below. 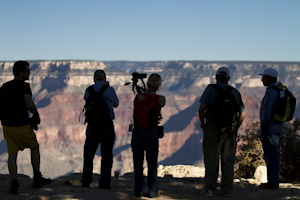 What a treat for this giddy group of photographers. The instructors made sure everyone had their longest telephoto lens on and helped with the proper settings to capture these beautiful animals in sharp detail. The wildlife encounter continued for a good 20 to 30 minutes, allowing everyone to walk away with some stunning shots.

After all the excitement of vast views and wildlife photography, Ellie, Scott, and Jean, changed the student’s point of view by having them focus on some intimate details at the Hopi House. Built in 1905 as a living museum that housed Hopi artists, allowing them to create and sell their work in one beautifully architected dwelling. The details and architecture are truly a treat to capture. Students learned how to change focus from a wide view entailing immense depth of field, to small details that are often highlighted by a shallow depth of field. Inside the Hopi house is a modern day gift shot, with new as well as older gifts and art. Some souvenir shopping was definitely in order.

After all the excitement of an early morning of shooting, all where ready for an afternoon break, a bite to eat and a power nap. We still had one more stunning location to cap off an amazing weekend. 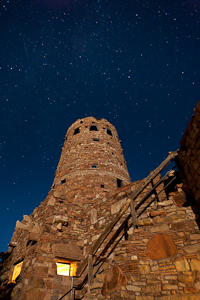 Well rested and eager for more, the students loaded up their gear into the Aperture Academy van for one final photo voyage. Last on the agenda was a gem of the south rim, Desert View Point. Along with the spanning vistas at Desert View is a 70ft high stone tower, called The Watchtower. This four-story structure was completed in 1932, and was designed by American architect Mary Colter. Mary also designed the Hopi House, as well as other iconic buildings in the park.

The inside of the tower is adorned with beautiful murals painted by artist Fred Kabotie. Scott and Ellie encouraged the students to try many points of view, including lying down, to capture the interior upward spiral. Warm tones, geometrical shapes, and natural light, made for some different and compelling images. Time seemed to fly by and the sun was getting lower in the west sky. Scott set up a group shot that would commemorate the fun and informative weekend.

It was time to set up for the final time. The instructors picked out the perfect spot. From this vantage point there were three different areas of the canyon to capture. One included the watchtower and canyon vistas. Another included the Colorado River, snaking through the canyon below, leading up through the cliffs to a beautiful sky. Last but not least was a view that included depth and layers of canyon cliffs and a delightful orange glow from the setting sun. Once again the instructors assisted with composition options and the use of graduated neutral density filters. As the final bit of light faded, and memory cards filled to capacity, it was time to bring this amazing weekend photography journey to a close.

Scott, Ellie, Jean and the rest of the crew at the Aperture Academy.