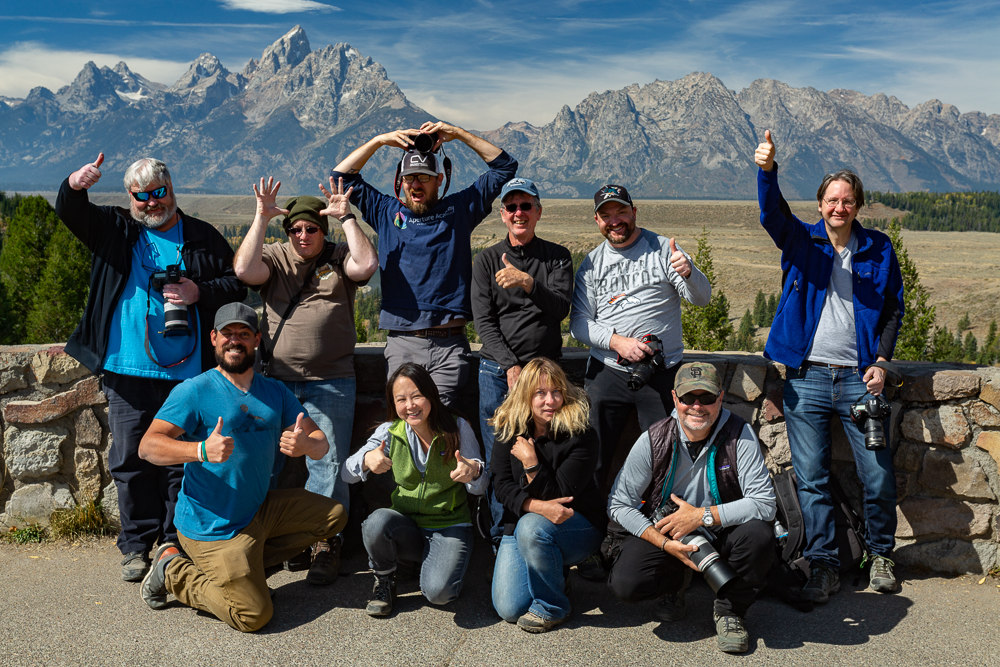 I get asked fairly often what my favorite National Park to visit is. Of all those I’ve been fortunate enough to see, I think Grand Tetons is up there. Grand Teton has it all in a nice little package. Grand mountain peaks are surrounded with awesome lakes showcasing their awesome size with wonderful reflections, and forests. The forests here are a combination of wonderful pine trees in the higher elevations, and colorful aspen and cottonwood trees in the flats and valleys. An amazing river “snakes” throughout the park offering refuge and sustenance for the abundant wildlife. The flatlands offer grazing pastures for larger mammals, and early settlers have built numerous photogenic barns here to give eager photographers something amazing to point their cameras at.

Scott and I always love guiding a group of people in this park. It’s a great split of wildlife and landscape shooting. We spend our sunrises and sunsets photographing this awe-inspiring landscape, and the rest of the time we spend cruising the back roads and river areas looking for the animals that call Tetons home. 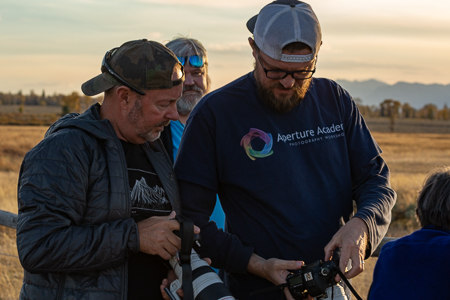 Our group was excited to see the park and after a Wednesday night orientation we sent them to bed with instructions on our morning meeting time and first locations. Early Thursday morning we loaded up the van and set off for our first stop of the trip, the Moulton Barn. This barn located on Mormon Row has become an absolute icon of the park. We arrive early so we can secure great spots to shoot. The forecast called for flat blue skies all day, so you can imagine how giddy the group was to see a nice bank of clouds situated right above the Tetons. The horizon was clear as a bell, so everyone KNEW we were in for a wonderful first shoot.

Once on the scene Scott and I helped everyone get his or her settings and composition dialed in, so that once the light show started everyone was ready. The show did not disappoint! Great color, and light surrounded the scene, and everyone let their lenses soak it up. We encouraged folks to do 2-3 shot panoramas as well to give their collection more options. It was an amazing time. The rest of the morning was awesome as well as we scouted the area looking for animals and stopped to photograph the Tetons with some dramatic light and a herd of buffalo passing through. We saw a mother moose and a few black bears foraging for berries along the popular Moose-Wilson road. The beauty of this park is that you can go from shooting the landscape hot spots to deep in prime wildlife habitat all within 20 minutes. 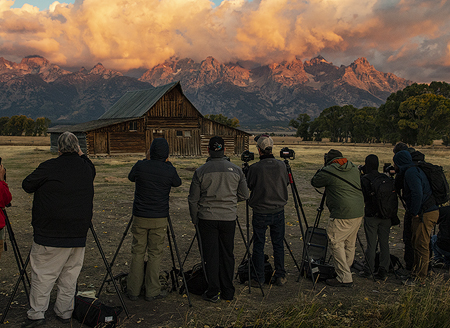 Our evening shoot was spent at the popular Schwabacher Landing. This spot, while more popular for sunrise is also a great place to utilize fall color and slow meandering river views with the drama of the mountains. This location is also great for seeing the occasional moose or elk wander through the scene. Our luck continued here, weather wise….we had some great clouds and color to work with.

Day 2 we started out at Oxbow Bend. This section of the Snake River is wide and slowly moving which means it offers up reflections and colors that are worth photographing. Here we set up and point our cameras towards Mt. Moran another iconic peak in the range. This is also a great spot for wildlife, and as we set up in the cold, dark morning, we could hear the occasional bugle of a bull elk as he moved his harem of cows from the flats to the mountains. Our clouds from the previous day had vanished, leaving behind a very nice warm glow in the sky. This salmon light looks awesome in photos where you have some nice reflections to work with.

The rest of the day was spent working on finding more wildlife, and also we spent some time teaching our group how to make fantastic impressionistic abstracts with aspen groves and slow shutter speeds. Everyone had a lot of fun with this…the only sad part is that whenever you pull over in this park, and have a large group of photographers out…everyone thinks you’ve seen a bear or moose. We had car after car stop to ask us what we were photographing. Once they knew it was just trees…they often got back and squealed off in disgust. Everyone wants to see a bear. 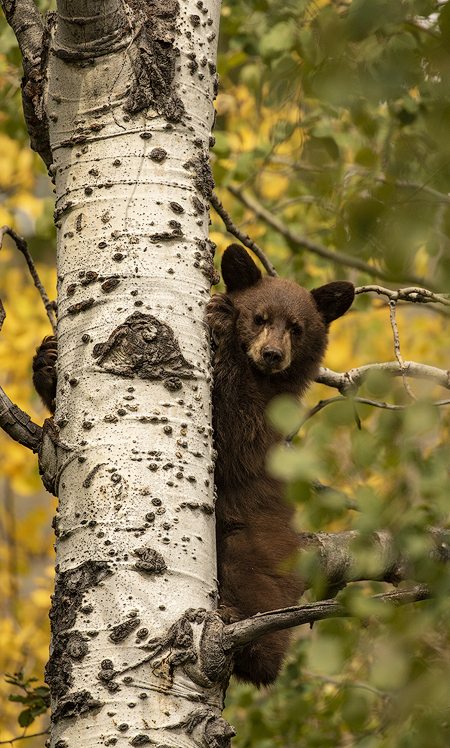 Speaking of bears, I think we saw more black bears on this trip than I’d ever seen before. I counted 7 bears on the moose Wilson road over the course of the three days. This stretch of road is often great for black bear viewing due to the ample bushes filled with Hawthorne berries. The bears are constantly on the move to find more food so they weren’t always cooperative with the camera…but just seeing them is awesome. We also spent a little time at an old abandoned log cabin, which gave the crew a little bit of time to work on some monochrome imagery.

That evening we set up in the willow flats area to photograph a great panoramic vista of the Tetons, and watched from afar as elk meandered through the flats carrying out their annual mating rut.

The final morning came QUICK…how time flies when you’re seeing awesome things all day. We started out at Schwabacher Landing. It was fun to see it at sunset, and it gave the group a little idea of the layout of the location, so they knew what they wanted to shoot for sunrise, which is the prime time to be here. Again the forecast called for flat blue skies, and we were treated to some awesome clouds in the sky…the lighting here was amazing as well and everyone got some really nice stuff. We also made a stop at the Ansel Adams iconic, Snake River Overlook. While the trees have grown up a bit since Ansel was alive…the shot was still awesome…and in black and white everyone had a little shade of Mr. Adams in their images.

Our afternoon was spent doing some processing in the hotel…and by the looks of those computer screens everyone got some outstanding images. With work like this it was easy for Scott and myself to give a few little tips and tricks so they could get the most of the images.

The final afternoon we saw bears, a bull moose, a coyote, and were able to get some nice images of all them. We spent some time as the sun dropped photographing a male antelope in the evening sun…the light was great and the images were very nice.

This time flew by, and 3 days came to a close. Everyone saw most of the animals they wanted to see, bears, moose, antelope, coyote, and one of the most epic chipmunk shots ever. We got great light almost every time we pulled over to get a landscape image…really we couldn’t have drawn it up much better if we tried.

What a FUN time...thanks to everyone for a great trip.

Brian, Scott, and the rest of the Aperture Academy Team!