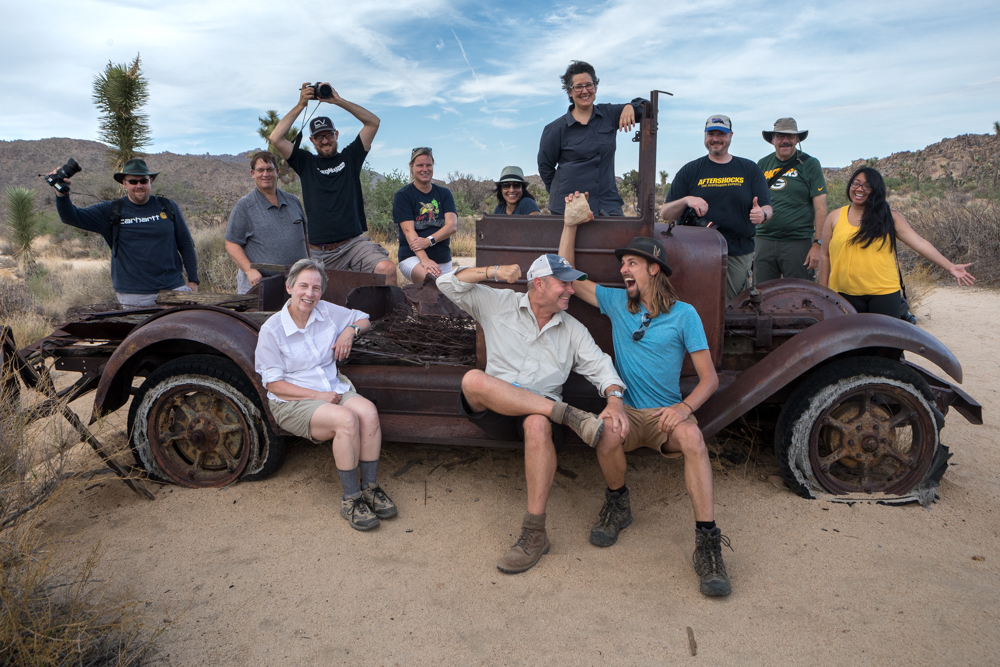 I love a good challenge, and photography can certainly bring about challenges...landscape photography is not always easy to do. Sometimes a place is relatively easy to make good photos. Yosemite for instance has huge iconic peaks, and rivers, and waterfalls...each begs to be photographed...and offers up a pretty decent starting point to do that effectively. There are some locations, however, that make finding decent compositions much, much more difficult. Joshua Tree National Park is one of those places.

Mike and I met our group in the military town of 29-Palms, the gateway to Joshua Tree National Park. The heat of the summer, and long days makes for more challenging photography...but late summer is monsoon season in the southwest, so we always hope for mother nature to deliver us some crazy drama in the sky. Orientation is brief, with a 5am departure time to get in the park everyone needs plenty of rest.

We tell the group early on that there will be some difficulty on this workshop finding compositions...everything in the desert is very similar. The rocks all look similar, the foliage is all similar...the Joshua Trees are very similar as well...each differs usually only with very small details, or bends. We encourage the group to look small, look for patterns, look for different depths of field, try to use a zoom to compress the scene...look at shadow vs light. All these great little tips help to make sense of the chaos. We practiced these things during our first stop at Hidden Valley. We start by using silhouettes of the Joshua Trees, and their crazy shapes in the pastel morning sky....as the sun climbs higher, we shoot more intimate details, textures, and then some compressed shots...when the sun is even higher, its' looking for dark and light contrast, and black and white. These ideas stick with us as we move from Hidden Valley to Ryan's Ranch, and old adobe dwelling surrounded by interesting rocks, and cacti...the group has expressed how hard composing images is here, but they are eager pupils and Mike and I get them out really working the scene from all angles. Close ups of cacti, shallow depth of field with Yucca Plants, focus stacking some cholla cactus, all kinds of options here to make great images, that are simplified from the normal iconic. There's a simplicity to the desert and the group is eager to take the challenge of photographing it into the afternoon and night. 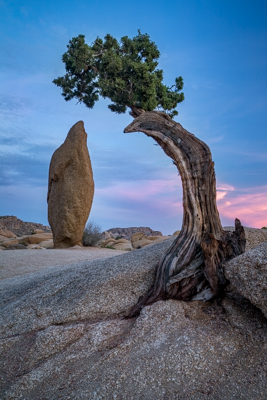 The afternoon after a break in the hottest part of the day we moved back into the park for more photography. The cholla cactus is one of the craziest cacti in the park. These little guys are often called teddy bear cactus, or jumping cactus...because the little balls of needles are so easily removed from the plant and attached to whatever it is that so much as looks at them wrong. Photographically these cacti are awesome. The light color of the bulbs and needles looks awesome backlit...and if you zoom in to compress several rows of them, you get very cool almost abstract shots that look great in color or black and white. Nobody got stuck too badly by these teddy bears, and everyone really liked the way their images looked.

Our group moved to an iconic spot in the park for sunset, Arch Rock. This little arch often gets mistaken for something that might be found in the Alabama Hills area of California. The clouds aren't in the right direction, but the evening light really warms the rock, and it looks awesome, even with a blue sky. In addition to arch rock there are a few other crazy rock structures that the group had fun photographing.

Our next goal for the night was to set up and do some night shooting...we drove to a part of the park where the crazy Joshua Trees were easier to stand out from the rocks and mountains. Here we broke the group up after some basic instructions, so that they could all find a tree to shoot. some chose to shoot the same tree, and others wandered in the desert to find one that they liked better. Mike and I helped the group to do some shots of pin-point stars, as well as take some 5-minute long exposures that we could use to make the popular star trails. This requires an hour of shooting to come up with some decently sized trails. While our cameras worked, our groups set around and told different tales, and stories. It was a lot of fun.

When our group was finished shooting their hour it was time to head back to the hotel for a good night sleep (or what was left of the night). 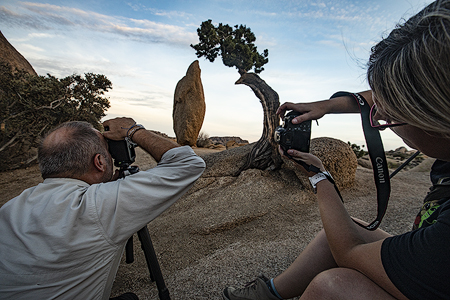 The next morning, we set off for a brief morning shoot at the 'House of Horrors' Though it sounds frightening, it's just named after a few of the more popular rock-climbing routes in the area. After a full day under their belts of shooting rocks, trees, and cacti our group was better equipped to work on compositional ideas. The clouds were better as well, so everyone came away with some great images.

Because of the late night we had the day before, we went back to the hotel after our morning shoot for some rest prior to our mid-afternoon processing session. This is always a favorite time for Mike and me. We love to see what the group has come away with and help them to make the most of it. I think everyone came away with more good photos than they probably thought when they were in the field. We saw some good stuff, including some great infrared shots one of the group members came away with. In addition to processing the individual shots the group had, we worked on the techniques to process the star trails they gathered the night before. All in all, it was a very good time looking at a plethora of good images.

The afternoon wasn't done though, we still had a few more stops left to shoot. We started the afternoon by hitting up a local metal sculptors' studio. The artist was kind enough to let us wander his garden and shoot some interesting photos of all his many sculptures and their funky shapes and textures.

The next stop of the day was the old wall street mine ruins. This little slice of history dates to the gold rush and looks awesome in black and white. A few old cars remain near the mine and offer up other subject matter to photograph.

Our last stop for the workshop is another iconic shot. Balance Rock is a great little hidden gem in Joshua Tree NP. If composed right a neighboring Juniper Tree (hey, it starts with a J) point right at this funky almond shaped rock jutting out of the stones. Our last sunset proved to have the best clouds and color as well, and everyone was patient and maneuvered around this tight little area to get a good capture of this location. What a great way to end a great trip. The clouds came out, the heat subsided and we all had a really fun ending to what had been a very fun time exploring the subtle beauty of Joshua Tree National Park.


See many more workshop photos below the comments...