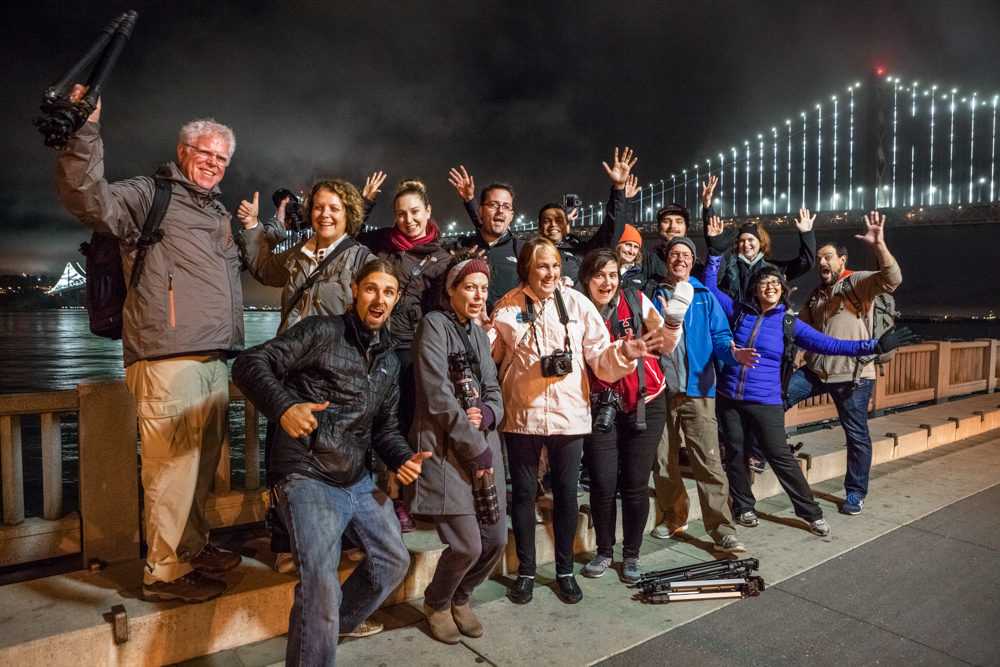 San Francisco is one of the most beautiful cities in the United States. The unique architecture, coupled with its geography, makes it a mecca for photography. It's one of the oldest cities in the west, and as a port city, it has a rich and fervent history, as well as having economic importance enough for the construction of some of the most amazing and beautiful civil works ever devised by modern humanity.

Because of its size and civil projects, at night, the city becomes illuminated with the glow of a million lights, both with gridded city streets, and with the lights of its numerous bridges and high rise buildings. At night the city becomes something completely different; awe-inspiring to tourists and photographers alike.

Once a month we make a special sunset trip into the city with a group of photographers, in order to share the experience of being a Night Owl with them, and photographing the exquisite beauty of San Francisco after dark.

That night, alongside was our newest professional photographer and instructor, Mike Wardynski.

First off, we met everyone in Sausalito, where the weather is always favorable. We did our usual round of introductions, getting to know everyone and letting them know what Mike and I had in store for them for the night ahead. Then we were off to shoot sunset.

Immediately it was abundantly clear that our old friend Karl (the fog) wasn't going to let that happen. Traditionally in summer, San Francisco doesn't have the most consistent weather; the fog (aka Karl) can come in quickly and smother everything in a thick, impenetrable soup. We were heading directly into it this night. 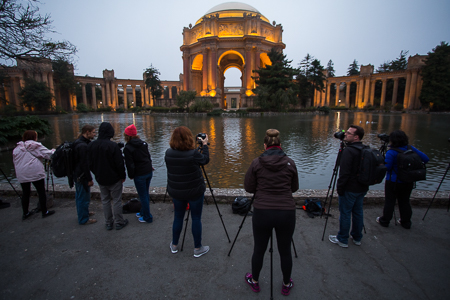 Because the fog was so thick that we couldn't see sky through it, we headed instead to the Palace of Fine Arts, where we gathered everyone in front of the reflection pool and began our instruction for the evening.

Mike and I had ample time to get each and every student set up and talking about composition and camera settings. Since a majority of students on these one-day workshops are at a beginner to intermediate level, it was nice to have enough time to go over the proper motions to make sure everyone understood the steps we take to capture the images with perfection.

As the light faded, and the lights from the Palace overtook the ambient light of day, our class was properly prepped enough to capture some great images of the Palace and its reflection, at the perfect time.

After a short break for some snacks and bathroom, we made our way further west to Lombard Street, where the curving road switchbacks eight times down a steep 27 degree hillside. This steepness, along with the switchbacks, and its popularity, are why we keep coming back to Lombard.

The sharp turns and steep grade allows one to stand at the top of the hill and look almost to the bottom, and at night with cars travelling down, using long exposures, the car lights seem to streak down to the bottom with whimsy.

Mike and I split the group in two, and each group took turns shooting at a higher and lower angle, to best capture the mystery of this quirky little street.

Our last stop of the evening was along the waterfront on the Embarcadero, looking right up at the Bay Bridge. This particular spot has got it all. The Bay Bridge towers overhead, spanning across the channel to Yerba Buena Island.

In front of us, making the foreground more interesting, there are a multitude of old pier pilings. Those things would be nice on their own, but when you add in the lightshow running down the cables of the bridge, and the calm waters of the inner bay providing reflections of all the lights, you've got something pretty spectacular for photography.

The fog even came so far into the bay that night, that it was hovering above the bridge, which was the icing on the cake, because all the lights from San Francisco to Oakland were getting reflected down by the high fog cover, and our sky was lit up beautifully. It was amazing.

Mike and I worked alongside our groups and had them trying out different stuff, like really long exposures in the minutes, to try and get the scene lit properly. But alas, we had come to the end of the line. The great part though is, despite being shutout by the fog at sunset, it was a really successful night of photography!

Scott, Mike, and the rest of the Aperture Academy crew!