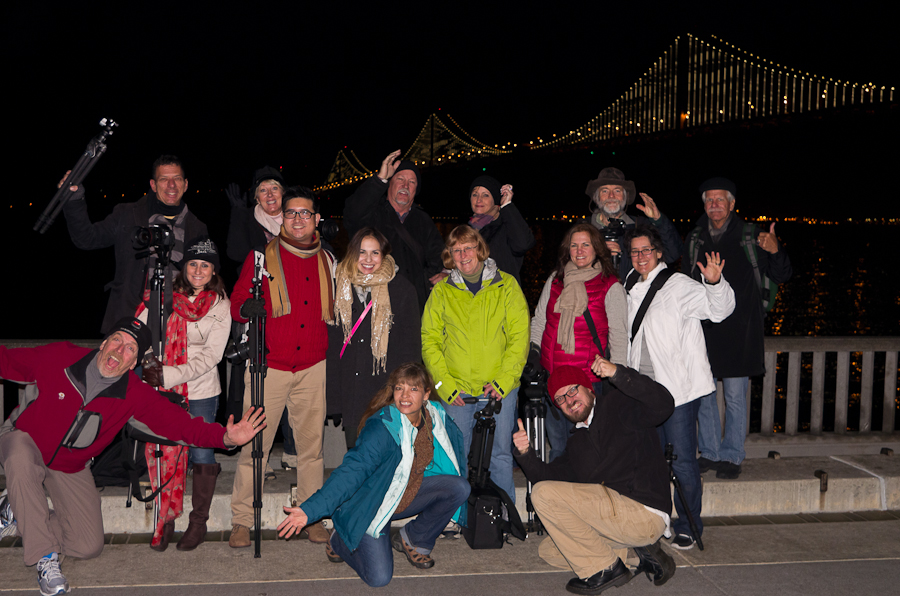 Diving into night photography can be a challenging yet rewarding creative endeavor. One's eyes open to a new world of photography only seen with the patience demanded by gathering the light in longer exposures. Aperture Academy's Jean Day, Brian Rueb and Paul Porter spent another joyful evening teaching a fun group of Night Owls students, providing guidance and patiently answering questions to help students come away with the unique imagery afforded by San Francisco's after-dark attractions.

Students and instructors started the lovely clear evening at the dramatic Greco-Roman architectural wonder, the Palace of Fine Arts. Rounding up the students in our customary orientation huddle, we introduced ourselves, getting familiar with one another, our photographic backgrounds, the cameras we were using and the technical and creative areas we wanted to explore. To start the evening, we walked to the pond opposite the Palace. Bathed in the warm glow of amber floodlights, the golden reflections of stately columns flanking the beautiful central rotunda always takes my breath away. The students set up along the pond and we worked with them to help fine tune aperture and shutter speeds for the long exposures emphasizing those sumptuous golden reflections, while also tuning their white balance to draw attention to the gorgeous midnight blues of the night sky. Getting chillier by the minute, we had to keep moving to stay warm, walking around the Palace seeking new compositions, from both afar and then up close, focusing on the vertical columns as they terminated high up in the graceful intersecting arches of the central pavilion. 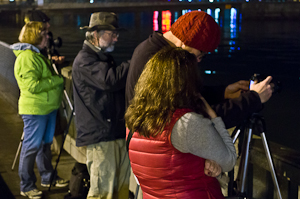 Everyone was a little chilled after the first shoot at the Palace and were thankful to have Jean chauffeur them to their next destination in Aperture Academy's comfy warm 15 passenger van. On the agenda next was the crazy twists and tight cobblestone switchbacks of San Francisco's Lombard St. The class split into two groups; Jean working with those capturing the streaking tail lights of cars heading downhill and Brain guiding the other half taking long exposures of headlights navigating the switchbacks on their way down. Halfway through, the groups switched so everyone could experience shooting from both angles, with Paul working with both groups throughout the shoot. The long exposures of the cars lights snaking their way through the "crookedest street in town" provided exciting foregrounds for the beautiful holiday lightscape of San Francisco. 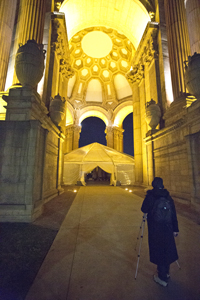 With images of Lombard Street safely written to our memory cards, it was time to pile in the van for some much needed refreshment and hot drinks. Jean dropped us at a cozy little North Beach deli cafe for cookies, coffee, ice cream and hot cocoa. Ok, maybe not ice cream, but some of us enjoyed milk shakes. That gelato sure looked yummy though.

Warm and nourished, we were only part way through the evening's adventures as we piled back in the van for our final destination, as Jean droves us to shoot the western span of the Bay Bridge's "Bay Lights" from the famed waterfront Embarcadero. The bridge's superlative light sculpture, designed by Leo Villareal captivates the imagination, as mesmerizing light patterns play across the length of the western span, from tower to tower along the vertical strings of LED's on the cables of the bridge's suspension. With the numerous composition opportunities available, Jean and Brian guided the students to a row of old concrete pilings just offshore providing a wonderfully contrasting foreground element. Reflected in the Bay's water, the play of light is almost surreal as it smooths to silky white and yellow in our long exposures. With a little more time to explore, we wandered down the Embarcadero to the fire house tugboat, adorned with holiday lights, next to the similarly decorated fire house. The Bay Bridge again provided a dramatic backdrop for some luminous holiday compositions. It was a bit of a challenge to get that tugboat to stay still in the water, but with a little work on ISO, shutter and aperture, students were able to still its bobbing for their comps.

With the chill nights of the recent Northern California cold snap behind us, we weren't disappointed as the crisp clear evening provided for a fun night of photography at some of San Francisco's iconic attractions, made even more beautiful bathed in city lights.

Jean, Brian, Paul and the rest of the Aperture Academy Team!