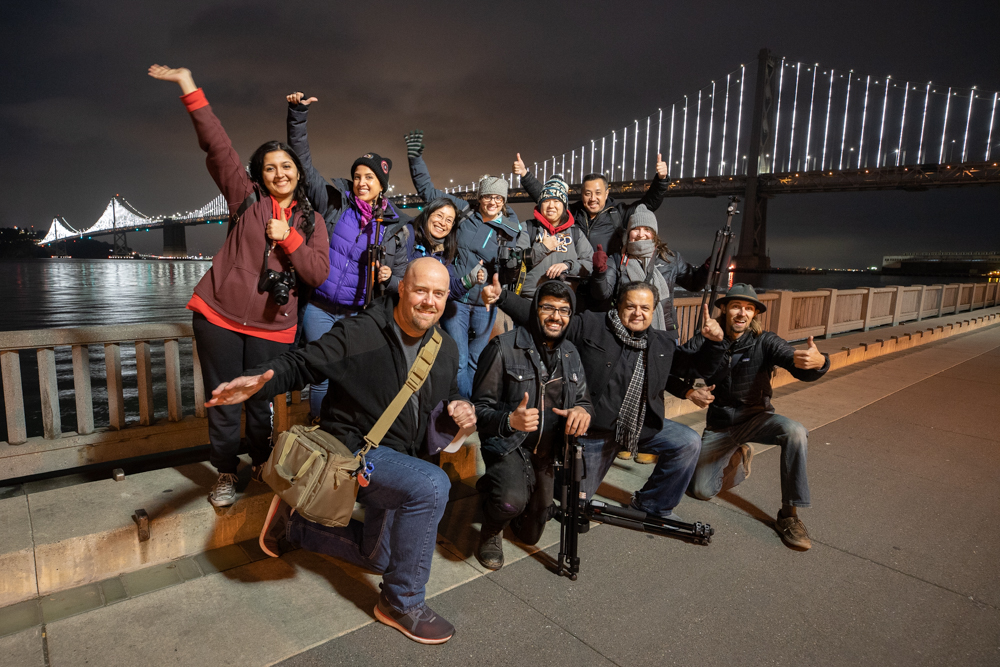 On this chilly winter evening, Mike and I met our group of nine intrepid photographers. There were new faces and a few returning ones as well. We did a quick round of introductions to get to know each other and understand the goals for the evening and then it was time to begin our adventure. We loaded up in our ride, affectionately called the 'ApCab', and we were off. The time spent in the van is often equally as valuable during a workshop as being on a location itself. It gives a chance for great conversations, photography discussions and answering any questions students have. It is also where many of the students themselves begin to form friendships that will last well beyond the workshop itself.

We left Marin County heading south and crossed the famous Golden Gate Bridge. Our first stop was the Palace of Fine arts. This beautiful structure was originally built for the 1915 Panama-Pacific exhibition. We arrived after dark and after the crowds had left. We were able to situate ourselves in a perfect position to capture the beautiful dome and grand columns as they reflected in the lagoon.

Shooting a location such as this is ideal for long exposure shots. Not only is it a lot of fun to do long exposure photography, but these techniques help create the reflection of the palace in the lagoon. Mike and I spent time talking to and working with each of the students discussing various aspects related to tripods and camera settings as they increasingly gathered better and better images. The group was happy taking numerous shots and experimenting with various compositions, but it was time to move on. Everyone got in a final shot or two, packed up their gear and headed back to the van to continue the evening's adventure.

Following a brief restroom and snack stop we were excited to head to another favorite location, Lombard Street, the crookedest street in the world! Lombard Street is a great place for learning about long exposure photography and has multiple vantage points to shoot from. Shooting long exposures here allows you to capture light trails from the cars going down the hill through the "S" shaped curves. It is also exciting because you'll never be able to shoot the exact same trail twice. Every vehicle takes a slightly different path, moving at a different speed and all vehicles have slightly different lights. There were many smiling faces again and a few "ooh's and ahh's" when the students saw the results of the long exposures on their camera screens. 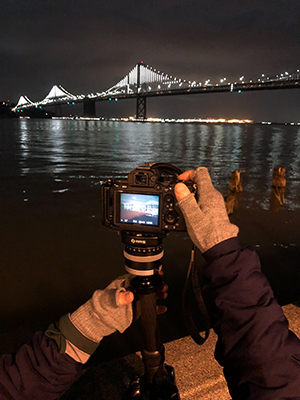 We mounted up again, this time heading for the Bay Bridge. Shooting the bay bridge from the Embarcadero with the calm bay water tonight provided outstanding results. We shot the Bay Bridge using some old pilings in the foreground as we watched the mesmerizing light art display on the bridge itself. Mike and I helped students practice with various compositions and people even squeezed in time to practice long exposures and more creativity by photographing each other, smiling and laughing the whole time. What a fun group! The Bay Bridge also served as a perfect backdrop for our group photo which is something else we always enjoy.

We were then off to our last stop of the workshop. We drove north across the Golden Gate to shoot the bridge from Fort Baker, one of the lesser used, but totally awesome vantage points. Again we talked about long exposure techniques and compositional ideas as the fast learning students were having a blast putting the techniques to use while capturing great images.

Good luck was clearly on our side tonight. Moments after loading back in the van, the clouds moved in and the rain began. As we returned to where we kicked off the evening, everyone was still completely enthusiastic with several comments being made about wanting to return to some of the places that we visited this evening. Back in the parking lot, everyone said their goodbyes and headed for their cars for the wet drive home.

Kevin, Mike, and the rest of the Aperture Academy Team