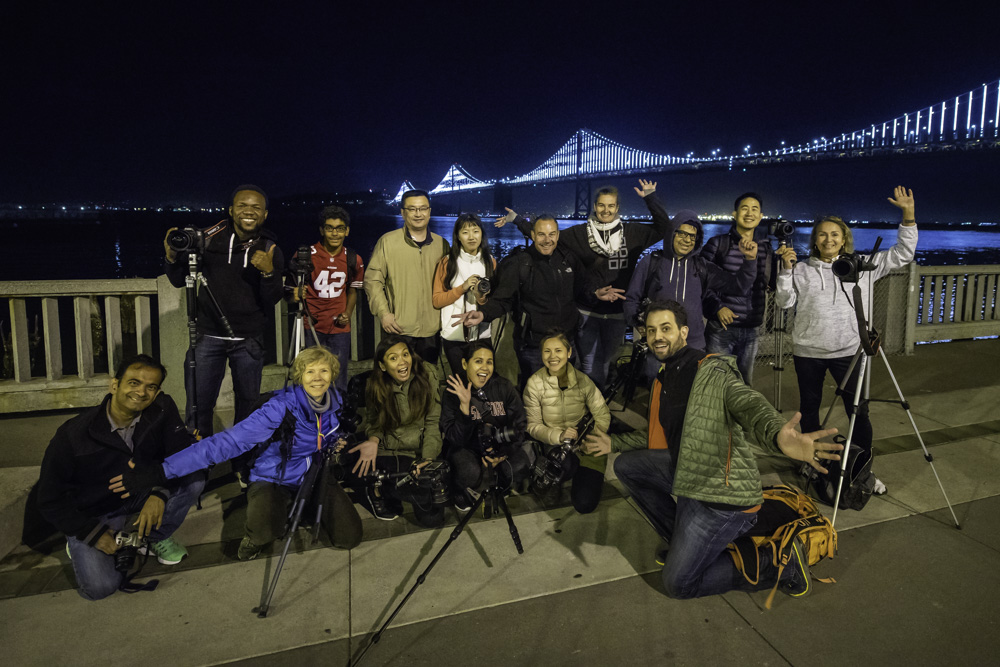 It was a beautiful Northern California summer evening, as puffy clouds floated in the skies above San Francisco. At 7pm a small group of 11 ambitious photographers met DeAnna and I in Marin ready to learn all sorts of wonderful things about night photography. After we introduced ourselves, each student did a quick introduction and told us what they wanted to take away from the workshop. Once we were all acquainted with one another it was time to cross the mighty Golden Gate and get to work.

Our first stop of the night was The Palace of Fine Arts. This is by far; this is one of my favorite hidden gems of San Francisco. If you didn't know any better, you would think that you were in the middle of Rome when looking at the Rotunda. Since the sun doesn't set until almost 9pm in the summer; DeAnna and I took our time helping everyone set up their cameras and tripod outside of the Palace explaining long exposure photography and getting ready for what would be a nice little sunset pop of color.

As the sun began to set we walked around the group and helped them to capture the blue hour with beautiful reflections of the building in the water. Eventually, the blue hour turned to night and the students were able to see the difference that light can have on a scene, going from day, sunset, blue hour and then night. 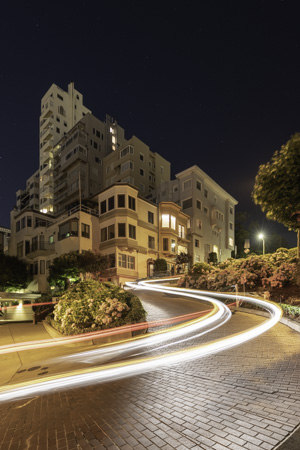 The next stop for our group of hearty photographers for the night was Lombard Street. Here we got to shoot car lights as they traveled down the classic curves of cobblestone. We moved the group up and down the street so they could get headlights and taillights, they snapped off different length photos, some being of one car and some being of two, three or four cars in a row. This location allowed students to see how they could create images with longer shutter speeds and to show things we don't traditionally see; such as car lights creating paths across their photos.

No photography expedition of San Francisco would be complete without a shot of the Bay Bridge; as in recent years it's become an artistic lighting monument with the addition of LED lights to the bridge cables. Working with longer shutter speeds; the group saw how time changes things in photography. Before it was car lights, now it was seeing choppy waves become smooth water with reflections of the bridge lights. By this point of the evening most everyone is getting comfortable with the settings, and now they focused on trying to do different things with their compositions, experimenting by changing white balances, and seeing their cameras create black and white images of the bridge and other fun things that come with learning more about night photography.

Though our time was coming to an end in SF; we wouldn't be complete without a stop at the Golden Gate Bridge...so we packed up, and set off to the Fort Baker fishing pier, where we got a water level view of the bridge from the Marin side. By this time, it was 12:30 AM, as DeAnna and I helped our well-worn group get their final shots of the evening as some of us chatted with the locals out for a late night fishing session.

Aron, DeAnna, and the rest of the Aperture Academy Team