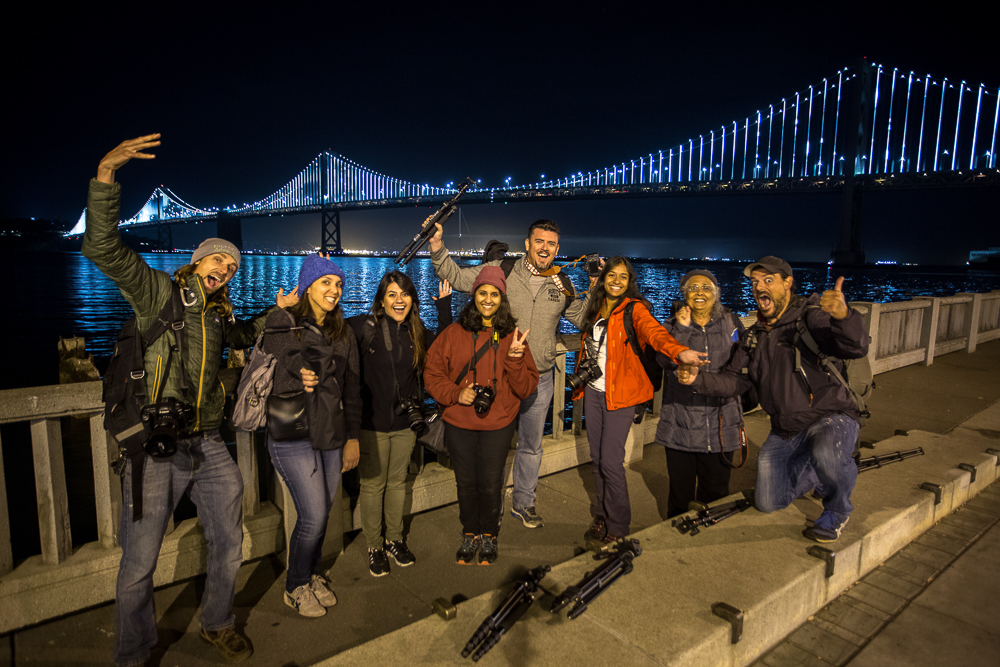 San Francisco is one of the most photogenic cities in the world. With easy access to some amazing vistas, by car, bike, or walking, the city attracts millions of tourists each year to enjoy the beautiful surroundings. But usually all those tourists disappear once the sun sets. Thats when the real magic begins, the time for the night owls! Every month, we at the Aperture Academy invite budding "night owls" to join us on a after dark tour of the city, and take in the sights from a few selected favorite spots.

In the summer with sun setting late in the day, it gives us a rare opportunity to start the workshop just before this magic hour. From our starting point in Sausalito, Mike and I greeted our group and did our orientation before setting off to our first location for sunset! What a rare sight it was too, the clouds were perfectly placed, our students primed on instruction in manual mode, and the stage was set for an amazing start to the workshop. As the sun went down over the Pacific, the sky lit up in brilliant hues of pink, purple, orange and red! From our perch atop Battery Godfrey, we all witnessed and captured one of the most amazing sunsets in many years of photographing at this location. 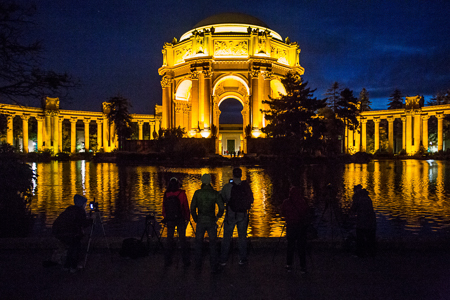 After the amazing sunset, we whipped in the van and headed for some blue hour shots at the Palace of Fine Arts. The Palace is a huge Greco-Roman inspired structure with columns and promenades colored orange by the lights illuminating them. With the blue sky overhead just after sunset, theres enough light in the scene to perfectly balance the grandeur of the orange structure with the blue light up in the sky. Mike and I spent the time working with everyone to start adjusting to shooting at night, as every minute after sunset keeps getting darker and darker, the adjustments made to the camera settings keep changing as well. Once the light was significantly dark enough that we couldnt see the blue sky, we moved on to the next location.

Lombard street is where the real mystery of night city shooting takes place. The street switchbacks multiple times in rapid succession down the Russian Hill providing an avenue of light trails as the cars drive down in front of us. Using long exposures, approaching 30 seconds, one can successfully capture the light trails of successive cars as they make their winding route down the cobble street. Mike and I first set the group up on top of the hill looking down for some shots of the reddish hues of brake lights. After 30 minutes of tourist traffic, we then headed down the hill and shot back upwards to catch the headlights and a much different perspective. 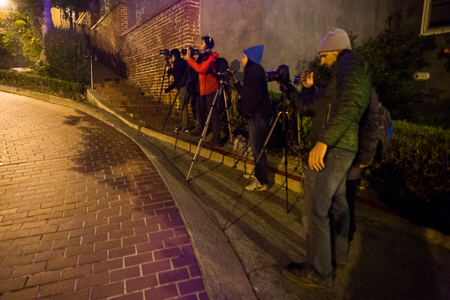 Our next spot of the evening was a classic shot of the Bay Bridge from the Embarcadero. We headed down to the waters edge, and took a quick group shot in front of the pilings and the Bay Bridge, and then we lined everyone up along the railing and began to shoot. The Bay Bridge is beautifully lit with 25,000 LEDs spanning the western section from San Francisco to Treasure Island. The lights help illuminate an otherwise black object in the middle of the bay, and the reflection of the cool lights in the water, mixed with the warm lights from Oakland, provide a perfect scenario for an amazing classic shot of the bay.

The last stop of the evening was over the Golden Gate bridge to Fort Baker. The fort sits on the southern side of the bridge an has an amazing view looking underneath the well lit structure to the Lands End area and out beyond to the pacific. By this time in the evening, the full moon was making its way across the sky and helping to illuminate the dark sky behind the bridge. With longer exposures, we were able to get the reddish hue of the bridge to mix with the blueish hues of the sky for some unforgettable photos of the Golden Gate! Sadly though, it was time to end, and after such a great night it was hard to call it quits as our adrenaline and spirits were high from such an awesome evening!