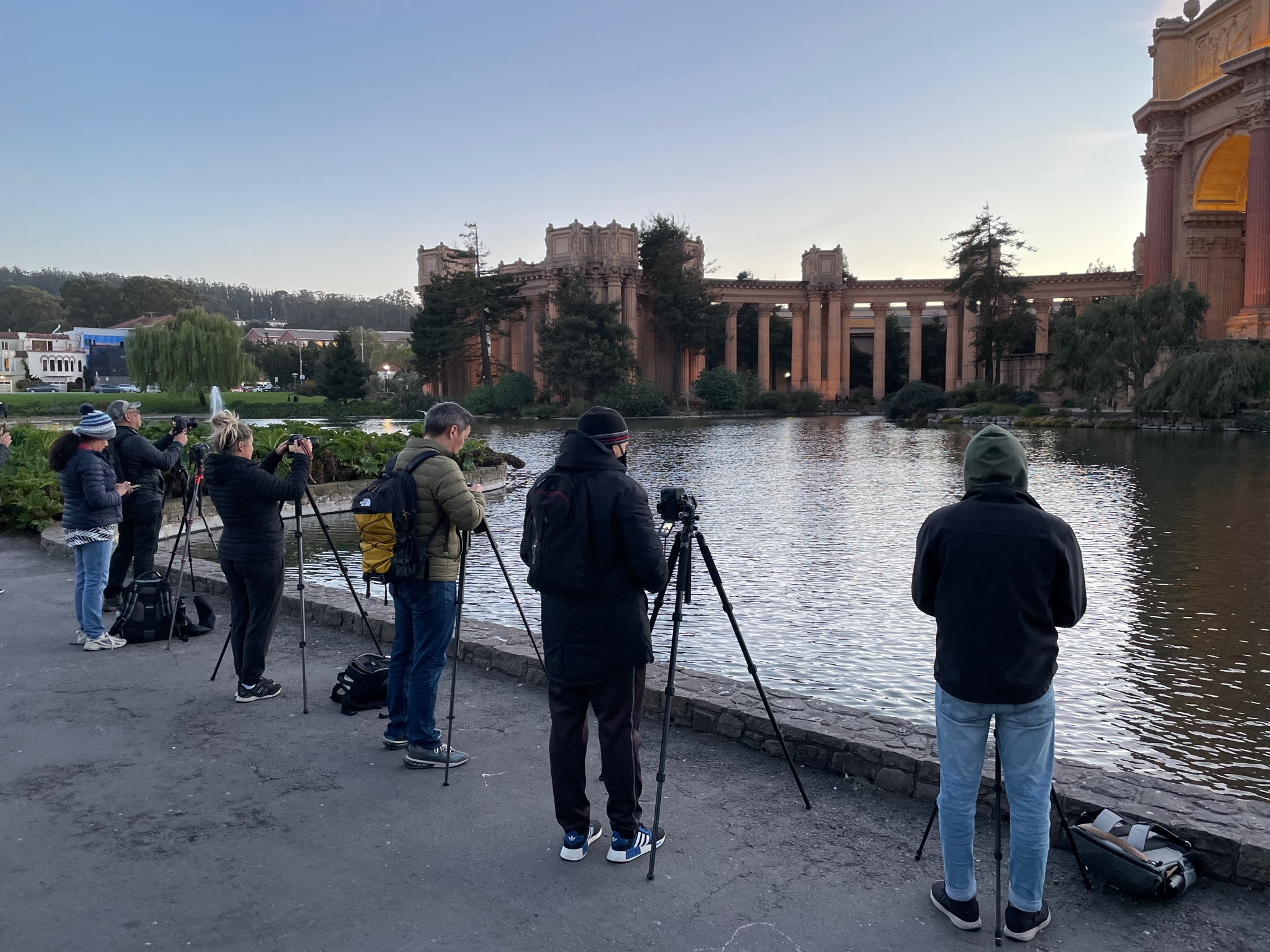 On this beautiful, yet brisk and breezy afternoon, our group of six photographers met near the banks of the lagoon of the historic Palace of Fine Arts. After a brief round of introductions and discussing the overview for the evening, we had lots of daylight left. This allowed us time to wander the beautiful grounds and shoot pictures of the architecture and details. We were also able to shoot the sun set dropping behind the gorgeous dome. As darkness approached, our group gathered in front of the lagoon. We discussed camera settings for long exposures to flatten out the water and get reflections. Before long, daylight was gone and we had a beautiful blue hour sky while the golden lights of the palace shone brightly.

From there we were off to our next stop. Following a short drive, we arrived at the crookedest street in the world. Lombard’s brick roadway adds great texture to the images as we worked on more long exposures. The S shaped curves are what we were able to capture with the cars headlights and tail lights passing by. From this part of Lombard Street, there were also great views of Alcatraz Island, Coit Tower and the Bay Bridge. We focused not only on shooting the downhill traffic, but we walked partway down the hill to capture the traffic as we shot in an uphill direction as well. Seeing lots of smiles as people looked at their camera screens, we knew we created some great images. We briefly discussed the next location and then we were off. 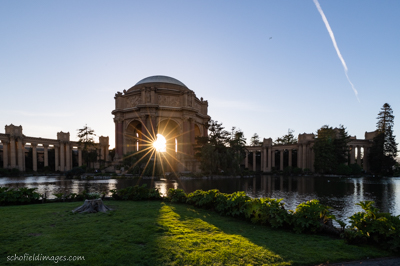 We headed to the San Francisco waterfront. Along the Embarcadero, we set up at a location where we could see the Bay Bridge, the bay, the light at the Port of Oakland and the awesome light art display on the bridge. Old pilings in the water made for a great foreground element. We even had time to shoot some traffic on the roadway, focusing on long exposure lights trails. After working multiple compositions in this area and experimenting with various camera settings, our whole group was having fun!

After spending time along the waterfront shooting traffic, the bridge and the bay, it was time to move onto our final stop of the night. We headed across town and crossed the Golden Gate Bridge into Marin County. From the Sausalito side of the Golden Gate Bridge, we were treated to the always impressive view of the majestic structure. We continued to work on long exposures and compositions. We even had time to experiment with some light painting, which is always fun, and can be a great technique to incorporate.

And just like that, the workshop was ending. The expression, “Time flies when you’re having fun”, rang true tonight. Lots of frame worthy images were captured. As it was after midnight, everybody packed up and headed to their homes and hotels to get some rest. It was another fun workshop with interested, engaged and great people!