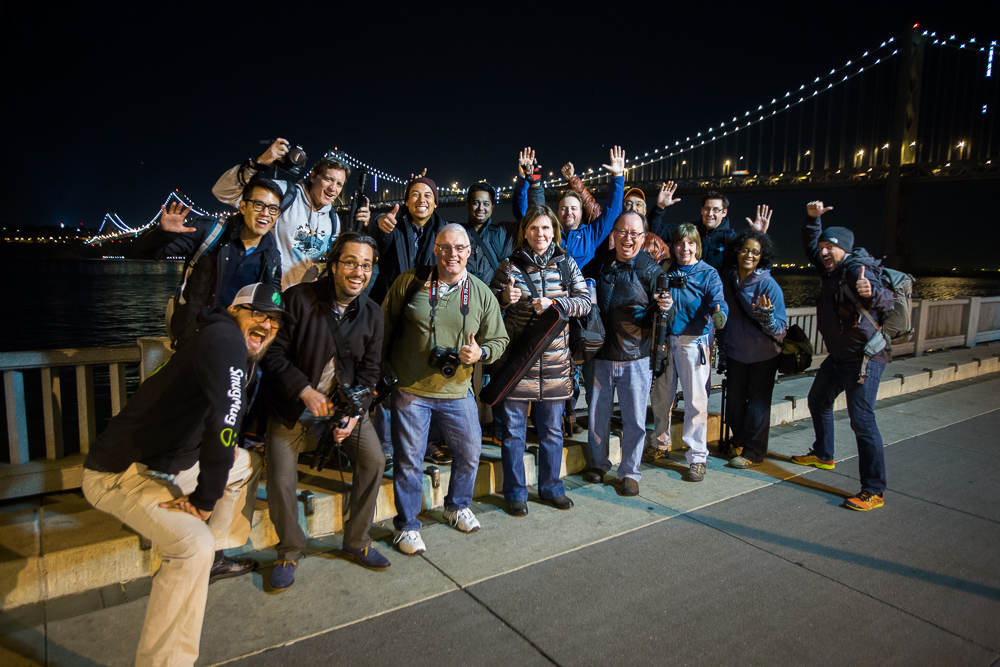 Oh the fun of night photography, it’s one part adventure, one part artistic endeavor, and one part technical problem that needs solving. Many folks like the adventure part and idea of creating something aesthetically pleasing with their camera, but the challenge is the technical aspects. Here at the Aperture Academy we’re here to help folks have the adventure, put them in front of some artistically amazing locations, and then most of all…we’re here to help with the tricky settings of the camera.

Scott and I met a group of photographers who were eager to spend a night in San Francisco looking at the sites, and working on their art. After a brief orientation we loaded up into our van and set off for the city. Our first stop was the ever popular and beautiful Palace of Fine Arts. Here we set out along the pond that flanks this massive structure and were able to capture the reflections of this architectural wonder in the water, which helps to give our compositions an added bump of color. Here we cover a lot of information. Aperture, shutter speed, ISO, white balance, compositions, and even a little bit on bracketing and when it is useful for capturing the full range of a scene. The class was great and everyone got some really nice images of the palace. We also took the group underneath the dome of the structure to work on some abstracts and symmetrical images of the different textures and shapes around this part of the building. There’s so much to see here, it’s really a feast for the cameras. 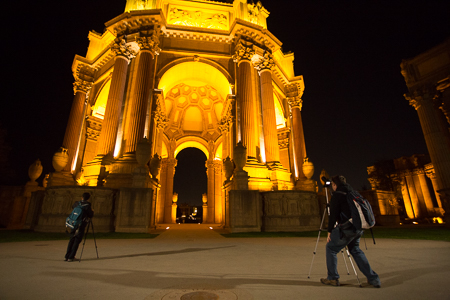 Our next stop was Lombard Street. Here we broke the group up and worked on shooting headlights and taillights of cars moving down the city’s ‘crookedest‘ street. The goal here is longer exposures to get the car lights streaking, and help give some real interest to the images. Of course we cover the aperture and white balance settings necessary as well. While shooting we saw a first, someone driving UP the road…on a moped, which we’d never seen before on this street. After driving it to the top he turned to drive back down and promptly crashed his moped on the road. Other than totally destroying his ego, he was fine and drove off no worse for the wear.

Our third stop on this adventure was the Embarcadero and a shot of the Bay Bridge. This shot of the Bay Bridge is probably one of the more iconic shots in the entire city at night, and having it makes your night portfolio that much better. Old pier pilings sit just off the walkway giving the shots a stunning foreground to compliment the amazing bridge. Lights from the city of Oakland give the sky a nice warmth and really tie the image together. Everyone loves these shots, and it’s fun to see them ooh and aaah as they see their work arrive on the tiny LCD screens. 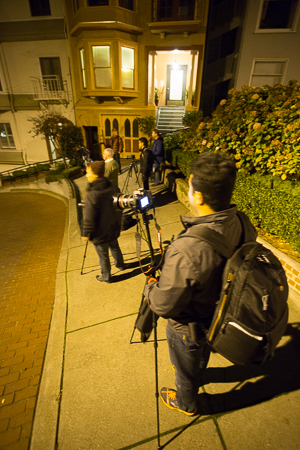 Scott and I help folks to change up compositions a little, tweak some settings here and there, go over white balance again, and really try to make sure we’ve reinforced all of the material we cover during the night.

It’s late by this point but what night shoot of San Francisco would be complete without stopping at the Golden Gate Bridge…we pull off in the Marin Headlands for one last stop. The bridge looks amazing from many vantage points in these headlands, but we pick one that requires very little walking and almost immediately folks are dialed in shooting this icon of the US. The settings here are very similar to those we’ve been using a majority of the night so we just cement the steps with folks and allow them some time to adjust things, see how they change the photos, play with different white balances, and compositions…it’s a lot of fun to see the class really starting to get a hang of things by now…and excited to get back home and process all of the images they’ve gathered over the night.