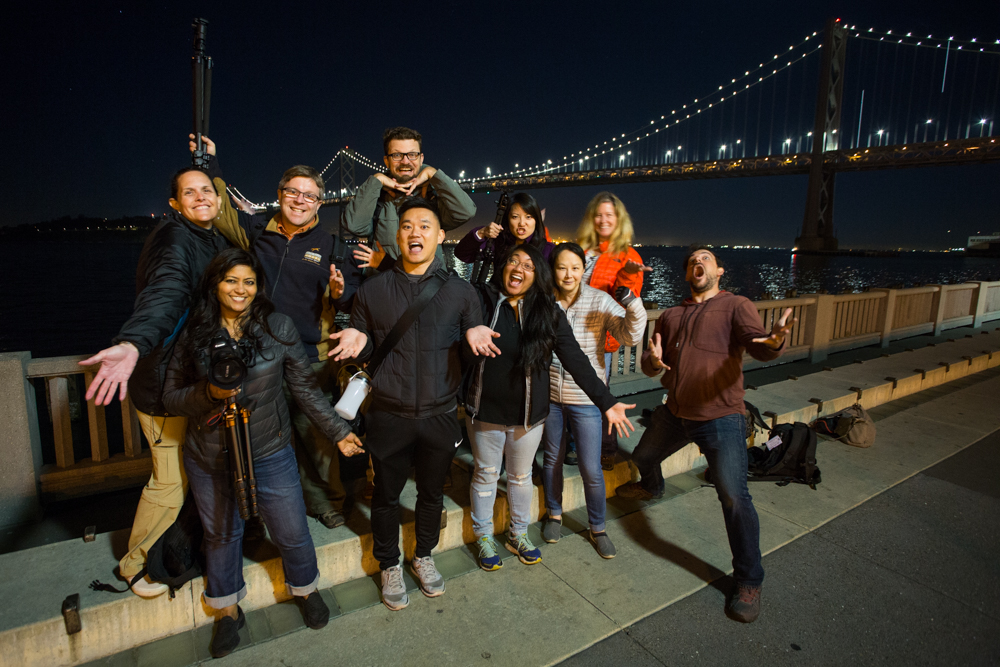 Whenever I have the fortune to drive into San Francisco at night I'm always blown away by how beautiful the city is. It's truly one of the iconic cities to view at night. It also gets me to thinking about my earlier explorations with night photography and how time consuming it was to get any good images. Film would take time to get developed, and it was often weeks after the shoot before you knew whether you had gotten the image you were visualizing. With the invent of digital photography, and the progression of digital quality, night photography has become a great way to capture amazing scenes of cityscapes at night. There's a small learning curve with night shooting, so the Aperture Academy specializes with helping photographers learn the ins and outs of shooting after dark.

Scott Donschikowski and I met a group of 8 photographers for a night of fun exploring all San Francisco has to offer. After a brief orientation we set off to our first location, The Palace of Fine Arts. This building was originally crafted for the World Expo in the1930s, and designed to be temporary. The locals loved it so much that they ended up rebuilding it with more permanent materials. Now it's one of the icons of the bay district. The reflections, and the great balance of light between the orange of the illuminated structure, and the blue of the twilight make this image really one to oooh and ahhh over. Scott and I help the class get all their settings dialed in, and work with them on tweaking compositions. While the light fades and the darkness descends on us, we help the group to adjust settings, and explain to them the difficulties associated with this time of night. 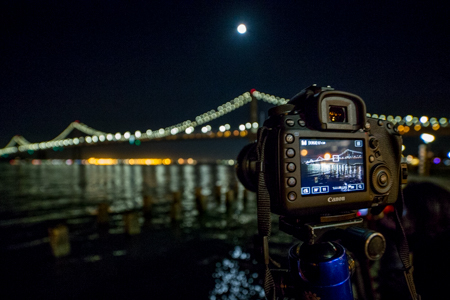 While working over our first scene, we heard some pretty annoying smacks on a local car…turns out, someone was trying to break into a nearby vehicle. With the help of another photographer on the scene we called the cops, and helped to chase the guy away. One of the perks of photographing with a group is the added safety it provides.

Our next stop for the evening is the twists and turns of Lombard Street. The goal here is to work with the students to get streaks of headlights and taillights as they work their way down the road. There's a few different ways to go about this, and Scott and I each teach a slightly different way to do this. For many, this is the location where the shots they create start to amaze them, and they really get excited.

The next stop is one of the bigger icons within the city…a shot that was entirely popularized with the popularity of digital photography. The Bay Bridge with the old pier pilings is one of the three or four most popular night shots in the city. By this point the concepts of what we teach are starting to sink in and the class can really set to experimenting with other aspects of night shooting like white balance, and different compositions. I think every photographer has seen this shot,` so when they get a chance to create one for themselves, and it looks like the images they've seen online, well, they're excited. 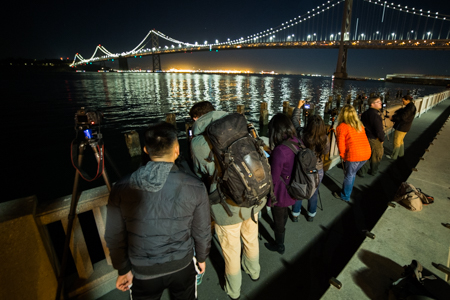 No trip for night shooting in the city would be complete without a stop at the Golden Gate. We conclude our night with a visit to the Fort Baker fishing pier…here we get a great shot of the bridge, and a pretty decent shot of the city as well. Overall we've seen a lot, stopped a crime from happening, making us creative, justice warriors…what more could you ask for on a Friday night in the city?