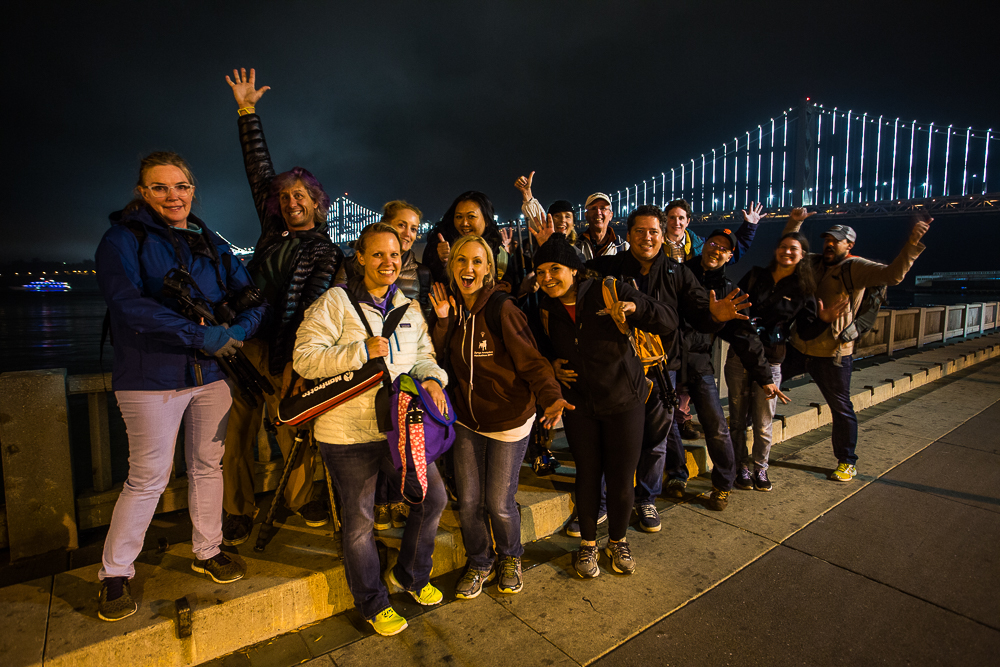 San Francisco is one of the most beautiful and most photographed cities in the world. By day, people are scurrying around catching trolleys, riding bikes, and also piloting those infernal yellow GoCars. But by night, most of the tourists vanish from the streets when the night lights come on, which makes that time the perfect time for "Night Owls."

Once a month we hold a workshop navigating the night in San Francisco. It's a great way for people to come together in a large group and experience a different take on photography.

Teaching this particular class with me was fellow pro-photographer and instructor Joe Azure, who I would consider the foremost expert on shooting in San Francisco. After a brief round of introductions at our meeting place in Sausalito, we headed out toward our first stop across the Golden Gate Bridge.

Fog was present above the bridge, but it looked pretty high and more overcast than foggy. As the sunset hour approached we disembarked at the Palace of Fine Arts, a gorgeous monstrosity of Greco-Roman construction. The lights on the architecture were just beginning to come on as we setup across the reflecting pool. I spoke a few words about composition and camera setup, and then Joe and I began to help out the individual students.

It's nice to get to the Palace at blue hour, or right after sunset, but before total darkness. The fading blue light mixed with the warmth of the lights flooding the Palace looks awesome and once the darkness sets in, the magic is gone, so it's wise to get there early. We definitely arrived early, however, we were greeted by thick fog overhead. As night wore on, we left for greener pastures. 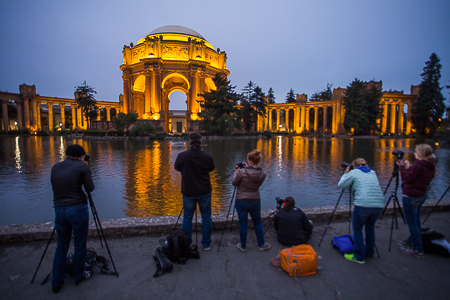 Our next stop of the night was the switchback section of Lombard street. The elegant way these switchbacks have been constructed are a draw for all kinds of tourists and photographers alike. Once there, we split the group in half and I took the bottom section looking up and Joe took the reverse.

The reason this particular section of Lombard street is so magical is because at night, the many cars that traverse this section of road can be used as light painting objects. We can use the headlights and taillights of the cars to create light streaks up -- or down -- the street in any given photo. Using longer exposures, like 30-60 seconds, these streaks of light literally run through the frame following the curves of the street. We just need cars! Actually taxis are best with their big advertising light bubble on the roof. After a plethora of tries, countless cars, and many many photos, it was time to move on.

Next stop, Embarcadero! Along the waterfront directly north of the Bay Bridge, there lies the perfect vantage point. The bridge sweeps from right to left across the bay to Yerba Buena Island and beyond. Directly in front of us, there lies a grouping of old pier pilings, which will provide the perfect foreground for this shot.

First, Joe and I gathered everyone together for a group shot, and then it's off to capture the scene. The high fog had come all the way south to the bridge and the lights from Oakland could be seen reflecting in them. This is absolutely essential, as no clouds would leave us with dark black skies, which makes the whole scene with much too much contrast.

We showed everyone how to capture this scene using some more techniques, like using a cable release to shoot for longer than 30 seconds. Or like how to setup a tripod against a railing so you don't see the railing. Well with only one real vantage point, our group made quick work of the shot, and before long we were back into the van making our way back to Sausalito.

Joe and I had promised earlier that if we had time, we would try and shoot the Golden Gate bridge from the Marin side. As we made our way across the city, only the deck of the bridge was visible, no towers. We proceeded with fingers crossed, but by the time we looked back southward from the Marin side, the bridge was gone. The fog was thicker on this side and was obscuring the bridge completely. Ah well, such is the weather of San Francisco!

Scott, Joe, and the rest of the Aperture Academy crew